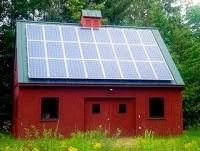 Colorado, USA — When it comes to solar energy there’s a lot of confusion about size. Still in its infancy, industry claims of “first” and “best” are reminiscent of two toddlers arguing over who’s dad is bigger

While I don’t expect to sort it all out in one short blog, some perspective is in order.

The easiest scale to relate to is rooftop and its what most of us imagine when we think of solar.

The average residential rooftop solar photovoltaic (PV) system is between 2-5 kilowatts (kW).  Pictured at left is a 5.5 kW rooftop system in Vermont.  It’s about the maximum size you’d need to meet 100% of an average household’s electricity needs (with batteries of course, for night and cloudy days). 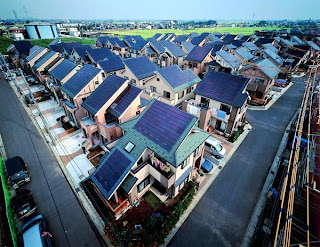 While we lack the policy incentives that much of the developed world enjoys, residential rooftop is still a win-win in the U.S.

A new report by from the Lawrence Berkeley National Lab found that going solar increases the value of homes equal to the amount of investment.  That’s in addition to the direct savings on energy bills owners enjoy while they live in their solar powered home.

The price of solar panels has been in  steady decline.  The expected 50% decrease could put solar on a par (called “grid parity) with fossil fuels in the very near future.

The next leap up in the solar generation scale is commercial.  The possibilities for commercial scale rooftop and ground-mounted solar are unlimited. 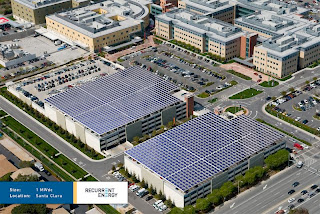 The picture on the left shows a 1 MW commercial rooftop installation, part of a planned 15 MW commercial project in Santa Clara, CA. and one of 16 installations on hospitals, parking lots, and administrative buildings owned or leased by Kaiser.

Our vast urban landscapes offer millions of acres of “solestate” (did I just coin that term?) like the industrial rooftops and brownfields shown in this Google map of Denver’s east side.  This is a very tiny glimpse of Denver’s commercial rooftop potential, but see more here.

Commercial and industrial zones have few shade trees or residents who might object to large solar arrays in their back yards.  Large onsite commercial projects avoid the need and inefficiencies of long distance transmission, burdensome permitting processes and can be permitted, installed and connected to the existing grid in very short order and can save business millions in energy costs.

Because of these advantages, utilities (especially municipal) are moving towards larger scale distributed generation at, or close to the point of use. 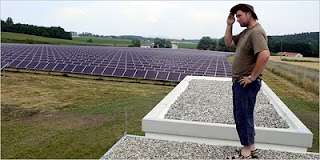 According to Clean Energy Authority, the project will be developed on multiple sites, “scattered around the county.”  Larger than most distributed generation projects, 60 of the 80 MW will come from dozens of sites ranging from 1 to 4 MW, with the average around 2 MW.   The 30 remaining MW will be built at three locations in Eastern San Diego County. One installation will be 20 megawatts and two will be 5 megawatts each.

According to the report, “the solar farms are designed to be near local substations to help alleviate the need for central plants and big transmission lines”.  In addition, developers have “partnered with farmers or ranchers and found idle land” for sale or lease to install the solar arrays. 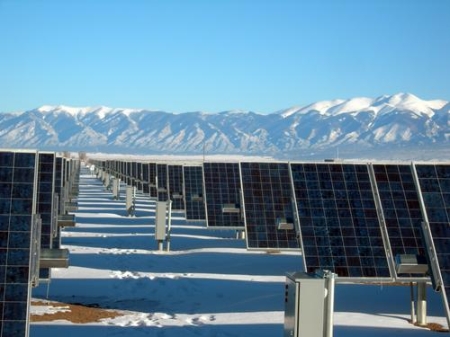 Moving up; “Utility” scale is the most confusing.  The term is generally used to describe free-standing solar “farms” that vary greatlyin size.

This familiar 8.2 MW SunEdison plant (right) in the San Luis Valley is an example of a small end utility scale solar farm, also considered “distributed”.  At less than 20 MW, these installations can be sited near existing substations with a relatively small footprint. 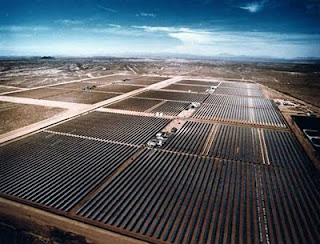 In contrast, massive, remote central-station solar power plants, like those being proposed on public lands throughout the southwest (including the San Luis Valley) are also called “utility” scale.

Industrial solar is an attempt to squeeze solar into an “old energy” central station model that many predict will not survive the new energy revolution.  Even David Crane, CEO of NRG Energy, a majority holder in the troubled Ivanpah Solar Electric Generation Station (ISEGS) in the Mojave recently told Forbes, “We think over the next three to five years the solar business will migrate heavily from a utility-sized solar business to a more distributed solar model driven by consumer demand not by government largesse.”

Despite the fanfare over industrial scale solar generation, examples of distributed utility generation are popping up everywhere. 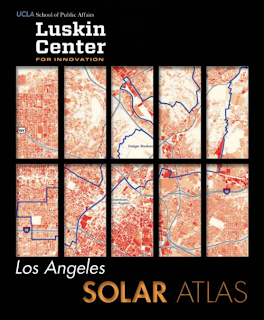 A recent UCLA Luskin Center study found that Los Angeles has the potential to generate as much solar energy from rooftops as it uses. New distributed projects are underway and a 75 MW Solar Feed-In Tariff pilot is expected to spur more explosive growth.

Large scale distributed generation may be the “Golden Mean” of solar generation in the US. It offers a more organic model of energy production and distribution that matches the ubiquitous nature of renewable resources.

Like the human body, a honeycomb or an ecosystem, many, small installations (like cells) interconnected throughout our urban “demand centers”, provide a far more resilient and efficient model for a new energy world.

Fibonacci was on to something.