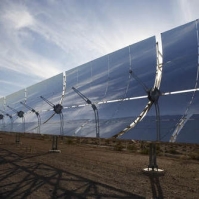 The principle of solar thermal power is sound: Focus the sun’s energy on heat fluid-filled pipes, then transfer the heat and produce steam to run electricity-generating turbines. Cost, however, has prevented this promising clean energy technology from contributing more to the nation’s power grid.

Solar thermal electricity can cost more than twice as much per kilowatt-hour (kWh) as gas and coal electricity. This is partly because the organic oil-based heat transfer fluids used currently tend to break down at high temperatures (over 400°C), which prevents solar thermal plants from running at maximum efficiency. Inorganic fluids, on the other hand, maintain stability at high temperatures, but freeze easily — a problem in the extreme desert environments where solar thermal plants are located.

Because it relies on energy from the sun, solar thermal energy is generally unavailable during times of peak energy usage in the early evening. The ability to select a heat transfer fluid that could collect energy and release it at a later time would provide plants with more flexibility in meeting energy needs.

Under an $11 million grant from the United States Department of Energy (DOE), more than a dozen organizations and academic institutions have been called on to develop improved methods for thermal energy storage, and will spend the next three years developing new, breakthrough materials that will help solar thermal power generation compete with gas and coal-powered electricity.

What’s exciting about this project is that the DOE is giving scientists the opportunity to develop a new material that could revolutionize a critical component of the nation’s mix of clean energy solutions. The key to this solution will be for scientists to develop a “solar salt” that will combine the high-temperature stability common to salt solutions with the low melting point of organic fluids.

Currently, organic, oil-based fluid in the pipes has a maximum temperature threshold of 400°C, allowing for the production of electricity at approximately US $0.15/kWh. The DOE hopes to foster the development of an advanced heat transfer fluid that can operate at temperatures that range from 80°C up to 500°C.

The new heat transfer fluid, when used with other advanced technologies, could significantly decrease solar electricity cost to as little as $0.05-0.07 per kWh. Lower costs would make solar thermal electricity competitive with gas and coal and would offer a clean, renewable source of energy.

Finding a salt that meets the technical specifications and the economic constraints will require scientists to investigate the full spectrum of potential eutectic behavior in combinations of nitrates, nitrites, sulfates and carbonates. Such work as been impossible to conduct using conventional research methods and technologies. It is a combinatorial problem, involving the screening of thousands of salt formulations to determine their thermal stability and melting points.

Though the process of screening thousands of formulations can be daunting and time consuming, researchers have reverted to using a unique and effective research method that has been widely deployed throughout the pharmaceutical industry for the purpose of drug discovery. Researchers will incorporate advanced high-throughput experimentation (HTE) techniques to help rapidly identify active compounds faster than could have ever been done before the development of current HTE methods. Through extensive primary screening work, teams will now be able to map the thermal properties of eutectic salts, which means that scientists can select formulations appropriate for thermal storage or other applications where specific thermal properties are desired.

Teams plan to screen approximately 5,000 samples during a six-month primary screening phase. The most promising formulations from this phase will undergo more detailed characterization over another year to optimize the formulations. The final phase of the project will pilot the formulations in field tests at Sandia National Laboratory in Livermore California, with the objective of developing a new advanced heat transfer fluid candidate for mass commercialization in the solar thermal power industry.

The end goal of this project is to deliver a more efficient and cost effective source of renewable energy that will enable us to use domestic sources for energy. Developing solar power to be delivered at a cost that is affordable to most Americans will only facilitate and increase the demand and development of solar energy within the U.S.

It is programs like these that validate our nation’s commitment to research, increasing the potential for breakthrough discoveries in this critical area of clean tech power generation, an area with such immediate global impact.

Richard Boehner is the President of Symyx Technologies High Productivity Research business unit. He joined Symyx in 2007 to lead the application of its microscale, parallel experimentation and advanced informatics technology for large and small molecule contract research services.  Previously he served in corporate development and strategic planning roles at Sun Chemical Corporation, MacDermid Incorporated, Great Lakes Chemical and Allied Signal. Mr. Boehner has a B.S. and an M.B.A. from Colorado State University.