Things are bad for those who breathe air these days, and things will probably get a lot worse before a change in behavior is forced upon humankind. This is because despite demonstrable evidence of climate change, despite the fact that natural gas is not a clean energy source and despite the fact that building more nuclear facilities takes longer than installing solar and costs more, governments are once again turning to the old polluting and expensive standbys to power our world.

Changes in behavior are difficult because deep down most people do not want to change particularly if it appears that change will ask something from them such as learning new ways of doing things and conserving energy or water.  Unfortunately, for most of its history humankind has treated its scarce resources (oil, natural gas, water) as if these resources are in endless supply.  In the case of water, countries in Latin America are in the midst of drought, U.S. states are in drought, countries on the continent of Africa have suffered decades of drought — in fact, most of the world is experiencing one form of drought or another.

As for energy production, humankind’s habits and refusal to rapidly change to clean sources of energy and to conserve have accelerated the earth’s warming to the point where a making a change in energy sourcing behavior is critical.

Luckily, the sun is not a scarce resource.

From 2008 through 2013 demand for photovoltaic installations grew by a compound annual rate of 44 percent, a significant achievement by any set of standards.  Given that this extraordinary growth has come despite significant downward price and margin pressure for demand/supply industry participants and that the grid-connected sector continues to require subsidies/incentives and government support of some kind, the achievement is even more profound.

The global solar industry, including all of its technologies and stakeholders, competes against heavily subsidized and incentivized conventional energy in an era when the necessity to make a rapid switch to cleaner energy technologies and a dramatic shift in behavior is at a critical juncture.

Energy users will need to accelerate conservation efforts and use more renewable technologies to ameliorate, to some extent, an accelerating climate disaster.

And in this new water and energy resource conservation era, solar technologies are well placed to take share from conventional energy as the world’s population makes difficult and monumental shifts in behavior.

To successfully make the switch to cleaner technologies governments must invest in education, must encourage and reward conservation and must invest in solar and other renewables as well as storage technologies and it must do so in an insecure economic climate also rife with political upheaval.

Continuing to choose the status quo or an all-inclusive energy policy will not be enough to alter the coming climate crisis, a crisis that, again, involves water and energy. For these reasons alone, growth in solar deployment is inevitable.  It remains to be seen if it will also be timely, profitable and result in high quality, reliable, cost effective deployment of solar technologies globally.

The Inevitability of Solar

A change to nonpolluting, reliable energy sources will happen and those who are arguing against this change now will in the future be admitting that they were slow to understand and accept the necessity of the change.  These people will likely be the very companies with businesses based on fossil fuel production.  They will use solar for cathodic protection, to power the pipelines and drilling equipment — in fact, they are doing this now.  They will produce the technology (cells, modules, etc), install the means of production and sell the electricity at a rate they set.

They will not be alone though in owning the means of electricity production because solar is, at its heart, democratic — meaning that customer sighted distributed generation PV encourages energy consumers to own the means of production and control their energy generating future.  Solar is not necessarily about saving money, it is about independence from the decisions others make about energy prices and supply. It means responsibility for conservation.  It means taking responsibility for the electricity that powers our lives.

For the inevitability of solar to happen sooner instead of a lot later the following shortlist is necessary:

Table 2 changes the 2013 forecast to show what is possible if the arguing stops and action begins. The scenarios in Table 2 have changed for 2023 only, with the forecast dubbed: If Things Change. 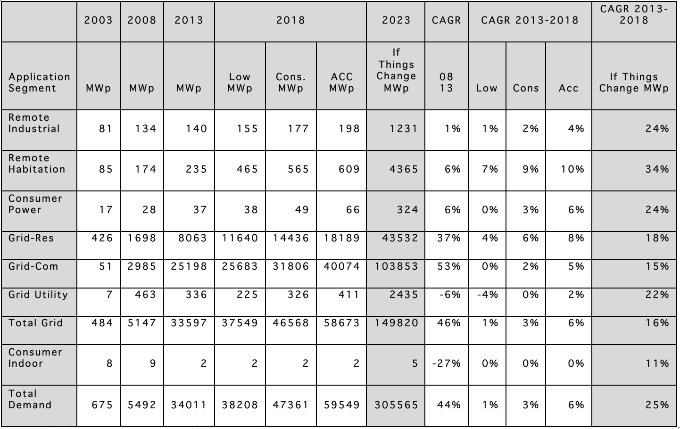 To be clear, the If Things Change forecast can only possibly happen if a major behavior change is encouraged and implemented. Without major change, a major disaster is already coming right at us.  With a major change not only can some environmental damage be avoided or ameliorated, many good outcomes are also possible — such as an increase in water supply (water pumping and desalination) and the availability of electricity to populations in developing countries that would in turn accelerate the economies of these countries.

Solar is inevitable, because a change in behavior is not just necessary, it is required.  It will not hurt to hurry this change along.