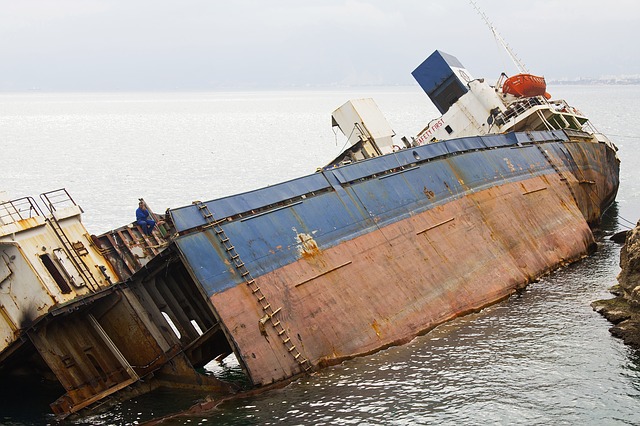 Dustin Yellin, a Brooklyn, N.Y.-based artist whose intricate 3D photomontages adorn the likes of New York’s Lincoln Center, wants to draw your gaze to climate change. Not in a subtle way, either. He plans to stand an oil supertanker on its end in the ground—a structure soaring 1,000 feet into the air.

The Bridge, as Yellin dubs it, would repurpose a piece of energy infrastructure as a ready-made artwork, complete with elevators and a viewing platform for visitors, capturing the sheer scale of our energy system. The difficulty of hoisting thousands of tons of steel into the air would itself symbolize the monumental challenge of retooling our hydrocarbon-fueled civilization in the face of climate change.

The world depends on coal, oil, and natural gas for about four-fifths of its energy—just as it did when I was a boy. Back then, fears shaped by the 1970s centered on what would happen when our vital fuels ran out.

Our actual energy crisis turns out to be one of abundance, not scarcity. We’ve burned 1 trillion barrels of oil since 1980, yet global reserves are almost three times bigger. Natural gas is so plentiful that producers in Texas have been burning it off or even paying customers to take it off their hands. As for coal, the only thing many mines have run out of is jobs.

Carbon emissions are similarly inexhaustible, reaching a record last year. Abstract fears of “global warming” from the ’80s have morphed into the present danger of climate change. Rather than running out of hydrocarbons, we’re running out of time to deal with their pollution.

Our species struggles to grasp gradual change. Tell people the gas pumps have run dry, and they focus in an instant. Tell people their cars produce an invisible gas that will engender biblical droughts and floods—not necessarily where they live—and their attention drifts. Hence Yellin’s skyscraper-size exclamation point.

Similarly, it’s hard for us to conceive of the end of the hydrocarbon era. And yet financial markets appear to be ahead of us on this.

This summer the energy sector’s weighting in the S&P 500 fell below 5%, lower than at any time in the past four decades. That’s quite a show of disdain for a set of giant companies raking in almost $3 billion in revenue every day.

The most recent boom and bust ruined the industry’s reputation with many investors. News flash: This isn’t the first time that’s happened. In the past, though, the ubiquity of fossil fuels preordained that consumption (and prices) would eventually rise and tempt investors back.

Now at least some of them worry that a new deep-water field might end up as a stranded asset in a little changed or shrinking market. Oil majors are deserting prior strongholds, such as Norway’s frigid waters, and going all in on U.S. shale basins, which can be developed in months instead of years. BP Plc’s head of strategy acknowledges that some of the company’s resources “won’t see the light of day.” And members of OPEC, whose power always rested on the geological lottery of vast oil reserves, find themselves relying on the support of nonmember Russia to shore up their diminished credibility.

Hydrocarbons, dense with energy and intertwined with so much of our existing infrastructure, remain formidable incumbents. Roughly 150 years old, the oil business is still capable of sprightly disruption: Look at what hydraulic fracturing of shale hath wrought. Coal, an even older industry, isn’t quite so vigorous—global demand peaked in 2013—but nor has it gone gently into that good night, especially in Asia.

Above all, hydrocarbon consumption is just big: Last year we burned oil, gas, and coal with an energy equivalent of almost 12 billion tons of oil. Like The Bridge, it’s hard to get your head around the scale.

But in a transition, scale only tells you where you are; marginal growth points to where you’re going. Rather than focus on the mountain, get a feel for the gradient of travel.

Harry Benham, an oil industry veteran turned consultant, presents this as a math problem. Primary energy consumption grows at about 1% to 2% a year, and that rate has trended downward, more or less, since the 1960s. That’s linear growth, meaning the world’s sources of energy, no matter how big or small, must fight for a slice of that shrinking sliver of extra demand over time. Wind and solar power, while small, are expanding at a ferocious clip: 23% a year, compounded, over the past decade. Which means they grab a bigger share. Having generated less than 2% of the world’s electricity a decade ago, wind and solar will likely surpass nuclear power this year or next.

This collision course is driven by cost. Less than a decade ago, shale frackers needed maybe $100 a barrel to break even. Now some need less than $50. Impressive, but the all-in cost of solar power has dropped 85% since 2010, and BloombergNEF forecasts an additional 63% drop through 2050. In two-thirds of the world, up from 1% five years ago, new solar and wind projects undercut new plants that use either coal or natural gas.

If you think oil is safe in its internal-combustion fortress, consider that electric models accounted for all the growth in passenger-vehicle sales last year and are forecast to do the same this year. Again, it’s scale vs. growth. Sales of traditional gas guzzlers, while still 80 million-odd strong, have declined. And investors, technology talent, and research and development budgets tend to start backing away from little changed or shrinking markets, no matter how big they are. Energy stocks are out of favor not because they’re no longer dominant; they clearly are. But mortality has begun to creep into risk premiums.

Despite the falling costs and growing market share of renewable energies, they still lack the killer app: a price on carbon emissions that would expose the frequently hidden costs of fossil fuels. Conventional wisdom holds that Americans, especially, wouldn’t stand for that.

But aside from President Trump professing ardor for “beautiful” coal, few people love hydrocarbons—when was the last time you fist-pumped at the prospect of a trip to the gas station? Most folks don’t even care about energy. What they love is what it provides: light for dark streets, cool offices on hot days, and, of course, the ability to travel. These hallmarks of modernity—the ends, not the means—persuade us to tolerate the drawbacks.

One is pollution. In the past, when society reached tipping points on industrial nasties such as leaded gasoline or smog, government acted to curb them. Carbon emissions, invisible and with a slow, diffuse impact, are of a different order. Even here, however, sentiment is shifting, and that gradient of public tolerance is steepening.

For example, oil majors’ relatively recent touting of renewable energy investments may strike you as “greenwashing.” The point is that they’ve acknowledged that man-made carbon emissions cause climate change. That particular cat won’t go back in the bag.

It’s also easy to dismiss Pope Francis’ recent convening of oil bosses in the Vatican as political theater. But as Kevin Book of Washington-based ClearView Energy Partners says, the church epitomizes conservatism and tradition: “The activists are already persuaded about climate change, and now the Vatican is, too.” In a pleasing irony, the pope pushed the case for climate science in the same building where Galileo was tried by the church for his own bit of scientific insight.

Even in the U.S., where discussion of climate policy so often regresses into theological positions of “believing” or “disbelieving” scientific consensus, there are signs of a shift. Polls show rising concern about the dangers of climate change, particularly among younger voters. The Green New Deal may be a mere scrap of a proposal, but it’s nonetheless dragged the politics of climate left. There’s no chance anything like the #GND will be enacted into law while Kentucky Republican Mitch McConnell runs the Senate. But Democratic presidential primary candidates now speak openly about scrapping the filibuster precisely to push through legislation on issues such as climate change. If the past few years have taught us anything, it’s that while nothing is a given, nothing is fixed, either.

The same applies to the seas on which fossil fuels are shipped across the world. In June, Trump unleashed a tweeted torpedo at the Carter Doctrine when he questioned the U.S. Navy’s role in ensuring freedom of navigation, especially for oil tankers.

Homo hydrocarbon is largely a product of the American-led free-trading era after 1945. Absent the U.S. Navy policing sea lanes, it’s debatable whether oil-importing countries would have allowed themselves to rely on barrels shipped from the Middle East and other hot spots. Yellin’s supertanker is a product of this: a bulk-storage technology adopted after the 1956 Suez Crisis, making it economical to ship oil on longer routes avoiding such chokepoints. Yet these lumbering leviathans wouldn’t have been feasible without the implicit protection of American sea power.

Today, with its shale-inspired sense of energy dominance, the U.S. is rethinking this. China’s planners have taken notice of the potential change: It’s one rationale for Beijing’s pro-electric-vehicle industrial policy. Likewise, faced with the upheaval of the Arab Spring and collapse of Venezuela, oil producers such as Saudi Arabia are trying to remake themselves for a world where oil’s primacy and U.S. backing aren’t guaranteed.

Like the shadow that The Bridge may cast one day, darkness is gathering on the hydrocarbon horizon. There will always be those who doubt climate change, but their platform is literally burning. Even many fossil fuel producers have leapt to politically safer ground. The end of the dominance of hydrocarbons begins with the end of innocence about their hidden costs. The implications of this knowledge will only grow.

Hydrocarbons achieved their preeminence on the back of one overriding imperative: growth. Growth in wealth, living standards, and population. This is how the 20th century world was made, and it’s why we fretted about energy running out. It’s also why we could ignore the environmental and political costs of an energy system that wastes two-thirds of its input as heat.

Now we know that such growth, unchecked, will ultimately undo us. A central argument for fossil fuels’ continued dominance is that humanity will surpass 10 billion at some point, and all those people will want something like the Western living standards built over the past 100 years on the back of coal, gas, and oil. Yet what a poverty of imagination this betrays, especially in light of climate change, which hits the poorest hardest. How can that be the pinnacle of civilization? What even constitutes “higher living standards” in a world where the costs of our existing technologies are so transparent? Far from securing hydrocarbon dominance for another 100 years, the needs and aspirations of future generations demand it give way to something more sustainable.

Denning writes about energy for Bloomberg Opinion in New York. This column doesn’t necessarily reflect the opinion of Bloomberg LP and its owners.