There is a growing realization in the New Energy community, accentuated by the failure of the Copenhagen summit and subsequent finger pointing about blame for the failure, that the world’s last best hope is New Energy.

This list of 2009’s most important changes in New Energy is encouraging because there is no really bad news on it. Everything in New Energy generally seemed to grow and get better last year. This is especially impressive considering how bad the economy was for most of the year.

Part of the reason was the Obama administration’s stimulus package and general support for New Energy. Department of Energy investment was $36.7 billion. Anticipating support from the federal government to keep the New Energies growing, venture capitalists and corporate investors stayed with them as well, putting over $4 billion into startups. It was half what was invested in New Energy in 2008 but it kept the innovation going.

In addition, the smart grid began its deployment with pilot projects, solar got cheaper and wind kept growing. All in all, 2009 suggested New Energy may just be ready to step up and do for the world what its budding international governance system is still too immature to accomplish, that is, head off the worst impacts of global climate change. 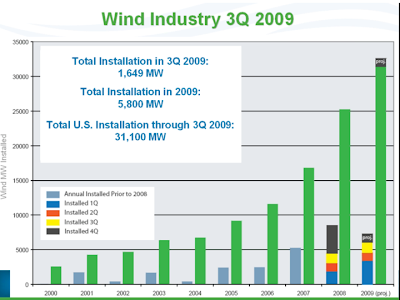 Nobody has figured out how to stop wind in recent years, though the recalcitrants in Congress have been working on it. (click to enlarge)

Greentech Media’s top 10 changes in the New Energy industries in 2009 were… ::continue::

Time is short and the need is enormous. The failure at Copenhagen was the clarion call to every member of the community from the rooftop solar installers to the laboratory engineers designing bigger better wind to the deep research policy analysts to the folks waiting for battery electric vehicles before they buy their next car: It is time to build New Energy everyday with both hands and determined hearts! 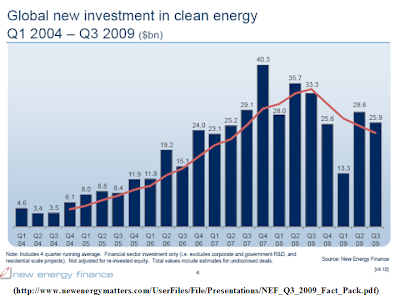 This post is based on The Top Ten Emerging Trends of 2009 by Michael Kanellos, December 9, 2009, Greentech Media