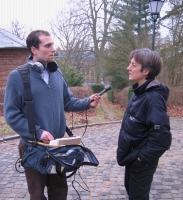 Hamburg, Germany [RenewableEnergyWorld.com] Walking down the cobblestone pathway that connects the buildings of the Potsdam Institute for Climate Impact Research (PIK), Dr. Brigitte Knopf looks up at the white stucco Einstein Tower looming above her, the white building in stark contrast to the gloomy December skies of Germany.

Built in 1920, the spaceship-like observatory was designed to celebrate the mysteries of the universe that Einstein was helping to uncover. Einstein even did some gravitational research on the campus of the Potsdam Institute before moving to the United States in 1932. Today at PIK, researchers like Knopf are working through another difficult issue that rivals the importance of the work done by Einstein: Solving the climate crisis quickly and economically.

Knopf, who primarily studies the economic impact of climate change mitigation efforts, is working on a Regional Modeling Comparison Project that examines the feasibility of different climate stabilization scenarios. She works closely with economists like Dr. Ottmar Edenhofer, the deputy director of PIK and co-chair of Working Group III at the Intergovernmental Panel on Climate Change, to find the most aggressive, common-sense solutions to the world’s greatest environmental problem.

Back in one of PIK’s conference rooms, Knopf unveils the first assessment models, which include a colorful array of graphs illustrating the technological and economic details of four climate protection strategies through the year 2100. The first scenario is the baseline, which assumes no action. The next three scenarios look at how to stabilize CO2 levels at 400 parts per million (ppm), 450 ppm and 550 ppm over the next 90 years.

Within each scenario, Knopf mixes and matches a variety of technological options that include fossil energies, nuclear, renewables, energy efficiency and carbon capture and storage. The idea is to factor in as many technologies as possible and determine their effectiveness as they relate to one another in the entire mix.

“There is no silver bullet. But what we see from our modeling results is that mitigation of climate change, this is possible,” says Knopf. “The models show that this is technically feasible — and perhaps more important — also economically feasible.”

According to the models, the impact of these mitigation efforts on the global economy would be moderate, representing a range of between a one percent gain in global GDP to an almost two percent loss, depending on how and when the scenario is implemented.

“This makes me very optimistic from this point of view that we can do something,” says Knopf.

Hanging around climate scientists with such a positive mindset can make the solutions seem easy; that is, until the politicians and various interest groups come to the table.

Meanwhile, about 200 miles away in Pozna?, Poland, political leaders from all over the world are working out a framework for a climate change mitigation strategy. EU leaders contentiously disagree on how to structure their own region-wide goal of reducing carbon emissions 20 percent below 1990 levels by 2020.

German Chancellor Angela Merkel, the head of a country that has long been considered a leader in climate and renewable energy policies, is causing a stir by announcing that Germany is pulling back from earlier commitments to the structure of a carbon cap and trade program. In order to protect Germay’s large industrial base from higher carbon prices, Merkel is urging the EU to give away more allowances than originally proposed.

Without additional protections, argues Merkel, steel manufacturers, chemical producers and shipping companies could lose their competitive edge, thus shedding jobs. Her position has steadily shifted over the last year as the EU works out the details of its carbon reduction plan.

Both climate protection advocates and detractors have criticized the German government for its inconsistent message to the international community.

Back in Hamburg, sitting in an office overlooking the city, Peter Lindlahr, head of central coordination on climate issues for the city, reflects on the direction of the European climate negotiations, partly driven by Germany’s evolving stance on giving away emissions permits to companies in the industrial sector.

“Angela Merkel…said that jobs come first and then climate — and this is the wrong message,” says Lindlahr. “It’s her responsibility to keep the jobs through progressive and innovative climate strategy.”

It’s also Lindlahr’s job to keep the jobs in Hamburg through climate protection efforts. He helps manage a yearly budget of €25 million that funds renewable energy and energy efficiency projects around the city, with a goal of reducing emissions 40 percent by 2020. So far, the program has helped create new jobs, bringing total employment in the city’s renewable energy sector to 3,500.

Chancellor Merkel has been lambasted by climate scientists and activists for weakening the framework and allowing certain industries a free pass. Other members of the business community say that Merkel has not gone far enough in changing the targets — a stance that could damage the competitiveness of the largest exporting country in the world. Merkel has bounced back and forth, trying to appease both sides.

“As long as we have no clear position toward the mechanisms of emissions trading, it’s very difficult to establish something meaningful,” Lindlahr says. “We need to have a clear message as we move into the Copenhagen climate conference next year.”

Despite the backtracking at the Pozna? talks, Germany is still recognized as one of the most progressive countries in addressing climate change, especially compared with the U.S. stance over the last eight years. As part of its commitment to the EU 20 percent target, Germany has a goal of reducing carbon emissions 30-40 percent by 2020, depending on how effective other EU countries are at reaching their targets.

Lindlahr recognizes the important role that Germany will play as developed countries debate how aggressively to tackle climate change. But the election of Barack Obama as the next U.S. president will dramatically change the dynamics of negotiations, he says.

“We cannot say we are the opinion leader [in climate change]…I think America will have a very dominant role in the next few years, or in the next few months. I mean, the new administration, they will have a strong approach on the whole debate,” says Lindlahr.

One week later in Brussels, European leaders sign a 20 percent emissions reduction agreement that seems to have struck a balance between the competing interest groups. But this is only the beginning — in one year the United Nations Framework Convention on Climate Change will take place, marking one of the most important and complicated negotiations the global community has ever seen.

The next step for Germany and other European countries will be to forge a close relationship with the U.S. and craft a meaningful climate protection strategy that satisfies all parties. That goal, says PIK’s Knopf, may be more difficult than figuring out any of Einstein’s theories.

Back at the Potsdam Institute, Knopf fixes her gaze from the Einstein Tower to the ground, thinking deeply about the challenges ahead.

“We know that the solutions are available. But the political process is very complex and will certainly make it hard to implement them,” says Knopf. “We just hope that the politicians in Germany and in other countries will stay committed.”

In December 2008, as part of a trip organized by Inwent, RenewableEnergyWorld.com Podcast Editor and Staff Writer Stephen Lacey, traveled through Germany and met with the country’s political leaders and renewable energy industry executives. This is the first installment of his three-part series on renewable energy and climate change from the German perspective.

For an audio program exploring the German perspective on the industry, listen to the December 21st edition of the Inside Renewable Energy podcast. This podcast is a great opportunity to hear from the experts in a fun and engaging way!