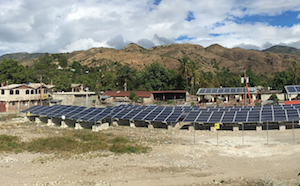 On Tuesday at DistribuTECH in San Diego, Calif., experts debated the future of microgrids with a large focus on the economics of these distributed energy resources and energy management systems.

Using the U.S. Department of Energy definition of a microgrid — a group of interconnected loads that can connect and disconnect from the grid — James Mader with the United Illuminating Company; Neetika Sathe, with PowerStream; Raj Chudgar with Viridity; Shiv Mani with the Federal Energy Regulatory Commission (FERC); and moderator Ken Horne with Navigant Consulting laid out their views on the future of microgrids in North America and around the world.

The challenge for microgrids is not engineering, said Chudgar. The challenge is the soft costs, he said, i.e., legal, regulatory and financing.

The panelists said that just about every microgrid that exists right now received some sort of grant funding or special incentives to make it economically viable but they pointed to five existing business cases where they believe microgrids make economic sense today.

From a utility perspective, one business case for microgrids exists for customers at the end of a line. If for whatever reason electricity delivery to an end point on a grid is subpar, up until very recently the only option for utilities was to build another line, said Chudgar. He believes that public utility commissions are going to start asking about the alternatives to building new lines.

“That’s probably one of the leading drivers from a utility perspective for where microgrids make sense,” he said.

A second business case can be made for powering critical services. These include facilities like water treatment plants, gas distribution lines, hospitals — places where if the power goes out, people can lose their lives or major disasters can occur.

“If those facilities are at risk then there is an opportunity for a microgrid as well,” said Chudgar.

A third case can be made for commercial and industrial (C&I) customers who might have concerns about their electricity bill.  When you stack the revenue that a microgrid can offer — ancillary services, selling power on the wholesale market, carbon emission reduction and more — Chudgar said it is worth at least examining how a microgrid might be able to alleviate some financial strain for a C&I customer.

Sathe of PowerSteam (now Alectra) said another business case for microgrids is when a utility is experiencing load growth and is considering building another substation.

“It’s about time we study the alternatives,” she said.

PowerStream has found that a centralized microgrid that connects to an existing substation and covers about 90 percent of the load can often make economic sense.

“And the last 10 percent you distribute to the edge of the grid through residential solar and storage or C&I microgrids. Spread it out and then you get your ultimate value,” she explained.

Finally, microgrids can be very good at firming intermittent renewable energy said the panelists, especially in regions where the amount of wind and solar on the grid is creating problems.

“I think that’s a huge value right there,” said Sathe.

Of course every region in the world is unique. As Navigant’s Horne pointed out, in Sub-Sahara Africa where there is no grid whatsoever, microgrids as a replacement for candles make a lot of sense.

Mani also pointed out that at least one bank is studying how to create a standardized microgrid contract similar to the standard contracts that were developed in the early days of utility-scale wind power. Standardization of soft costs could help reduce microgrid costs going forward.

It’s worth noting that of the five speakers, three were undergoing a business transformation at the very moment they were speaking at the conference. Ormat is purchasing Viridity; PowerStream, a Canadian utility, is finalizing its merger with four of its counterparts in Ontario and will become Alectra; and the chairman of FERC just resigned. Though completely coincidental, the disruption at their organizations is a fairly good mirror for the state of the energy industry today.

New technologies and changing customer expectations and regulations that force utilities to lower carbon emissions continue to paint a new picture for the role of the utility. No doubt the role of microgrids will increase in the future.