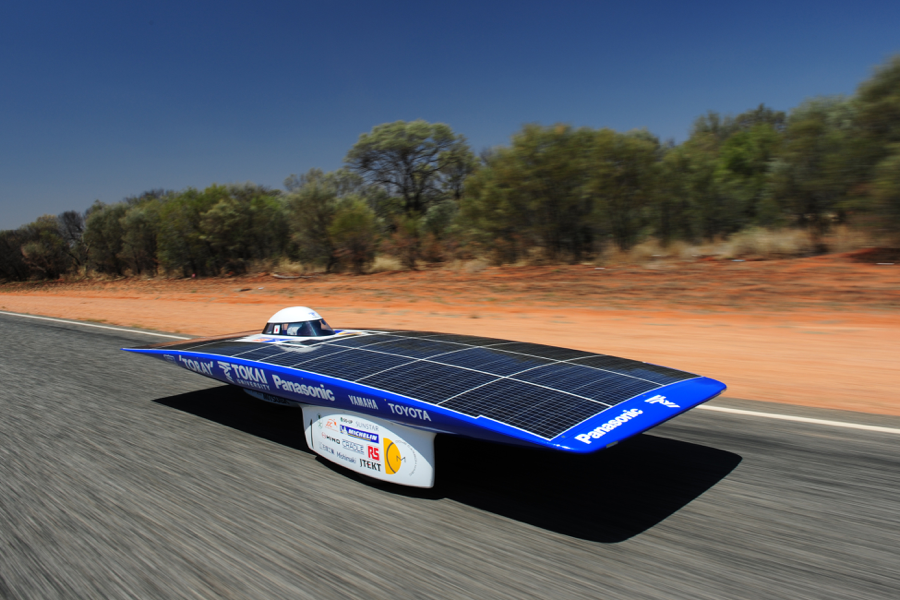 With the prices of solar and electric vehicle (EV) batteries predicted to continue falling even as the cost of fossil fuels rises, many industry experts — including Tony Seba, author of “Solar Trillions” — are forecasting the inevitable rise of solar power in consumer and industrial markets. But those projected developments aren’t just in the residential energy sphere. The dropping costs, coupled with advancements in efficiency, may very well lead to a stronger likelihood of marketable solar-powered cars being developed in the near future.

Stella, the first completely solar car designed for normal road travel, reached the U.S. in 2014. While it is a definitive leap in the right direction for solar-powered cars, the car does not reflect the aesthetic styling of traditional American sedans. What Stella does show, however, is that solar-powered vehicles are fully capable of competing head on with conventional vehicles.

Stella can travel up to 500 miles on a single charge. It’s also the first vehicle of its kind created specifically for everyday family use. That update is significant because it shows the development of what was once a racing-only technology for the larger commuter market. Though Stella may not be as nice to look at as other cars, it does show how manufacturers and researchers are beginning to meld performance and specialty technology for consumer use.

While Toyota has yet to develop a car that runs exclusively on solar power, the company has spent several years making advances in the field of solar energy. Their motor sales location in Ontario, Calif., for example, was the largest single panel solar array in North America at the time of its construction.

In terms of solar automotive development, the 2010 Prius was the first model to offer a solar-powered cooling system. The ventilation functions separately from the vehicle’s motor and works to keep the interior of the vehicle cooled, even when parked. This smart feature, which automatically activates as soon as the interior of the car passes 68 degrees Fahrenheit, gives further insight into the future of solar power in consumer vehicles, especially in terms of aesthetic integration. Unlike Stella’s design, the Prius panels have already been fully incorporated into the vehicle’s traditional styling. Toyota is proving that solar can be melded into auto design without drastically changing the look and feel that consumers have come to expect from modern vehicles.

As the general public grows more aware of the current climate crisis, the push for clean technology has increased along with it. Consequently, 60 percent of Americans now live in an area where electric vehicles are cited with producing even less greenhouse gases than hybrids. There’s clearly a demand for clean transportation — it just comes down to how fast the technology can keep up.

Companies like ReVision Energy are working to bridge the gap between electric cars and existing residential solar technology. ReVision offers Level II electric vehicle charging stations that can be wired to draw energy from rooftop solar arrays, allowing users to charge their electric cars with renewable energy. As the cost of residential solar arrays becomes increasingly more affordable, this option is great for those concerned about the use of grid-drawn power. It doesn’t offer a viable solution for long-distance travel, but for short, single-charge journeys, it serves as a smart workaround.

Although no manufacturers have fully committed to mass producing fully solar family-style sedans just yet, it’s obvious that the market is aware of the need for sustainable automobile options. Projects like Stella and the Toyota Prius’ solar features have proven the viability of solar energy within the transportation industry, and the push toward environmental consciousness won’t be letting up anytime soon. And whether or not the industry produces fully solar cars in the coming decades, one thing is certain: the future of sustainable transportation looks bright.