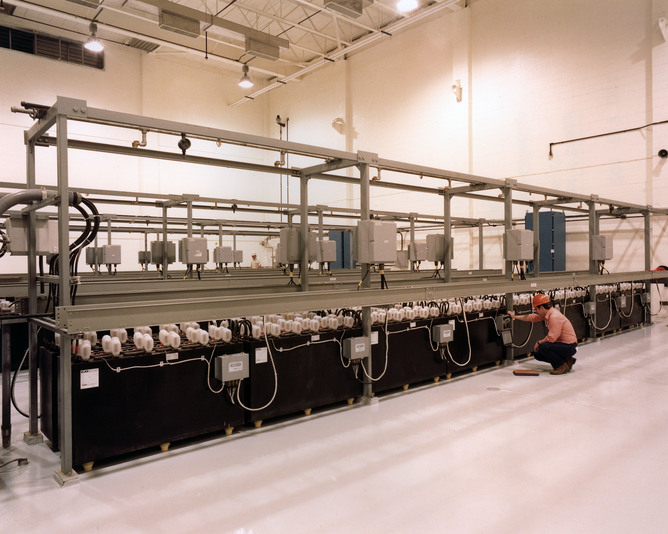 Wind power and solar power are ways to reduce carbon emissions, but these generation sources are dependent on the vagaries of the weather, which means neither wind nor solar can produce electricity on-demand at all hours of the day. This variability has led many to assume that greatly expanding wind and solar to reduce carbon emissions will cause electricity costs to skyrocket and require expensive energy storage.

My colleagues and I have just published a new study to show that this assumption is not correct. In fact, if the U.S. were to move to a national 48-state electric system, rather than the regional one in place now, the country would be able to transport more renewable energy around the country. That change could reduce CO2 by 78 percent at lower costs than today without using any storage technologies.

Using a computer model, we found that this larger electric system would utilize power more efficiently regardless of the generators within it. The cost reduction between the national style system we modeled and the current one, which is divided into about 130 regions, is US$47 billion per year. That translates into an electricity cost of between 8.5 and 10.2¢ per kilowatt-hour (kWh), compared to the current national average of 12.7 cents per kWh.

Our study was based upon a model called the National Energy with Weather System (NEWS) simulator. The NEWS simulator is a cost optimization model that relentlessly seeks the lowest-cost solution.

It includes features of the electric grid, such as transmission, generators, electric demand, land use constraints, generator behavior, weather data and cost data for generators. To figure out how to minimize costs, the NEWS model will calculate how to supply power every single hour for an entire year based on the available generators and transmission lines that transport power long distances.

Our model had something unique, though: a high-voltage direct current (HVDC) transmission overlay.

In concept, this is very similar to the interstate highway system overlaid upon the road network. HVDC technology has one big advantage over traditional power lines: there is less energy lost in transporting power from one point to another. It does this by using direct current, rather than alternating current, and operating at higher voltages.

HVDC is being used in the U.S. today. However, it is being deployed as a point-to-point system for single (or a few) generators to distant markets. One of the most prominent is called the Pacific DC intertie, which ships power from the Pacific Northwest, with its abundant hydropower, down to Los Angeles, supplying 48 percent of power during hours of peak demand. The difference in the NEWS model is that HVDC is deployed in a network, instead of a simple point-to-point configuration, which allows much greater utilization of the lines for power to flow between regions in multiple directions. 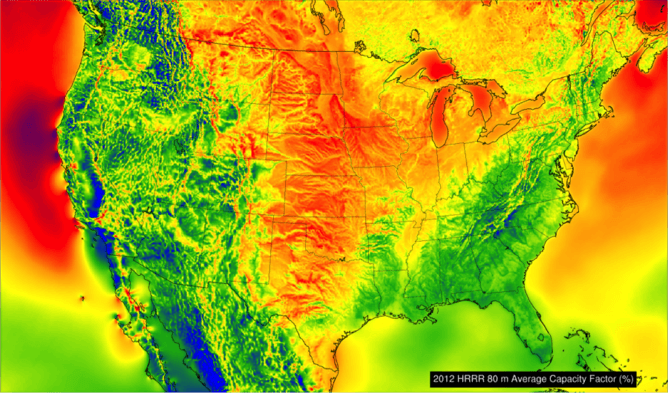 Critically, the NEWS model doesn’t assume that more transmission lines should be added to the current grid. But it does introduce new transmission capacity if the model deems it economical. Interestingly, the NEWS model always selects HVDC transmission when it can. Why? The availability of HVDC lines allows bigger markets to form, which then benefit from economies of scale.

In practice, this would mean that wind generators in the Plains states, for instance, could export more power to places in the country where there is strong demand, such as big cities. As it is now, wind generators only support power regionally and sometimes supply more power than is needed at some hours of the day.

With a national system, the generators can be strategically placed over the contiguous U.S. to reduce this effect and lower the overall costs. The HVDC facilitates the movement of this electricity from distant reaches to cities with lower losses than traditional AC.

To perform the study, high-resolution weather data were compiled for each hour of the three years from 2006 through 2008. The weather data were then used as inputs into sophisticated power algorithms to estimate the power that could be generated by wind turbines and solar PV panels across the U.S.

Additionally, we compiled data on electricity demand during those times across the U.S. The data were needed because weather is a fundamental driver of the electric demand. Then we projected demand data to 2030.

Because the deployment of wind and solar is subject to many constraints, we built land use considerations into the model. A land use data set was compiled to identify locations where the wind and solar can be deployed without interfering with protected lands.

Using these different sets of data along with the projected cost for power generation in 2030, we ran different simulations to investigate how these factors would affect the mix of power generators regionally while minimizing total cost.

The scenario that cuts emissions most has significant wind and solar PV deployed; 523 gigawatts (GW) of wind and 371 gigawatts of solar PV compared with 60 GW and 2.5 GW, respectively, in 2012. In this scenario, there was only 461 GW of natural gas (less than today).

Again, this solution is the cheapest possible solution.

To get to this level of solar and wind – a significant jump from today’s levels – does require new transmission lines in the model.

The amount of new HVDC transmission that is built by the model is 139 million MW-miles, which is a big infrastructure undertaking. This sounds like a huge amount, but it would represent only 4 percent of the total cost of the system annually.

What about energy storage?

The NEWS model is unique in the study of integrating higher levels of wind and solar because it handles huge volumes of weather data, while computing the important aspects of the electric grid such as ramping constraints on generators, down times for generators, power flow in the transmission lines, electric losses shuffling power around the system, meeting demand at each hour in every market and other operating constraints. Further, the model doesn’t exclude any technologies; it seeks only the lowest-cost options.

Electricity can be stored in a number of ways, such as pumping and releasing water from reservoirs or installing large battery banks. In initial model runs, electric storage was not competitive using cost estimates for 2030 compared to adding transmission or natural gas generators (purely based upon cost).

A battery bank used to store electricity from the grid. U.S. Department of Energy

The NEWS model is a tool to help understand how an electric grid could be transformed while keeping costs low. Low cost is absolutely essential because increasing energy costs to reduce carbon reductions can cause economic hardships.

There are numerous headwinds to the development of a decarbonized economy and society. But, the NEWS model has shown that wind and solar PV, combined with high-voltage direct current transmission, can actually go a long way in reducing emissions in the electric sector.

To remove carbon from the entire economy, electricity must be decarbonized first. If it can be done at low cost, then other sectors will be able to follow suit. Combining wind, solar, natural gas and transmission is a possible bridge to a zero emissions future.