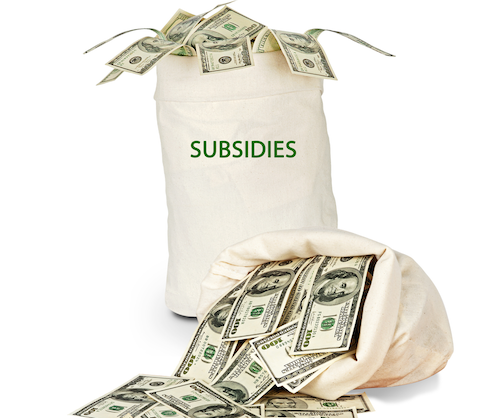 As world leaders converge on New York for a United Nations gathering that’s expected to have a strong emphasis on climate change, the OECD is pointing out 800 ways rich industrial nations support fossil fuels with taxpayer money, along with a handful of countries that are catching up quickly.

The measures were worth $167 billion last year for the oil, natural gas and coal industries, according to the Organization for Economic Cooperation and Development, a Paris-based institution that advises 34 industrial nations. While that number has fallen from almost $200 billion in 2012, it easily exceeds the value of subsidies for renewables such as wind and solar.

The findings released Monday are designed to stimulate debate on what constitutes fair support for energy technologies. World leaders including U.S. President Barack Obama and his Chinese counterpart Xi Jinping are attempting to ratchet up ambitions for a global deal reducing greenhouse gas pollution. The UN-organized negotiations are expected to yield an international agreement in Paris in December. The OECD report suggests policy makers burrow into their own tax and spending measures for a solution.

“We’re totally schizophrenic,” Angel Gurria, the OECD’s secretary-general, said at a press conference in Paris on Monday. “We’re trying to reduce emissions, and we subsidize the consumption of fossil fuels. These policies are not obsolete, they’re dangerous legacies of a bygone era when pollution was viewed as a tolerable side effect of economic growth. They should be erased from the books.”

The report covered OECD member nations plus six developing economies outside the group — Brazil, China, India, Indonesia, Russia and South Africa. It expands on a 2013 assessment and on the work of the International Energy Agency, which put the cost of fossil fuel subsidies at $548 billion in 2013, down 25 percent from the year before.

The IEA report includes countries from the Middle East and Africa such as Qatar, Iran and Nigeria that top other rankings of big subsidizers. It looked at how consumer prices vary from market prices, while the OECD looked specifically at measures in national budgets that support fossil fuels.

“If other developing countries were included, then the total would be much higher,” said Angus McCrone, senior analyst at Bloomberg New Energy Finance in London. “The reassuring point from the OECD report is that although it found attempts to reduce fossil-fuel subsidies running into inertia, it also concluded that support is now on a downward trend.”

The measures counted by the OECD covered some of the most obscure pieces of national tax codes — including direct controls on gasoline prices, depreciation allowances for oil drillers, breaks for refiners, credits for infrastructure like pipelines and stimulus for technology to clean up coal emissions.

“People are outraged when they find out that their tax dollars are being used to prop up the richest industry on the planet,” said Jamie Henn, strategy director at 350.org, the campaign group founded by environmentalist Bill McKibben to urge investors to divest from high-polluting industries. “Funding fossil fuels is like buying up typewriters at the dawn of the computer age.”

Oil and oil products reaped 82 percent of the support, according to the OECD, with coal collecting 8 percent and gas 10 percent. A plunge in crude oil prices reduced some of the cost of subsidies.

More important were measures taken in India, China, Mexico and Indonesia, as well as most industrial nations, to reduce handouts to forms of energy that produce significant amounts of pollution. India saved 200 billion rupees ($3 billion) from 2012 to 2014 by slashing subsidies for diesel. Indonesia reduced consumer aid for electricity and motor fuels that ate up a fifth of its spending as recently as 2011. In the U.S., Obama has proposed $4 billion a year of savings from reduced fossil-fuel support.

“We’re certainly not saying that all the measures are bad,” since some are targeted to help poor people afford fuel they need, Jehan Sauvage, the lead author of the OECD report, said in an interview. “The key message is to ask if this is the best use of public money. Are these measures the best way to support the goals we have?”