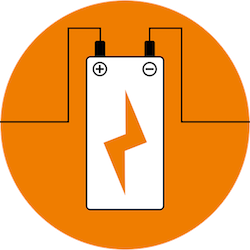 Isn’t lithium meant to be a mood stabilizer?

That’s certainly not what’s happening in the stocks of companies that produce the element used in rechargeable batteries and psychiatric medications. News this week that Tesla Inc. sent a memo to some suppliers asking them for payment rebates to help it become profitable shook shares in lithium miners.

The Solactive Global Lithium Index, in which FMC Corp., Albemarle Corp., and Sociedad Quimica y Minera de Chile SA or SQM have a weighting of about 40 percent, fell as much as 2.1 percent Monday to its lowest level in 11 months. SQM slumped as much as 4.8 percent, while Albermarle dropped 4.1 percent.

Wrong. In truth, Tesla probably accounts for around 2 percent of global lithium demand, and companies that many have barely heard of such as Samsung SDI Co. are far more important players.

It’s not hard to do the math. Most types of lithium-ion batteries contain between 70 grams and 90 grams of lithium metal for every kilowatt-hour of energy output , according to Bloomberg New Energy Finance. Tesla’s cars have battery packs that max out at 100kWh on the Model S and Model X and 75kWh on the Model 3, and its delivery numbers are posted every quarter.

Let’s be conservative and assume that every car sold has the biggest battery available, with lithium concentrations on the high side at 100 grams/kWh. On that basis, Tesla would have consumed about 1,026 metric tons of lithium metal in 2017 – about 2.4 percent of the U.S. Geological Survey’s estimate of 43,000 tons of global supply, and up marginally from 2 percent in 2016. Tesla doesn’t release a lot of detail about its battery chemistry, but if you assume that lithium concentration is a more realistic 70 grams/kWh that share falls well below 2 percent.

Samsung SDI, by contrast, posted 4.3 trillion won ($3.8 billion) of revenue from its energy solutions business in 2017. At last year’s average costs of $209/kWh, that suggests consumption in the range of 1,200 tons to 1,800 tons, depending on concentrations.

Electric vehicles are on the brink of transforming the lithium market, but they’re not there quite yet. Non-battery uses such as ceramics and glass, lubricants, and polymers still account for more than half of demand, according to the U.S. Geological Survey. Even within the battery sector, electric vehicles will only overtake consumer electronics as the largest user this year.

On top of that, Tesla is far from the biggest player in the EV market: BYD Co., BAIC Motor Corp., and the alliance of Renault SA, Nissan Motor Co. and Mitsubishi Motors Corp. all lead it in terms of trailing 12-month deliveries, and BMW AG is rapidly catching up.

Tesla has a web of parts suppliers in Asia, sourcing batteries from Panasonic Corp., factory machinery from robot-maker Fanuc Corp., and valves for ventilation systems from China’s Zhejiang Sanhua Intelligent Controls Co. Panasonic’s stock price remains highly correlated to hopes that Tesla’s ramp-up in Model 3 production will drive future operating profit growth – but going by the numbers, the U.S. company has contributed only about 2 percent of the Japanese electronics maker’s revenue, according to data compiled by Bloomberg.

There’s a lesson in that. The mania that’s driven Tesla to a forward EV/Ebitda valuation of 28.5 – in contrast to a median of 7.8 for the industry, and multiples as low as 1.6 for Volkswagen AG and 3.1 for General Motors Co. – seems to be infecting other markets exposed to the electric-vehicle growth story.

In truth, the likes of SQM and FMC are still closer to being fertilizer companies than businesses on the bleeding edge of the technology revolution. This week’s sell-off may have been caused by an irrational reaction to an only-slightly-surprising update from Tesla’s production hell – but if the result is a more realistic outlook for lithium producers, it could be a healthy development.

Shareholders who want a turn on a Tesla stock switched to ludicrous mode are welcome to take their place behind the wheel. More circumspect investors should be happy to take a ride on equities that corner a little less aggressively.

Anjani Trivedi contributed to this column.

Editors Note: For more on lithium and the energy storage market, check out Renewable Energy World’s recent webcast on this topic: Energy Storage Supply Chain: From Mines to Market