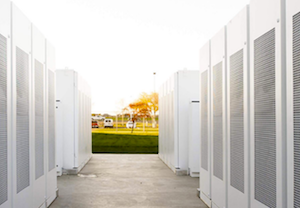 The first European installation of a grid-connected Tesla Powerpack was completed earlier this month in Somerset, south west England.

The new installation integrates five of Tesla’s commercial/utility scale 100-kWh Powerpack (version 1) units alongside a 500-kW solar PV farm, and has the capacity to provide power for over 500 homes.

Dan Taylor, managing director of the project’s developer, UK-based Camborne Energy Storage told Renewable Energy World: “We’re delighted with this step forward. This is our first solar plus storage installation and is already providing energy to the UK grid. The installation is the first of many for Camborne Energy Storage and we see it as an exciting time for the industry.”

Taylor said that the system is made up of five Powerpack units, each discharging the same capacity. The packs are designed to operate in concert to spread the discharge/charge regime and maximize the lifetime of the asset, he added.

Designed with scalability and ease of installation in mind, “the Tesla Powerpacks are modular in design, with the EPC describing them as ‘like Lego blocks’ for building…The installation process was extremely quick,” Taylor said.

“We welcome this exciting project from Tesla and Camborne,” Neville-Rolfe said in a statement. “Innovation in storage technologies will help manage our electricity grid more efficiently, support greater energy security and, crucially, drive down consumer bills.”

The UK is pitched to see an increase in its energy storage market in the near future, in consequence to apparent commitments made by its government towards a more modern, flexible energy system.

Indeed, enabling energy storage was highlighted within a government strategy concerned with establishing ‘a smarter energy system’ published on Nov. 10 at the annual Energy UK Conference.

On that occasion, UK Secretary of State, Greg Clark stated: “The aim is to harness the potential of storage, demand side response and other technologies to create the most efficient, most productive electricity system in the world.”

He continued: “This means reassessing regulation which is biased against storage and aggregators so they can compete on a level playing field with large-scale generation.”

With this context, the Somerset installation represents a small snapshot of progression in the UK energy system. As Taylor described it: “I think we’re at a crucial time in the energy industry in general. With the increase in low carbon energy and the removal of more traditional carbon intensive plant, our system is being managed in a much more dynamic way, all the way down to the distribution level.”

For its part, the Somerset installation will be used for a mixture of power arbitrage, ancillary services and peak shifting.

Keen to capitalize on the opportunities arising with the transition to this new, more dynamic energy landscape, Taylor said his company is confident over seeing more battery storage projects in the near future.

“CES already has several large stand-alone battery sites with planning consent, due for construction throughout 2017,” he said. “Our pipeline in the UK is strong, well into hundreds of megawatts, and we are looking forward to developing these sites to contribute to the low carbon transition. We are also aiming to develop more co-located sites throughout next year.”