One of the hardest parts of blogging about energy storage and vehicle electrification is the inability of some readers to wrap their minds around large numbers. We throw around numbers like thousand, million, billion and even trillion with surprising alacrity, but many fail to grasp their significance because the underlying realities are too big to comprehend.

The other day I stumbled across a website that tracks the national debt and uses the humble second to put incredibly large numbers into perspective:

In the last 12 months the US imported 3.25 billion barrels of oil and produced another 2.13 billion barrels domestically. That works out to a little over 226 billion gallons a year, an incomprehensibly large number. The following graph tracks monthly oil supplies in the US for the last 30 years and shows how slowly things change in the energy industry. We might want things to change quickly, but they can’t because the baseline numbers are so immense. 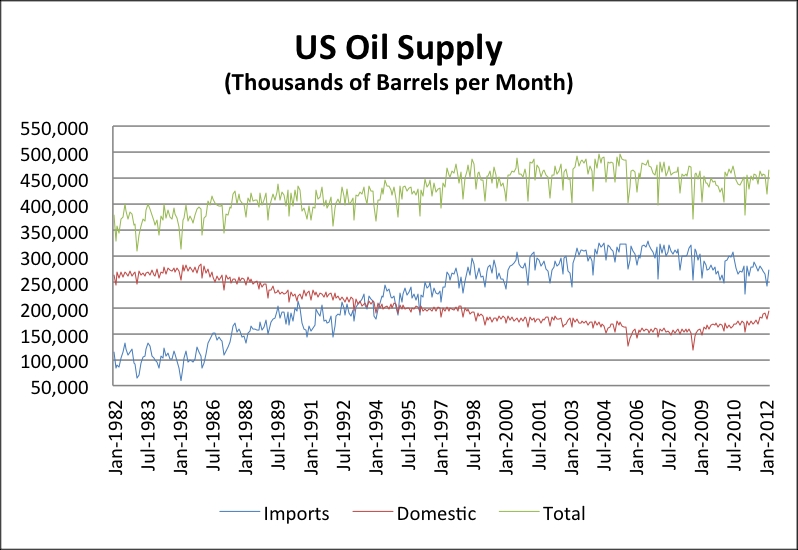 Since hitting a peak in 2005, oil consumption in the US has fallen by about 6% as higher prices encouraged more efficient vehicles and driving habits. During that same period improvements in oil production technology have increased domestic production by about 25%. There are many who think domestic oil production will contribute more to supply than imports by the end of the decade. I hope they’re right because domestic production adds to the economic vitality of the nation while imports are a major drain. Whatever changes the future holds, however, they’re not going to be big or fast. Energy transitions take decades to unfold and while there are no panacea solutions, false promises abound like flowers in an alpine meadow.

I enjoy making fun of electric car advocates who believe that companies like Tesla Motors (TSLA) and its iconic CEO Elon Musk will change the world with ambitious plans to make 5,000 prohibitively expensive toys this year and 20,000 next year if they can find enough buyers. The reason is simple. I know that even if Tesla succeeds the success is irrelevant. The cars it plans to make in 2012 and 2013 would save about a million gallons of gas a year, or two minutes and nineteen seconds on the US oil supply clock. No matter how you slice and dice the numbers, Tesla just can’t matter.

From my perspective the most frightening aspect of Tesla hysteria is the pervasive view that Mr. Musk is some kind of new-age superhero. Earlier this week I got an e-mail from a group that had created a graphic that highlights the life and times of Elon Musk, “The Real Life Tony Stark.” You can access it yourself by clicking here.

My first impression was that the group had a rich sense of humor and had crafted a brilliant parody. As I researched the host website, however, it became increasingly clear that the creators are serious and honestly believe that St. Elon of Palo Alto is a larger than life superhero who can change the world with bold plans and magic beans.

A Branch Davidian or Jonestown mentality is tragic in a religious cult. It’s catastrophic in an investment security because those who believe in graphic novels usually believe in alternate universes where cruel realities like oil supply and demand and the physics of moving mass over distance at speed can change in the twinkling of an eye.

I track both short- and long-term volume weighted moving average prices for all the stocks I write about. At this point I think Tesla’s chart is looking pretty ugly. The Model S was launched in 2009 when Tesla started taking reservations. The deliveries that will start next week are already baked into the stock price. Without a big surge to the upside, a death cross where the 50-day average plunges down through the 200-day average is all but inevitable by the 4th of July. 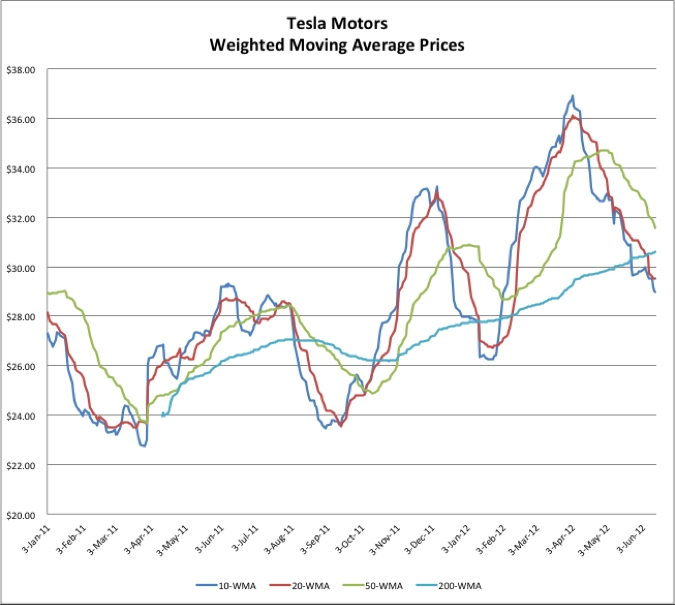 I don’t believe in superheroes and I haven’t read a graphic novel since I was an adolescent. I plan to watch this train-wreck unfold from the sidelines. I’ll be the first to congratulate Tesla and Mr. Musk if they can meet their lofty goals, develop sustained product demand and build stockholder value. I won’t be holding my breath over the risk of a stewed crow dinner.

Disclosure: I have no direct or indirect interest in Tesla and I have nothing to gain or lose from its stock price movements. While I am a former director and current stockholder of Axion Power International (AXPW.OB), a nano-cap company that has developed a robust and affordable lead-carbon battery for use in micro-hybrid, railroad and stationary energy storage applications, I can’t see how the success or failure of a graphic novel product like the Tesla Model S could impact the value of my investment in a company that’s focused on relevant mainstream markets.