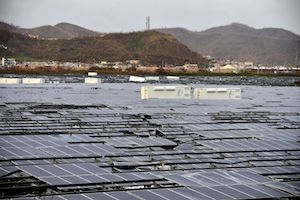 Tesla Inc. is sending to Puerto Rico hundreds of its Powerwall battery systems that can be paired with solar panels in an effort to help the battered island territory restore electric power, the company said Thursday. Some of the systems are already there and others are en route.

The equipment is sorely needed, since the island remains largely without electricity more than a week after Hurricane Maria made landfall on Sept. 20. The company has employees on the ground to install them and is working with local organizations to identify locations.

Tesla makes electric cars and also sells batteries to consumers to combine with rooftop solar systems. It acquired solar panel installer SolarCity last year, and the company sees the combination of solar plus battery-based energy storage as key to its overall effort to accelerate the transition to sustainable energy and wean the world from fossil fuels.