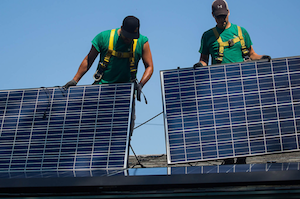 Tesla Inc. is doing away with SolarCity Corp.’s door-to-door sales business as it works to integrate the rooftop solar company it bought for $2 billion last year.

“After careful consideration, we believe this decision reflects what most of our prospective customers prefer, and will result in a better experience for them,” Tesla said in an emailed statement late Friday.

The announcement comes amid a slowdown in rooftop solar installations across major markets in the U.S. The industry has faced pushback from utilities in states including Arizona and California that have sought to cut payments solar customers receive for the power they generate. Annual residential rooftop installations are forecast to increase by about 3 percent this year, down from about 64 percent just two years ago, according to a December report by Bloomberg New Energy Finance.

Tesla said it’ll instead expand retail and online sales of energy products, which include a forthcoming solar roof and the home battery for energy storage known as the Powerwall. Tesla said the “vast majority” of affected workers will be reassigned or provided an opportunity to interview for other positions at the combined company, which now employs about 30,000.