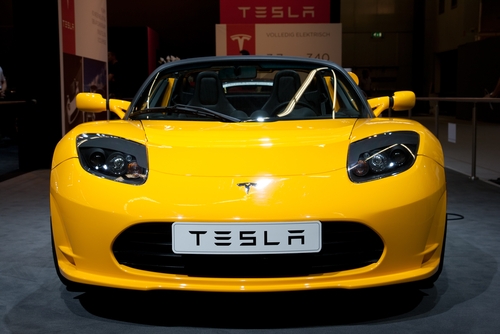 “Then what?” said Dave Sullivan, an analyst for industry researcher AutoPacific Inc. “Now everybody that wanted one has got one, where do they find the next 10,000?”

Tesla is counting on the car to generate the company’s first profit. It can be “cash-flow positive” in 2013 with about 8,000 Model S sales, Chief Executive Officer Musk told shareholders June 6 in Mountain View, California. Tesla plans to deliver at least 5,300 units, including a $57,400 base version, this year and 20,000 in 2013, Musk said.

“In the end, this isn’t about Tesla or Model S; it’s about battery-electric vehicles themselves,” said Eric Noble, president of the Car Lab, an industry consultant in Orange, California. While “Model S is beautiful,” he said, “proof of the very limited potential of battery electrics already exists in the market itself.”

Equity analysts are generally optimistic that Musk can meet his targets. Of 17 analysts covering the shares tracked by Bloomberg, 10 recommend investors buy Tesla and four say the shares should be held. Three recommend selling the stock.

“We continue to view the shares favorably ahead of what we consider is a multiyear product cycle, and thus expect an improved cadence of news flow emerging in the coming weeks to serve as a positive catalyst for the company,” Barclays analysts Amir Rozwadowski and Brian Johnson said in a June 18 report on Tesla.

From 2008 until this year, Palo Alto, California-based Tesla sold about 2,500 of the $109,000 Roadster, a rechargeable sports car made under contract with U.K.-based Group Lotus Plc, the unprofitable automaker owned by DRB-Hicom Bhd.

“Our factory in Fremont has a capacity somewhere on the order of a half-million vehicles a year, so we have lot of growth, a lot of potential to use that asset,” Musk said this month. “I absolutely feel confident we’ll achieve 20,000 unit sales next year, in excess of that,” Musk told a shareholder at the meeting who raised concerns about the volume goal.

U.S. demand for electric-drive cars has so far been less than automakers anticipated. General Motors Co. sold 7,671 Chevrolet Volt plug-in hybrids in the U.S. last year, while Nissan Motor Co. delivered 9,674 Leafs, an electric-car record. Each automaker aimed to sell more than 10,000 of their models.

While Volt sales are picking up this year, with 7,057 sold through May, that’s well short of CEO Dan Akerson’s target of 45,000.

The Volt and Toyota’s Prius plug-in hybrid this year are outpacing the Leaf’s 2,613 sales in the U.S., which Nissan has attributed to distribution problems. Leaf sales should soar to 20,000 in the fiscal year ending March 2013 when the Smyrna, Tennessee, plant begins building it late this year, Nissan Americas Vice Chairman Bill Krueger said in a June 16 interview.

At least a dozen more plug-in models, including Mitsubishi Motors Corp.’s “i” minicar and an electric Focus compact from Ford Motor Co., are entering the market to meet California regulations requiring sale of such vehicles as well as demand from some drivers for alternatives to gasoline-fueled cars.

LMC estimates that while total demand for hybrid and rechargeable vehicles may reach about 7.25 percent of vehicle sales in the U.S. by 2017, only 0.5 percent will be battery-only vehicles, Omotoso said.

“Improvements in conventional gasoline-engine technology are likely to make hybrid and electric vehicles less appealing for many people because of the much higher cost,” he said.

In delivering a car designed and built entirely in-house, Musk will achieve something that has eluded most American entrepreneurs since Henry Ford. Notable failures include Preston Tucker’s inability to build Tucker Corp.’s Tucker sedan in 1948 and John DeLorean’s dream of selling gull-winged DMC-12 sports cars that ended with DeLorean Motor Co.’s 1982 bankruptcy.

“It’s impressive that Tesla has made it into production,” Sullivan said. “They have a very unique business design, and they have partnered up with major companies that want that exposure of doing something different, being on the leading edge of battery propulsion.”

Tesla investors include Toyota, Daimler AG and Panasonic Corp. A contract to supply battery packs and motors to Daimler that began in 2009 helped Tesla survive dwindling funds and rising costs in 2008 that threatened to put it out of business. In 2010, Toyota invested $50 million in Tesla and is buying motors and battery packs from it for use in its electric RAV4 sport-utility vehicle that goes on sale this year.

The company won low-cost federal loans in 2009 worth $465 million to fund a U.S. plant to make Model S and to engineer it and future electric cars. Tesla begins repaying the loans, with interest rates of 0.9 percent to 3.4 percent, late this year.

The Model S rollout will have to be perfect at the start, Sullivan said. The model is aimed at wealthy drivers who are passionate about electric cars and own a number of additional vehicles, he said.

“They have 10,000 orders, but that’s pending production snafus,” Sullivan said. “A bigger automaker has more resources to deal with that type of problem. I’m cautiously optimistic they can have a flawless launch.”

Many Americans are turned off by the high price and limited range of electric cars.

“An electric vehicle simply isn’t an acceptable substitute for the majority of drivers,” the Car Lab’s Noble said. “In the end, there’s only so many people that want these vehicles, and when that pool is depleted, there’s not going to be more of them.”