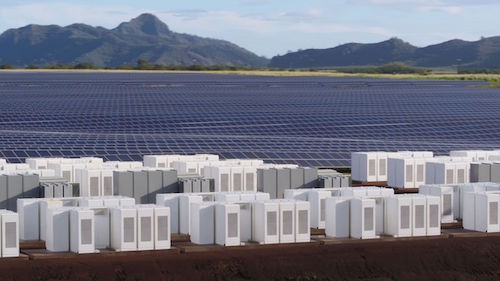 Tesla Inc. has completed a solar project in Hawaii that incorporates batteries to sell power in the evening, part of a push by the electric car maker to provide more green power to the grid.

The Kapaia installation includes a 13-MW solar system and 52 MWh of batteries that can store energy during the day and dispatch it after the sun goes down, the Palo Alto, Calif.-based company said Wednesday. Tesla has a 20-year contract with the Kauai Island Utility Cooperative on the island of Kauai to deliver electricity at 13.9/kWh. That’s lower than the utility’s cost for power from diesel plants of 15.48 cents, and about half the 27.68 cents that consumers paid in December for electricity in the state.

The project is the largest of its kind to be placed in service by Tesla since its $2 billion acquisition of panel installer SolarCity Corp. in November. It underscores the effort by CEO Elon Musk to transform Tesla into a one-stop-shop for clean energy consumers. Musk is coupling solar power with Tesla batteries to provide more reliable energy for utilities and reduce the use of fossil fuels.

Hawaii, which has the highest electric rates in the U.S., has set a goal of getting all of its electricity from renewable sources by 2045. The state, which has relied on pricey, oil-fired power plants, is grappling with how to integrate increasing amounts of intermittent solar on its system. In January, power developer AES Corp. agreed to build a 28-MW solar project with 20 MW of battery storage for the Kauai Island Utility Cooperative.