After a rough start to the year, My Ten Clean Energy Stocks for 2015 posted a strong recovery in February.

For the month, the model portfolio rose 7.9 percent in local currency terms and, 8.3 percent in dollar terms.  For comparison the broad universe of U.S. small cap stocks rose 5.9 percent (as measured by IWM, the Russell 2000 index ETF), and the most widely held clean energy ETF, PBW, shot up 11.6 percent.

PBW (+11.6 percent) is a good benchmark for the value and growth stocks, which underperformed with a small gain of 1.6 percent in both local currency terms and dollar terms.  The six income stocks, on the other hand, gave a strong performance with a 12.0 percent gain in local currency terms and a 12.8 percent gain in dollar terms.  This is particularly surprising because global utility stocks (as measured by JXI) fell 3.5 percent for the month on worries about rising interest rates.  The fossil free Green Alpha Global Enhanced Equity Income Portfolio (GAGEEIP), which I co-manage, also bucked the global utility trend and turned in a 5.5 percent gain for the month.

The chart below (click here for larger version) gives details of individual stock performance, followed by a discussion of February news for each stock. 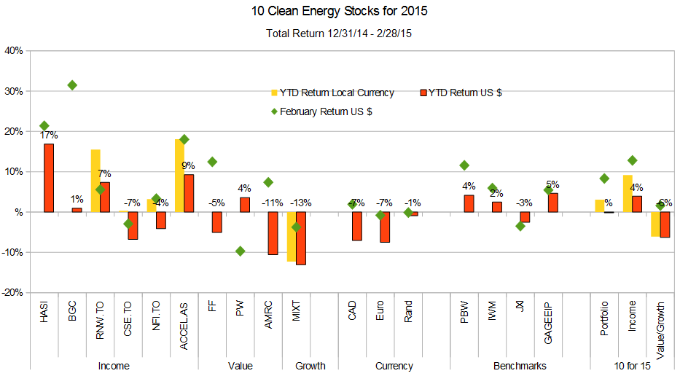 The low and high targets given below are my estimates of the range within which I expect each stock to finish the year.

The stock of sustainable infrastructure financier and Real Estate Investment Trust Hannon Armstrong staged a dramatic advance of 21.4 percent in February.  I believe this advance was catalyzed by an article by Brad Thomas, the author of a leading REIT newsletter.  In the almost two years since its IPO, Hannon Armstrong has been the odd man out among renewable energy yieldcos, because of its REIT structure and focus on energy efficiency financing so different from the higher profile renewable energy project ownership of other yieldcos.  There are also no real comparables among conventional REITs, meaning that HASI has also struggled to catch the attention REIT investors.

Thomas’ strongly positive article seems to have changed that, and now REIT investors seem to be pricing HASI closer to what that would be expected from traditional REITs that have a comparable level of risk.  Not that I’m selling at this point; I’m happy to hold a company that pays a 6.3 percent dividend at the current price, especially since management expects to continue to increase that dividend by 12-15 percent over the next 12 months.

An ironic note to this whole story is that Brad Thomas himself was surprised by the sea-change his article catalyzed.  Reading between the lines of his comments, he made up his mind that HASI was very attractive, but decided to share his insight with his readers before buying himself.  He has an admirable policy of waiting 10 days between publication and trading a stock.  In this case, the stock was trading at $14.57 when he wrote the article, but it closed at $16.37 10 days after publication.  A more recent note from Thomas leads me to believe he is still waiting for HASI to pull back.

Thank you Brad, for finally bringing Hannon Armstrong the attention I have been unable to attract with my many articles about the company since its IPO.  For your sake, and for anyone else who has not yet bought the stock at the very attractive prices we had for the last 20 months, I hope the pullback you’re waiting for materializes.

Last month  the stock of international manufacturer of electrical and fiber optic cable, General Cable Corp. declined 23 percent because of several analyst downgrades and worries about Europe.  A couple more downgrades followed before the company released its fourth quarter earnings and outlook for 2015 on February 4th.  The stock sold off that day, but I felt the discussion of restructuring and outlook were generally positive.  Investors seem to be coming around to my more optimistic point of view, since the company recovered all of its January losses in February with a percentage climb even more spectacular than Hannon Armstrong’s.

Investors and analysts also liked the strong earnings announcement from Canadian yieldco TransAlta Renewables, propelling the stock up another 3.6 percent after strong January gains. Scotiabank, Macquarie, and CIBC all increased their price targets for the stock, with the average price target now C$12.71.

Canadian power producer and developer (yieldco) Capstone Infrastructure lost ground gained in January, and is now down almost 7 percent in U.S. dollar terms, although all of that decline is due to the weakness of the Canadian dollar.  I continue to think that this 9+ percent yield company remains one of the best values among clean energy income stocks: it’s high yield and low price are entirely due worries about a very disappointing decision by the regulator of its British water utility subsidiary.  Capstone is appealing that ruling, but management has stated that the dividend is not at risk even if the appeal fails.  Insiders has put their money where their mouths are by buying the stock on the open market.

In addition to the high yield (which alone seems sufficient reason to own the stock), there is potential for upside if the Bristol Water appeal is successful. Even if this appeal fails, I expect the high yield to cause the stock to appreciate as investors gain confidence that the dividend will not be cut.

Leading North American bus manufacturer New Flyer continues to announce significant new orders of buses, such as 110 compressed natural gas (CNG) buses and options ordered by Nassau county, NY, and smaller orders from Lane Transit in Eugene Oregon and Hamilton, Ontario for up to 20 hybrids and 18 CNG buses, respectively.  These orders follow on the strong backlog of orders I discussed in the last update.

Although a date has not yet been announced, the company should report 2014 fourth quarter and full year results in March.

The stock of bicycle manufacturer Accell Group also advanced strongly in February.  This does not seem to be due to company specific news, but rather to growing interest by institutional investors in the bicycle industry.  It seems that fund managers, especially US fund managers, have become disappointed in the performance of golf companies, and are looking to replace these positions with well known bicycle brands.  Fund managers may be beginning to realize that bikes not no longer just for kids, and are increasingly popular among high income adults.

While it may seem strange that investment managers’ attitude towards golf companies should have any bearing on how they feel about the bicycle companies, this connection is a product of widespread practice of diversifying and portfolios among industries.  While there is probably little economic connection between the economics prospects of Accell and Callway (NYSE:ELY), many fund managers specialize in certain industries.  When such analysts and managers upgrade or buy one stock in their universe, they often will downgrade or sell another stock.  Hence, if a mutual fund manager who specializes in sports equipment sells Callaway, it might not be surprising to see him buy Accell.

Specialty chemicals and biodiesel producer FutureFuel, also recovered (and paid a 6¢ quarterly dividend) in February.  While there has not been significant company news, the EPA has made strong statements about getting “back on track” setting quotas under the Renewable Fuel Standard (RFS.)  The lack of quotas in 2014, and the delay of the 2015 quota are the main reason the stock is currently so cheap.  EPA transportation chief Christopher Grundler recently told a meeting of ethanol producers that the agency would combine three years’ worth of standards — for 2014, 2015 and 2016 — into a single regulatory action. EPA plans to release a proposal this spring and finalize it by the end of November.  The RFS is at least as important to biodiesel producers like FutureFuel as it is for ethanol producers.

Rail and solar investment trust Power REIT reversed some of its January gains.  Investors await a decision (or more likely, non-decision) in the summary judgment stage of its civil case with its lessee Norfolk Southern Corporation (NYSE:NSC) and sub-lessee Wheeling & Lake Erie Railway (WLE).  Unless the court renders a very strong summary judgement, a trial will begin in the next couple months.  I expect few of the outstanding issues to be resolved in summary judgment, so a trial is very likely.

Power RET released a new investor presentation on its website, which includes a management estimate of the net asset value of the company’s assets if they were sold on the open market (page 19.)  Management feels that, even without a win in the civil case, its railroad asset is significantly undervalued compared to NSC’s bonds, which have similar credit and cash flow characteristics.  However, the company has not revealed any plans to sell any of its assets, and would not consider a sale of the railroad asset before the civil case is resolved, even if a buyer could be found.

Energy service contractor Ameresco will release fourth quarter and full year 2014 results before the market opens on March 5th.  Over the last two quarters, the company has spoken of signs that its market for may be recovering from a multi-year slump.  If the trend continues, the stock should reverse its long decline, possibly dramatically.

Vehicle and fleet management software-as-a-service provider MiX Telematics released its third quarter fiscal 2015 results and increased its guidance for the full fiscal year ending March 31st.  I found the outlook and results discussion moderately encouraging, but other investors do not seem to see it that way.  The stock slipped 3.6 percent for the month.

Given the similar size of the two companies’ client bases, one would expect that the two companies would also be valued similarly.  In fact, Fleetmatics’ enterprise value is $1.4 billion (approximately $2,800 per vehicle under subscription in January) compared to MiX’s enterprise value of only $106 million, or $212 per “subscriber” in February.  Based on this metric, the market seems to be undervaluing MiX compared to FLTX by a factor of approximately 8.

I found the January declines of many of the stocks in this list inexplicable, and wrote that the start of February was an excellent time to buy any of them.  The rapid rises in Hannon Armstong, General Cable, and Accell Group show that I was right in at least these three cases.

Several excellent values remain.  Capstone Infrastructure and MiX Telematics look particularly attractive at their current prices.  Ameresco also looks quite attractive, but its near term performance will hinge on the March 5th earnings announcement and management’s outlook for the rest of the year.