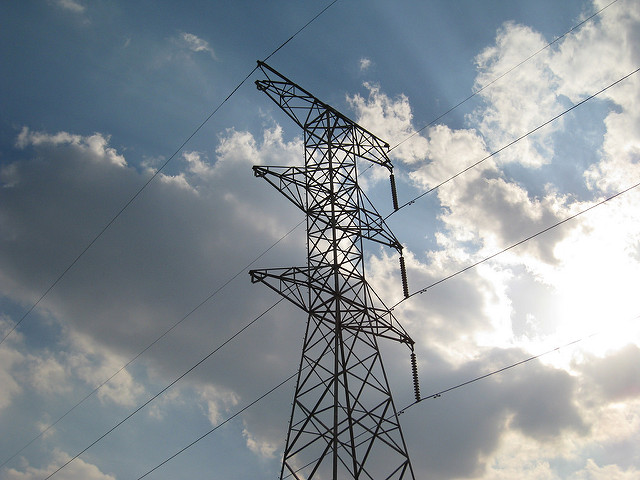 The intermittent nature of renewable generation is one of the largest hurdles impeding the industry’s growth. Though increasingly cost effective, renewables often produce power when consumers don’t need it. While energy storage may be a realistic solution in the future, better grid interconnectivity and efficient cross-country power lines may prove a more immediate solution.

Imagine that electric transmission didn’t lose power over long distances. We could seamlessly transfer power from one side of the continent to the other. Afternoon solar energy in the Southwest could fulfill energy needs at dinner time on the East Coast while evening wind power in the East would fulfill the same need for West Coast diners.  Superconductive lines—or even DC transmission—may prove one way there.

Solar energy produces electricity during the middle of the day, when energy use is relatively flat. It then drops off just as us consumers increase demand between 6 p.m. and 9 p.m. On the other hand, wind generally picks up in the evening. So renewable energy’s timing doesn’t fit commercial needs well, nor those of industrial customers, which need complete consistency throughout all shifts.

Despite a host of caveats to this simplified explanation, the point is that renewables don’t always produce when we need these resources the most. The “duck curve,” pervasive in renewable heavy regions, such as California, shows how solar energy mitigates dependence on conventional energy in the middle of the day. However, the earlier the sun sets, the more likely fossil-fuel resources (usually natural gas) will be called upon to compensate—illustrated below as “increased ramp.” 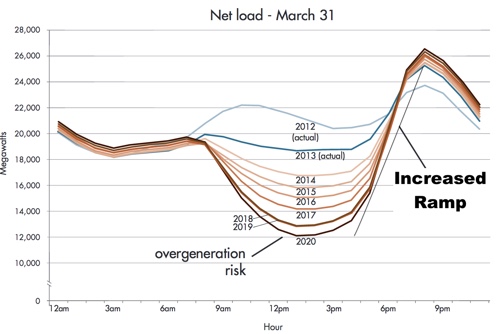 Extremely efficient production of renewables overlaying inflexible base load power during low demand can even result in negative prices. Grid operators are contractually obliged to pay for base load power once it’s running, so most of this generation can’t be taken offline to accommodate upticks in load, forcing supply above demand, and causing prices to drop.

Traditional batteries and pumped hydroelectric storage have been the front-runners in this attempt at temporal arbitrage. However, sand and salt caverns are being tapped while flux capacitors—as imagined in Back to the Future—are being vetted for commercialization among other experimental tools.

As an alternative or a supplement to energy storage, why not take advantage of the four time zones of the Continental U.S. to help align renewable generation with demand?

While a single location has a static renewable energy production profile, connecting the entire country would allow low-cost generation to reach high-cost markets on the opposite end of the country—both tempering price spikes and eliminating negative prices. Peak solar production in the West could serve evening demand three hours ahead on the East Coast. Meanwhile, early evening wind energy produced on the East Coast could serve peak evening demand three hours behind on the West Coast.

There is some precedent for such long distance cross-market transmission. In Texas, new Competitive Renewable Energy Zones (CREZ) transmission lines now connect wind resources in West Texas with markets to the East in Houston, Austin and Dallas. On a grander scale, the Bureau of Land Management and the Department of Energy released a long awaited West-wide Energy Corridor study this May, signaling potential first steps towards connecting disparate generation to load centers in Western states. However, current transmission lines, largely made of aluminum, lose energy over long distances because of imperfect conductivity, or resistance, on the line.

These obscure materials are known as high-temperature superconductors—though high temperature is a relative term in physics. In 1986, an IBM physicist found that cuprate-perovskite ceramic materials reach a critical point at -183 degrees Celsius. This was the first material identified as superconductive above the very convenient temperature of liquid nitrogen, a relatively cheap and abundant coolant. Consequently, these physicists were able to create stable materials with near-perfect electric conductors. 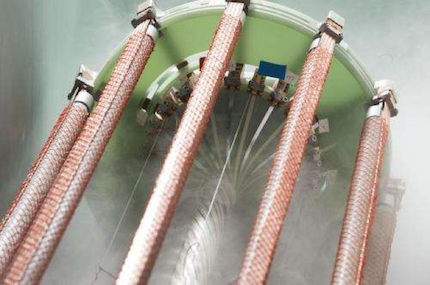 Superconductive lines do still lose a small amount of electricity. Curiously, that loss is largely independent of load on the line, unlike conventional counterparts, which means the more voltage the merrier. The more important inefficiency is that the lines still need to be kept at almost two hundred degrees below zero Celsius. Cooling thousands of miles with liquid nitrogen across plains, mountains and deserts is no small task. 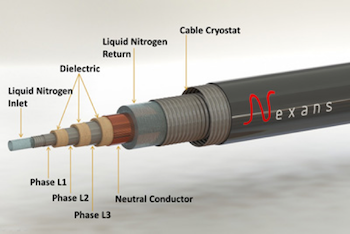 Something similar can be done with DC transmission lines, which have lower line losses over great distances. However, the conversion equipment from AC to DC or vice versa is expensive — though cross-country electricity transmission would have one source (or generation) and one sink (load center), so only convertors at the beginning and the end are needed. There are dozens of major commercial applications for this technology, including across Eastern North America and in California.

Either superconductive or DC lines would occupy much less space, and could largely be strung along the same rights of ways as existing transmission. However, the complicated division and inconsistent market rules of interstate grid operators present perhaps a greater hurdle. The U.S. is covered with a patchwork of large, stateless regional transmission organizations (RTO), independent system operators (ISO), and traditional state-based jurisdictions. The seams between these markets—the series of interconnections between them—are anything but fluid.

Investments in transmission infrastructure crossing from one market to another is complicated and largely unprecedented. The CREZ line in Texas was built within one RTO-like entity, Texas’s ERCOT. However, getting investments from shareholders and buy-in from ratepayers for a multitude of generation companies across RTOs would require serious political capital.

The fact remains that renewable output and consumer demand need to be aligned with greater economic efficiency. That link can be made over time through energy storage, or over physical distances via superconductive lines or DC transmission. Whatever technologies are ultimately deemed most effective by market dynamics and regulatory facilitation, there is a sincere need to bridge this gap between energy supply and demand. The quicker and more efficiently that gap can be filled, the more feasible mass renewable energy becomes.

The opinions and views offered here are those of the author and not those of the United States, the Federal Energy Regulatory Commission, individual Commissioners or members of the Commission staff.