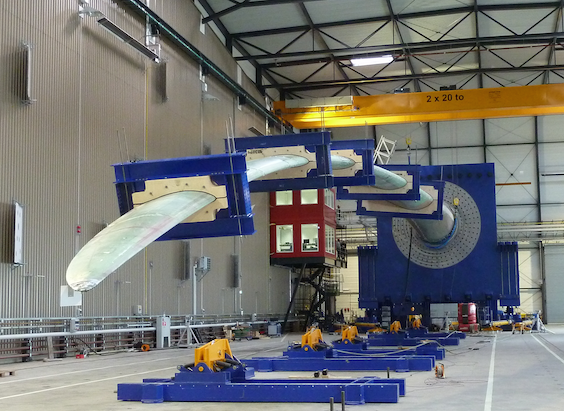 The lengthening of rotor blades is often taken as emblematic of wind turbine evolution, and maturation of the industry as a whole. It’s a sign of not only technological development, but also a reflection of the drivers to continually innovate and deliver more efficient turbines.

At the heart of blade innovation is testing. A juncture between design and commercialization, blade testing is necessary to develop novel concepts, assure manufacturers that designs meet specification, and ultimately gain certification for market entry.

With wind power RD&D as intense and competitive as it now stands, there’s cause for faster validation and certification of designs. As Florian Sayer, head of department division structural components at Fraunhofer Institute for Wind Energy System Technology (IWES), said, “The industry requires new, more sophisticated, more efficient approaches to testing and certification to assure the pace of innovation.” Sayer’s company, IWES, is a German applied sciences institute at the forefront of blade testing, and in describing his perspective on innovation in blade testing, highlights the importance of “looking towards the trends in blade design and developing future test concepts accordingly.”

“Without a doubt longer blade lengths is driving our approach to testing protocols,” he said. Indeed, IWES has a strong track record of keeping pace with blade evolution: in 2009 IWES opened a test facility for blades up to 70m; in 2011 a second test hall for blades up to 90m. With their latest plans, they intend to introduce capabilities at Bremerhaven for testing blades of 100m or more in length. 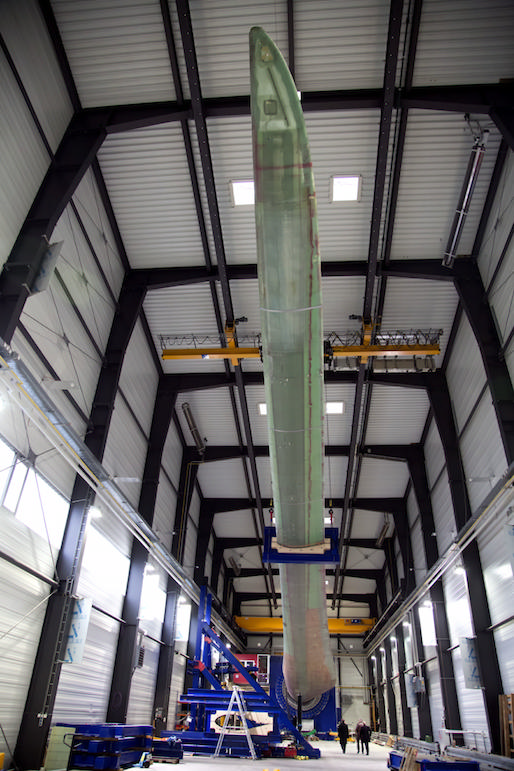 Compounding pressures to advance testing methods are longer blades. In dealing with them, certification providers like DNV GL Energy and IWES are encountering significant challenges that necessitate yet more sophisticated methods for testing. In particular, fatigue testing of whole blades can become an exceedingly time-consuming, arguably inefficient, exercise.

Fatigue testing involves testing a blade’s resilience to material stresses anticipated over its 20-year lifespan. Testing involves using hydraulic cylinders to push and pull the blade through large deflections — creating oscillations at the blade’s natural frequencies. The process is undertaken with the blade in both a vertical and horizontal position to test lead-lag and flapwise fatigue.

By subjecting the blade up to 5 million cycles in each direction, 20 years’ worth of fatigue can be condensed down to just several months. It’s a massive simplification of real-life loads, but it represents a compromise between time, costing, and pragmatism.

In this context, a core problem stems from physics of longer blades, as Pansart explained: “In longer, heavier blades the natural frequency of the blade decreases. Therefore, to reproduce a number of load cycles takes longer. There are also greater demands on the test rig itself. Both aspects require innovation and can add months to testing time.”

Describing the same issue of testing at low frequencies, Sayer detailed how longer test durations “add expense to certification,” which is increasingly costly as lengths increase: “we assume a 100m blade, tested on current procedures, would require around 12 to 18 months, depending on the actual test program.”

Sayer concluded, “Altogether there are significant shortcomings in current testing approaches that emerge with longer blades. It’s not a good situation; especially when this is all conducted over only two directions since there are additional [real-world] loading situations that aren’t considered, or validated against.”

In response to these circumstances IWES recently announced a five-year project to develop novel blade testing methods. For Sayer, the project has been fostered through perspectives of OEMs: “We have a steering group featuring all major German blade manufacturers. Our discussions on blade reliability, certification, and testing issues guide our development. The whole [research] concept is driven by their needs.”

A solution now under development at IWES involves substructure testing — where smaller sections of blade are tested in place of whole blades. Benefits of substructure testing become evident in fatigue testing. “Natural frequencies drastically increase with shorter blade segments, so by cutting the blade around the middle, we can test two segments at higher natural frequencies, meaning fatigue cycling is considerably shorter in duration,” Sayer said.

Sayer believes substructure testing could facilitate enhanced profiling of multiple components, not just a tip and root segment: “test blade sections could be a cut-through the blade, a spar-cap with a piece of the web, a trailing or leading edge piece, a piece of spar cap, or it could be a 6m outboard section of the blade featuring the whole cross section.”

“In all instances, we’ll gain a better representation of the load profile, more comprehensive understanding of blade performance, and characterization of their tolerances,” he said.

Substructure testing of this sort holds great promise to provide more cost-effective testing than compared with complete blade testing, but crucially it’ll be much faster — “we believe a test time reduction of 30 percent is attainable,.” In turn, he said, “this means we then have more time to perform other tests, for instance off-axis direction tests.”

To facilitate substructure testing, the IWES project involves development of entirely new test infrastructure for sub-component tests— planned for mid-2018. Sayer explained that although final specification of the new rig is under development, “it’s likely to be a ‘hexapod’ design, which will apply torsion forces and bending moments in parallel.”

Consequently, DNV GL Energy is leading the charge in advocation for substructure testing; in December 2015 the company published proposals for new certification standards which, as Pansart said, “incorporates these [substructure] innovations into certification requirements. What we’re proposing is to make subcomponent testing a larger part of the certification process. This might include replacing certain aspects of full-scale blade testing with substructure testing.”

As Pansart described it, the development would be a significant one — representing a large departure from precedent: “We have a situation today with the IEC setup, which is rather strict — requiring full-scale tests in all cases.” Nevertheless, he believes that “in time, with enough evidence, substructure testing will become more and more reliable to replace certain aspects of full scale blade tests.”

Pansart cautioned, however, that “this doesn’t mean that in the near future we can go without full-scale testing entirely — that’s not reasonable.” In Pansart’s view, full blade tests will still have a role to play in verification of designs, but it may well be a reduced role. For instance, certification of a wholly new blade design may require a full blade test; but subsequent iterations, or blade variants, may then be certified through substructure testing, thereby avoiding excess testing.

The substructure test methodologies IWES and DNV GL Energy are developing amount to more than a means to an end for certification however. Exploring substructure testing, amongst other novel approaches, constitutes an area of fundamental research Sayer described as one “that will help the industry understand their specific blade details much better, validate design models and assumptions far better and optimize them further — either increasing reliability, or reducing materials and reducing costs.” Something that, “in the longer term, such research will be driving future blade design.”

A similar view is held by Pansart, who noted that DNV GL Energy’s new certification standard “contained clauses which would make it possible for a blade designer to ask for applying somewhat lower safety factors in view of more advanced testing they’ve performed. The closer your testing comes to real-world conditions (loading and so forth), then lower safety factors may be allowed.”

The notion of reduced safety margins spells good things for blade engineers, and would likely lead to their being able to design more efficient blades, less constrained by regulations requiring additional load bearing material and structuring to account for uncertainties.

The full extent of what substructure testing will mean for improving certification processes, and for the design of future blades, remains to be seen. Nevertheless, for now there’s certainly grounds for having confidence in the view that innovations driving lowering the costs of wind power aren’t constrained to the final size of a wind turbine, but extend to the research and testing that paves the way for tomorrow’s designs.