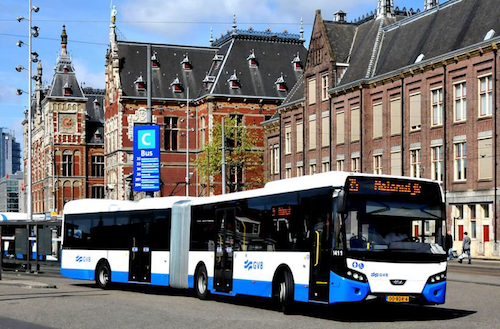 Amsterdam, The Netherlands — How did Amsterdam create its ambitious climate and clean energy programs, long before most other major cities?

As early as 2006, the city contemplated setting up a municipal agency called the Amsterdam Climate Office and embarked on a series of intensive studies of climate and energy. The city also committed itself to cutting its greenhouse gas emissions 40 percent by 2025 relative to 1990 levels.

Soon after, the city recognized that broad consensus would be needed to mount an effective response to climate change. It began developing a framework for civic collaboration and cooperation by reaching out to businesses, institutions, and citizens organizations, and by convening a climate conference in 2007.

These efforts resulted in a formal framework of cooperation known as New Amsterdam Climate. The city’s in-depth climate and energy studies then culminated in a major strategic planning document called, Amsterdam: A Different Energy: 2040 Energy Strategy.

Over the next four years, the city council and vice-mayors led the city in creating and implementing the report’s clean energy strategy. Goals were developed for energy efficiency, as well as for the production of solar and wind power and for the substitution of electricity for fossil fuels in the transportation section.

Peter Paul Ekker, spokesman for Amsterdam Alderman Abdeluheb Choho, vice mayor for sustainability, believes Amsterdam’s ambitious sustainability programs arose partly because “there’s a lot of creativity and entrepreneurship” in Amsterdam and partly because the city has universities, a high-tech community, and “people with bright ideas.”

“If you come with a new idea” in Amsterdam, Ekker said, “everybody is open to it. This is also why the city council has quite unanimously supported working on climate change and climate mitigation.”

Ekker explained that climate mitigation enjoys strong public support in Amsterdam because the municipality rallies support for it by underscoring the economic and public health benefits of what it calls, “sustainability measures.”  It doesn’t try to mobilize the public through fear or by winning fractious debates about the future impacts of climate change.

“Our analysis is that the public in general doesn’t need convincing on the need for mitigation measures, but it does need examples and solutions on how to become a sustainable economy,” Ekker said.

The city therefore talks about what is technologically possible and cost-effective along with the co-benefits of sound climate policies, like cleaner air, fewer respiratory problems, and a more livable environment.

For example, the city’s policies on electric vehicles (EVs) are not “climate change-driven,” Ekker said. Support for them is based on concerns about public health, but the net effect benefits the climate, too. 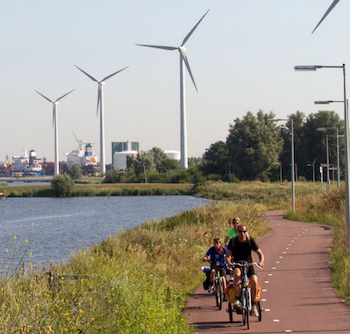 Moving away from fossil fuels also has real economic benefits, and “we are not afraid to celebrate that,” Ekker noted. These benefits include attracting large companies to Amsterdam. Tesla’s European headquarters are now in the city, which Ekker attributes in part to the fact that, “we are frontrunners in electric cars and electric transport.”

Carrots and Sticks: Subsidies and Regulation

Amsterdam is discouraging the use of inefficient fossil fuel vehicles by establishing restricted “environmental zones” from which older, less efficient vehicles are barred. The dirtiest vehicles will soon not be granted city parking permits at all and “in the future will not even be allowed to enter the city anymore,” Ekker said.

“Public transport is going to be totally electric by 2025,” Ekker declared. Some businesses have already opted to have their delivery trucks drive to the edge of the city using fossil fuels and then transfer to an EV because it’s cheaper to enter the city in an EV. This, Ekker believes, could be a model for other cities.

Currently the city is also changing from diesel to electric buses and by 2025, all the city’s taxis will have to be electric. Ultimately, all Amsterdam’s public transport will be emission-free.

Rather than arguing about the severity of climate impacts, Amsterdam leaders chose to spotlight the opportunities that ambitious solutions offer and successfully built a public consensus favoring clean energy. “We are really focused on solutions,” Ekker said, “because that’s where we can make an impact.”