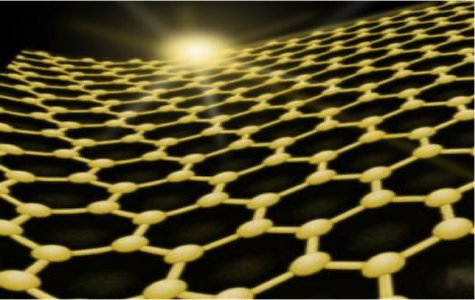 Graphene is a nanomaterial that has been attracting a remarkable amount of interest as a potential game changer for various applications, from energy storage to flexible transparent displays. Graphene is basically a honeycomb-patterned sheet of carbon atoms. It is only as thick as one carbon atom — making it a two-dimensional material — that still manages to be 200 times stronger than steel. It is also almost entirely transparent and an excellent conductor of heat and electricity that is quite impermeable and flexible.

Significant research is done towards utilizing graphene’s unique characteristics for use in solar cells. As solar cells require materials that are conductive and allow light to get through, it’s highly possible that graphene’s superb conductivity and transparency might help create the next generation of more efficient, durable and low-cost photovoltaics. Graphene is indeed a great conductor, but it excels less when it comes to collecting the electrical current produced within the solar cell. This is why researchers are looking for appropriate ways to modify graphene for this purpose, experimenting with graphene derivatives and modifications like graphene oxide (GO), for example, that may be less conductive but more transparent and a better charge collector.

Another possible use for graphene is replacing ITO in solar cells. The conductive Indium Tin Oxide (ITO) is used with a non-conductive glass layer as the transparent electrodes in most organic solar panels, but the material is rare, expensive and brittle. Many researches focus on graphene as a potential replacement for ITO in transparent electrodes of OPVs, while others search for ways of using graphene in improving overall performance of photovoltaic devices, mainly OPVs, as well as in electrodes, active layers, interfacial layers and electron acceptors.

Researchers from MIT are working towards developing a new solar cell, made from graphene and molybdenum disulfide, which will be thin, light and efficient — up to a 1,000 times more than silicon panels. It is hoped to achieve the “ultimate power conversion possible” due to its unique structure. Researchers from the same university also developed a flexible transparent graphene-based electrode for graphene polymer solar cell, which they claim is the most efficient electrode of this nature ever developed.

Researchers from the University of Cincinnati demonstrated that adding even a small amount of graphene flakes to a polymer solar cell can improve the performance of the cell by as much as three times the conventional non-graphene type. Researchers from Singapore’s A*STAR institute discovered that graphene outperforms ITO as solar panels transparent electrodes, when stacking four graphene sheets.

The Canadian Sunvault recently formed the Supervault Energy JV to develop graphene supercapacitor technology for solar cells. The company referred to this as a technology that will “change the face of renewable energy generation and storage.”

This project aims to explore the possibility of incorporating graphene nanoplatelets (GNPs) within the perovskite charge collecting regions of solid-state dye-sensitised solar cells so that efficiency levels can be boosted. The option of monolayer graphene encapsulation of the entire cell can also prevent moisture from entering, which will increase the durability in addition to reducing the external toxicity of solar cells based on these materials.