California, United States [RenewableEnergyWorld.com] Despite their widespread use, solar technologies suffer the limitation of most renewable technologies: an unpredictable operating profile due to weather variations. However, using the highly efficient properties of molten salt for heat transfer, one technology insulates electricity production from weather volatility and, more importantly, it offers the capability to dispatch electricity as needed without requiring the use of natural gas. This technology is a concentrating solar power (CSP) technology, built around a proprietary central receiver tower and molten salt loop.

Thermal storage is widely regarded as the future for the renewable energy campaign because, unlike many intermittent renewable resources such as wind energy, it offers a “zero-emissions” technology with firm capacity and dispatchability characteristics. The thermal storage system provides an added benefit: allowing the plant to be designed to optimize the electricity load profile to meet specific market needs. A plant can be designed, for instance, to maximize electricity production during a period of peak demand or to continue to produce electricity after the sun goes down. 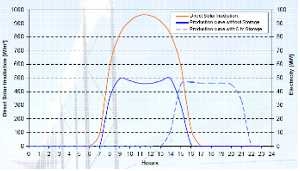 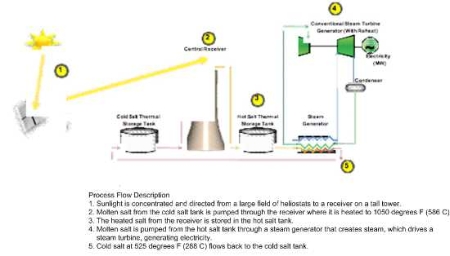 As shown in Figure 2 (above), a field of sun tracking mirrors called heliostats is used to reflect and concentrate the solar radiation onto the receiver (Step 1). At Solar Reserve’s Solar Two facility, molten salt is circulated through tubes in the receiver, collecting the energy gathered from the sun (Step 2). The hot molten salt is then routed to an insulated hot thermal storage tank where the energy can be stored with minimal energy losses (Step 3). When electricity is to be generated, the hot molten salt is routed to a heat exchanger (or steam generator) and used to produce steam at high temperature and pressure. The steam is then used to power a conventional steam turbine, generating electricity (Step 4). After exiting the steam generator, the molten salt is sent to the cold salt thermal storage tank (Step 5) and the cycle is repeated.

The salt is a combination of sodium and potassium nitrate, with a melting temperature of 460°F. In the liquid state, molten salt has the viscosity and the appearance similar to water. “In solar applications, molten salt is used for a number of practical reasons,” says Terry Murphy, Chief Executive Officer for SolarReserve, who along with others helped develop the molten salt technology at Rocketdyne. “Molten salt is a heat storage medium that retains thermal energy very effectively over time and operates at temperatures greater than 1000°F, which matches well with the most efficient steam turbines. Second, it remains in a liquid state throughout the plant’s operating regime, which will improve long-term reliability and reduce O&M costs. And third, it’s totally ‘green,’ molten salt is a non-toxic, readily available material, similar to commercial fertilizers.”

A primary advantage of molten salt central receiver technology is that the molten salt can be heated to 1050°F, which allows high energy steam to be generated at utility-standard temperatures (1650 psi minimum, 1025°F), achieving high thermodynamic cycle efficiencies of approximately 40 percent in modern steam turbine systems. This high cycle efficiency is maintained while allowing the use of dry cooling towers, which is important in arid states with the best solar potential. The molten salt heat transfer loop through the receiver is isolated from main steam temperatures and pressures, resulting in cost savings through the use of low-pressure salt piping. Finally, the system is designed to minimize the length of the molten salt loop to less than 2,500 feet, which is heat traced to prevent ‘freezing.’

Thermal storage systems using molten salt have been identified for use with other solar technologies, such as parabolic trough systems, which have been the dominant solar thermal technology installed to date. Trough plants will require an additional heat exchanger to transfer the energy from the working fluid to storage and to transfer the energy in storage back to the steam system. It is estimated that the additional heat exchanger required for a trough plant causes a loss in cycle efficiency loss of up to 7 percent. In addition, a trough facility that can only achieve a hot working fluid temperature of 700°F will require approximately 3 times the thermal storage volume to generate a given amount of electricity as an integrated thermal storage system which stores energy at 1050°F.

The high cycle efficiencies and flexibility available with a central receiver system and integral thermal storage provides a compelling offering to the renewable energy purchasers.

Julie Way is director of development at SolarReserve.

This story was originally published in Power Engineering International and was reprinted with permission.