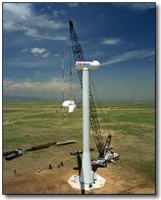 An innovative and rare energy facility is being contemplated by the Iowa Association of Municipal Utilities (AMU). The proposal is known as the Iowa Stored Energy Plant and its centerpiece is a compressed air energy storage (CAES) system incorporating a number of technologies including wind power.

Ankeny, Iowa – June 13, 2003 [SolarAccess.com] CAES is a technology to store energy in the form of compressed air in an underground facility for use in later generation. CAES is already in use in two other locations and is a well-known and cost-effective generation technology. The Iowa Stored Energy Plant project proposes two innovations to the CAES concept: First, the compressed air will be stored in an underground aquifer, rather than in a cavern as in other CAES projects. Second, wind energy will be used to compress air, in addition to the off-peak power used elsewhere. When generation is needed, the compressed air is released to drive natural gas-fired combustion turbines. The compressed air replaces two thirds of the natural gas normally used in a turbine. A separate section of the underground aquifer will also be used for storing natural gas. Gas storage will allow the facility and other gas utilities to buy natural gas when prices are lower. Preliminary cost estimates show that a configuration of 200 MW of CAES generation capacity with a 100 MW wind farm, is the most economical. Although wind energy is the lowest-cost new generation option available, it is not reliable by itself, according to the AMU. CAES provides a battery for wind energy and makes it a dispatchable electrical resource. While the Iowa Stored Energy Plant incorporates wind directly into its design, it will also indirectly promote the use of wind energy in the region. CAES will be operated to follow loads and fill in where other generation is unavailable or uneconomical. Wind generation output is highly variable, but CAES can fill in the gaps for wind. This could expand the role of wind in the region’s generation mix. The combination of natural gas and wind for electric generation lowers carbon emissions significantly and uses the abundant Iowa wind resource. In the future, a carbon neutral power plant, replacing natural gas with shelled corn, another important Iowa resource, can be envisioned. Although sites in other states are being explored for CAES, Iowa is in the forefront of stored energy development, according to the Association. First, Iowa possesses a site that is ideal for the CAES power plant and wind farm. An underground aquifer near Fort Dodge contains the dome structure, capacity, and porosity needed for storage of both compressed air and natural gas. Second, Iowa has vast wind resources and corn acres. Income from leases of underground aquifer storage rights and for placement of wind turbines would give local landowners an ongoing revenue stream. At a US$215 million construction cost, the Iowa Stored Energy Plant would provide an economic benefit not only for the Fort Dodge area, but for the entire state of Iowa. The AMU cite a number of reasons why this non-traditional approach should be explored for the state. Among these are a continued growth in electrical demand, projected deficits in electrical capacity, an aging generation mix, the need for additional Renewable Energy, the potential for carbon emissions to become more costly and both increasing and volatile natural gas prices. The website listed at the link below will be updated on any progress with this project.