It is not accurate to say that wind and solar energies are intermittent and the scientists and engineers who are studying, developing and managing them have been working hard to change the description to the more accurate term of “variable.”

Variable is not the same as intermittent. Many people find their loved ones to be variable but the lucky ones also find them reliably constant and not intermittent. The challenge is to handle and depend on the variability. Without their variability, they would not be the ones we love.

Fossil fuels are not variable. They can be reliably be counted on to constantly generate energy and pollution in large quantities. Because of that, the New Energies’ scientists, engineers and developers are aggressively pursuing affordable, utility-scale electricity storage, the solution that would most obviously eliminate the variability of wind and solar and do away with concerns about their dependability. It turns out, though, that it is also possible to accept variability as an essential part of the nature of wind and sun and develop ways to successfully live with it.

The Role of Energy Storage with Renewable Electricity Generation, from Paul Denholm, Erik Ela, Brendan Kirby, and Michael Milligan of the National Renewable Energy Laboratory, says the issue of electricity storage is not a need but a want, something that is a matter of cost. Variable New Energy generation (VG) has technical and economic impacts but managing it successfully can make it dependable. This can be done with enabling technologies and grid operation practices, including most prominently (1) demand response, (2) increased transmission capacity, (3) flexible generation, and (4) improved operations.

The first and most important thing to understand about variability is that grid operators already cope with it on a daily basis. Demand varies constantly, by the hour of the day, by the day of the week and by the season of the year. Grid operators regularly manage a set of generation sources and ramp supplies up and down to match demand. Integrating New Energy sources is, in some ways, more of the same. ::continue:: 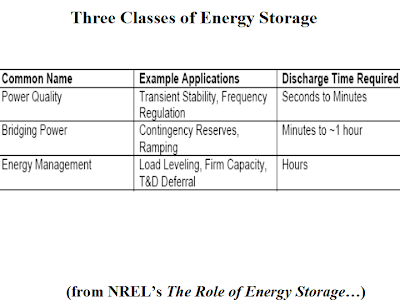 Though some grid operators may nostalgically, if unrealistically, long for a simple yesteryear when coal was burned and electricity sent, variable New Energy generation can be equally serviceable, if not 100% dispatchable, by integrating it into a transmission system that can smartly process and dispatch electricity from a wide range of sources.

The are 2 real questions about energy storage. First, how much will it cost and is it worth the cost in comparison to the value from (1) building a smarter grid with more demand response capacity, (2) building more high capacity transmission to expand the range of available sources and load centers serviced, or (3) developing operational practices that allow for more effective variable New Energy integration into the existing grid? And second, what is the full potential of VG and how much can be used by a high capacity smart “future grid” before it becomes necessary to invest in energy storage or limit New Energy generation?

It is also worth remembering that the Old Energies have reliability issues as well. Nuclear energy is considered by some to be a preferable emissions-free source of electricity generation because it does not vary as often as solar and wind. Coal is considered preferable because it is cheap and certain.

But the variations in sun and wind are entirely predictable and can be compensated for with a flexible grid and distributed sources. When a nuclear plant crashes there is no warning. Coal plants, dependent on an antiquated transmission system, can be completely out of business in an unpredictable instant from the loss of a single line. When such events have happened, cities, parts of states, even interstate grid systems have been left in the dark for hours or even days.

Predictable, variable New Energy generation can be managed by a flexible transmission system and grid operator and, perhaps eventually, energy storage. That has costs. The unpredictable variation of the Old Energies cannot be managed and must be endured. That has enormous costs. 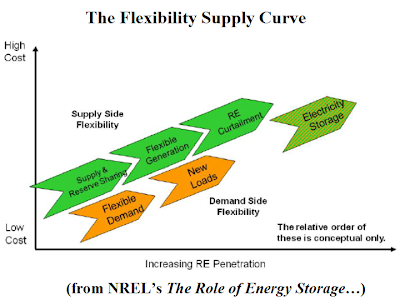 This post is based on The Role of Energy Storage with Renewable Electricity Generation by Paul Denholm, Erik Ela, Brendan Kirby, and Michael Milligan (January 2010, National Renewable Energy Laboratory)