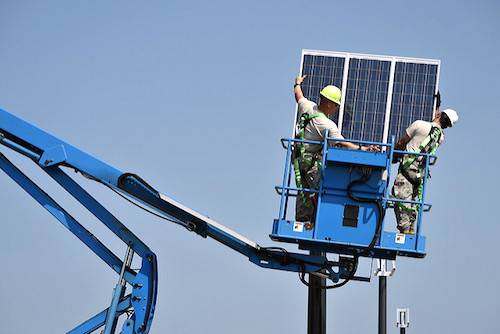 New York and Massachusetts this week took steps to aggressively push for more renewable energy in their power portfolios.

The New York State Public Service Commission (PSC) approved a mandate issued last fall by Gov. Andrew Cuomo that New York supply 50 percent of its electricity from renewable energy sources by 2030. In Massachusetts, the state legislature passed a measure that, if signed by Gov. Charlie Baker, would require the state’s utilities to obtain a total of 1,600 MW of power from offshore wind farms. The bill also includes an increase in mandates for other clean energy resources, including hydropower.

According to a statement from Cuomo’s office, the initial phase of New York’s new Clean Energy Standard (CES) will require utilities and other energy suppliers to procure and phase in new renewable power resources starting with 26.31 percent of the state’s total electricity load in 2017 and grow to 30.54 percent of the statewide total in 2021.

PSC Chair Audrey Zibelman said in a statement that the new CES is a “crucial addition” to the PSC’s actions under the New York Reforming the Energy Vision – a state effort to modernize the state’s power system.

The CES will be enforced by requiring utilities and other energy suppliers to obtain a targeted number of renewable energy credits each year.

Sean Garren, Northeast regional manager at renewable energy policy advocate Vote Solar applauded the PSC’s decision. Garren said in a statement that Vote Solar “shares the governor’s vision of a modern energy system that prioritizes clean energy sources and gives all New Yorkers the opportunity to participate in and benefit from [the state’s] clean energy economy.”

According to the governor’s office, the PSC will work with the New York State Energy Research and Development Authority (NYSERDA) and stakeholders to develop the content and standards that could be used to create a New York-certified clean electric product. The product would be labeled and identified as New York-based clean power giving consumers the ability to buy 100 percent clean power.

The PSC’s decision directs NYSERDA to develop a blueprint to advance offshore wind energy, a report the governor’s office said is already in progress. In addition, PSC staff will work with the New York Independent System Operator and other stakeholders to ensure that necessary investments are made in storage, transmission and other technologies to secure a reliable electric system.

Emma Fazio, an attorney in the Energy Development Group at Stoel Rives, said in a research note that the CES includes a plan to support the three nuclear power plants in the state, which have been hit hard by low natural gas prices. The plants would receive $965 million over the first two years of the CES, using a formula that accounts for expected power costs and the federal social cost of carbon, she said.

Exelon has announced that it will invest about $200 million in two nuclear plants and possibly purchase a third as a result of the decision.

According to Fazio, there is some concern that the subsidy for nuclear plants could go against the U.S. Supreme Court’s ruling in Hughes v. Talen Energy Marketing, which prohibited ratepayer subsidization of in-state power plants that couldn’t compete on the wholesale market.

“New York is bucking the trend away from nuclear that is playing out in other states,” Facio said. “California’s last nuclear plant will close when its licenses expire in 2025, and Massachusetts just passed a bill that aims to replace nuclear with renewables. And in Illinois, two plants are set to close after the failure of legislative efforts to bail out the plants.”

The comprehensive energy bill adopted this week by the Massachusetts legislature includes a provision requiring the state’s utilities to enter into long-term contracts to purchase both offshore wind and hydropower by 2027. In addition to the 1,600 MW mandate for offshore wind, utilities would have to purchase an additional 9.45 million MWh of power annually from new Class I resources and hydropower.

“This bill will allow the creation of a viable offshore wind energy industry here in Massachusetts,” he said.

According to DONG, the legislation is the first of its kind to include a specific carve out for offshore wind at scale.

Andrew Gohn, Eastern Region Policy Director for the American Wind Energy Association (AWEA) in a statement thanked Sen. Ben Downing, and House Telecommunications, Utilities and Energy Chairman, Thomas Golden for championing the bill, and Gov. Baker for his leadership in the effort.

“We encourage the Governor to sign it into law without delay,” Gohn said.

AWEA said that offshore wind projects solicited under the new requirement have a minimum size of 400 MW, which is twice the capacity of the average land-based wind farm installed in the U.S. last year.