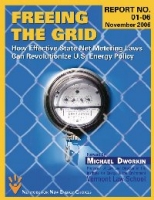 The report from NNEC identifies how state net-metering programs — which are designed to help homeowners and small businesses generate their own renewable energy and sell the excess back to the central transmission grid — hold the key to solving America’s energy challenges by comparing the regulations from 34 states. Chris Cooper, Executive Director of the NNEC, explains that when Congress mandated in the 2005 Energy Bill that every state consider adopting or expanding net metering programs by the end of 2007, some states were more effective than others. “In many states, on-site renewable electricity already can compete successfully with energy from dirty, centralized power plants,” said Cooper. “But, in many states, complex rules are designed to protect electricity monopolies and discourage homeowners and small businesses from generating their own clean energy.” “Utilities should not have a divine right to charge for electricity that customers can otherwise generate more efficiently and more cleanly on their own,” Cooper said. “…Americans are willing to invest in their own energy independence if regulations would only let them.” For a transcript of the talk that took place November 16 at the National Press Club in Washington, DC, contact the Network for New Energy Choices. Panelists included Chris Cooper, Executive Director, Network for New Energy Choices; Michael Dworkin, former Chair, Vermont Public Service Board; Representative James Covey (D-OK), Vice-Chair, Environment & Natural Resources Committee; and Gordian Raacke, Executive Director, Renewable Energy Long Island.