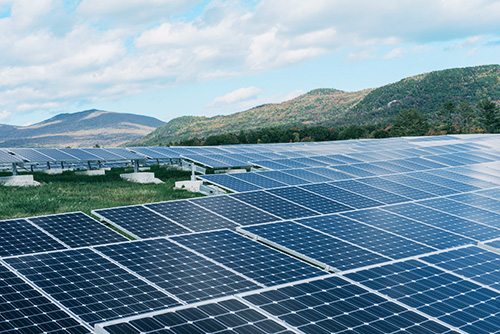 On Tuesday morning, Standard Solar announced that it is being acquired by Gaz Metro, a Canadian diversified energy company that also owns Green Mountain Power (GMP) – the distribution utility for the majority of Vermont.

Together the companies will now be able to offer stable financing for the commercial and industrial solar sector, one that Scott Wiater, CEO of Standard Solar views as the next hot solar market.

“Having a Canadian company invest in a U.S. company [that is active] in a certain market segment is going to send signals that — and it’s been talked about quite a bit — the non-residential DG space is the next hot space for the market,” he said in an interview.

Access to efficient finance will help the market quite a bit, according to Wiater and with the Gaz Metro balance sheet behind it, Standard Solar is ready to grow the commercial market significantly – not just by building its own projects but also by helping finance other projects that are struggling to get financing.

“We have been through the tough times and know how the financing partners don’t always act as a partner,” said Wiater, adding, “we are going to change that dynamic and help companies, verses hinder companies, get their projects across the finish line.”

Martin Imbleau, Senior Vice President Operations, Transport and Development of New Energies at Gaz Métro said his company was looking to further diversify and grow its presence in the U.S. market. The company is active in electric distribution and production including solar and wind power, and natural gas distribution, LNG and renewable natural gas. It currently has more than US $5.8B in assets.

Imbleau said that distributed solar is a new line of business for Gaz Metro but “it is a good addition to our portfolio [because it adds] a new energy source to our existing territory.”

Earlier in 2016, GMP announced that it was going to start helping customers go off grid if they so desired, marking a stark departure from the net-metering battles taking place across the country, with many utilities questioning the value of solar. Wiater views having the same parent company as an innovative utility such as GMP offering great benefits for Standard Solar.

“One of the fringe benefits that we are excited about is we’ll have that information sharing between us and a regulated utility,” he said. “We are looking forward to having those discussions on how do we deploy more DG solar and have a positive impact to the distribution utility verses just trying to go head to head and fight those,” he added.

The transaction is expected to close in the coming weeks. The company will continue to operate as Standard Solar, maintain its Rockville, Md., headquarters and be managed by its current executive team.