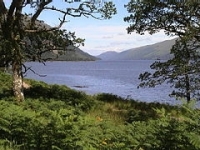 The US$1.26 billion project is being developed by Scottish and Southern Energy Renewables (SSE) and will be located above Loch Lochy in the Great Glen, should it be approved by the Scottish Ministers.

However, SSE says the unanimous support of the Highland Council — which acts as the local authority — is an important component in the final decision.

“A project of this scale would bring significant positive benefits to the communities which surround it, and we are committed to maximizing theses benefits to the local communities, businesses and suppliers should the scheme be consented by Ministers,” says SSE Director of Onshore Renewables Colin Nicol.

The Choire Ghlais (also called Coire Glas) project has been questioned by residents living near the proposed site, whose primary concern seems to be the anticipated increase in traffic associated with the plant’s construction.

“We recognize that there would be short-term disruption during the construction period and we would continue to work actively with the council, public agencies and with local residents to identify the best ways to reduce and manage these short-term impacts,” Nicol says.

HydroWorld.com reported in February that SSE had filed an application with the Scottish government seeking approval for the project, which would be the first new pumped-storage facility to be developed in Great Britain since 1974.