Vantaa, Finland The debate around the use of rare-earth materials has been heating up, especially after China announced its restriction on the export quota of rare earth materials at the end of last year. For companies in the clean energy and high-tech industries, this poses an immediate threat to their global supply chains, as 90% of rare earth materials are currently produced in China. Taking a more holistic perspective, though, rare earths may indeed offer a sustainable future.

Rare earth materials, a group composed of 17 chemical elements, have been used in the manufacturing of products as diverse as flat-screen monitors, medical devices, information and communication equipment, batteries and aerospace alloys, as well as wind turbines. The reason they are considered ‘rare’ is that they are difficult to find in concentrated or easily exploitable forms, not because the elements themselves are uncommon. The rare-earth industry as a whole is currently valued only at about US$2 billion annually, but is nonetheless extremely important to a number of applications.

‘Rare earth’ magnets – made from alloys of rare-earth elements – were originally developed in the 1970s and 1980s and are known to be the strongest form of permanent magnets today. They allow relatively high temperatures and high remanence flux. 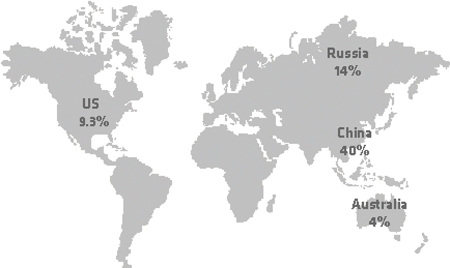 Figure 1. In addition to China, some of the largest reserves can be found in Russia and its surrounding countries with a total of about 14%, the US with approximately 9.3% and Australia with 4%.

The cause for concern is not the fact that rare-earth materials are being used – known reserves of neodymium, one of the main elements in these magnets, are estimated to be around 8 million tonnes. At current consumption rates it should last more than 1000 years, even without recycling. And, only approximately 7000 tonnes are currently being used annually for present applications. Rather, the question is the quantity of rare earths that a particular application requires. Traditional industries, such as disc drives, personal electronic devices and power tools require a few grammes per unit. Lately, many clean-tech applications, including hybrid and electric vehicles, have been rapidly moving into mainstream use. Still these, too, only require rare-earth materials in volumes of kilograms.

In contrast, permanent magnet generator-based (PMG) wind turbines, and in particular direct drive generators, devour a whopping metric tonne per unit – as much as 3000 clean-energy vehicles. And this is where the questions begin.

Although China today has nearly a production monopoly of 97% when it comes to the mining of rare-earth materials, some sources estimate that the country accounts for 35% – 40% of the world’s total rare-earth reserves. According to another source, China’s share of the resource has, in fact, dropped from about 45% to 30% in the past two years alone due to the accelerating demand.

Statistics published in 2008 by the US Bureau of Mines verify that other locations have substantial reserves. Among the largest reserves can be found in Russia and its surrounding countries with a total of about 14%, the US with approximately 9.3% and Australia with 4%, see Figure 1, above. Other countries, such as Canada, South Africa, Vietnam, also have known reserves.

Two of the mines that are due to come back on-stream at peak production capacity already in 2012 are Molycorp’s California-based mine and the Lynas mine in Australia. Other mines that are planning to start up in the near future are located in Canada, South Africa and Kazakhstan. There is no doubt about the potential and availability of rare earth materials outside China. Arnold Magnet Technologies, a British permanent magnet product and assembly manufacturer, conducted a study estimating the power potential in nine mines located in Australia, Canada, South Africa, Greenland and the US. The study concluded that if all available rare earth materials from those mines alone were harnessed, over 16,000 GW of installed power could be produced, equivalent to five and a half million 3 MW medium-speed permanent magnet generators. This is far beyond any national quotas set to date for renewable energy usage.

From the Chinese perspective, the country claims to be worried about the overexpansion of mining activities in several regions of the country and the corresponding environmental damage. Mines rich in rare earths like Bayan Obo in Inner Mongolia has used of 65% of its 43 million tonnes of reserves, according to authorities.

As early as the 1970s, China strongly promoted mining activities for rare earths to boost employment and, at the same time, cut prices. This led to a situation where it was no longer commercially viable for mines outside China to operate. Molycorp’s Mountain Pass mine in California closed in 2002 due to financial pressure.

In 2007, it was already feared that consumption would exceed the annual production rates by 2009-2010 – due to all the new emerging green applications. This was also reflected in the price development of Nd, Dy, Pr and other rare-earth metals used in magnets.

Luckily, this shortage of rare earths did not materialise. Price levels have remained conservative and stable for most of the past decade. In this respect, the production cutbacks due to the global recession have been helpful. However, during 2010, with additional taxation, prices have rapidly risen beyond reasonable expectations.

Only recently have western companies and investors understood the importance of rare-earth based minerals and metals, and even several new ores have been identified. The development of alternative sources will, of course, take several years, since the entire supply chain from mining operations to refining capacity needs to be built up from scratch.

However, the aim is to have increasing amounts of rare-earth materials coming from non-Chinese sources. Additionally, these new sources will help to stabilise the situation so that no shortage of these materials will occur. Plans even call for the restart of NdFeB magnet production in the US, solely produced with US-sourced rare-earth raw materials. There’s no question that the developments of the past 10 years has resulted in an unhealthily skewed phenomenon in which all mining and refining of rare earths have been concentrated in almost one single-source country, China.

Experts from China, including Peking University Professor Xu Guangxian – widely considered China’s ‘Father of Rare Earths’ – feel it is unfair to pressure China to supply rare earths for the entire world. In the race for profit in the 1990s, more than 100 refineries sprang up in China, including ones that were operated illegally. This has led to excessive mining and extremely low prices, especially during the years when supply far exceeded demand.

Today, the opposite is true. China put limits on its annual total volumes of rare earth production in early March 2010, representing a drop of 40% compared with the production volumes a year earlier. And in October 2010, China announced that it would be decreasing its exports of rare-earth materials by 90%. Prices have escalated dramatically as a result and industries in technology and clean energy have taken a blow.

With scarcity, come higher prices. The price of neodymium has jumped from just under $30/kg in November 2009 to over $100/kg just over a year later, an increase of well over 200%. 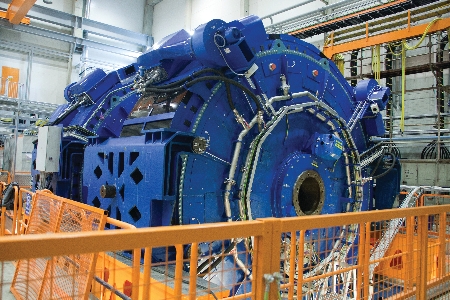 Rare-earth magnets allow for relatively high temperatures and high remanence flux, which are both valuable attributes.

Since then, a number of countries have spoken out, saying that China is seeking to capitalise on its unique position. This issue was addressed by politicians including Hillary Clinton, US Secretary of State, before the 2010 G-20 Seoul Summit in Seoul in November 2010, along with Germany and Japan.

Once China had made its announcement that it would restrict its rare earth exports quota, the news was – perhaps understandably – not received warmly by the Western renewable energy industry. However, in Beijing, a representative of a Chinese Ministry of Commerce think tank commented: ‘Foreign nations do not make sense when they blame China for reducing exports. Some of them can produce rare earths themselves. Nations that own rare-earth resources should take the responsibility of producing and help supply global demand.’

The Chinese government’s decision to suddenly regulate its rare-earth exports seems to be a worrying trend, as it weakens the appeal for permanent magnets and potentially jeopardises the use of efficient renewable energy sources.

China has also imposed an aggressive taxation policy recently that ranges from the highest percentage for exporting the pure rare-earth materials to a medium tax percentage for rare-earth materials that have undergone one refinement process within the country before exporting. One method of addressing this, as adopted by The Switch, is to manufacture machines within the country or export ready-made magnets. Partnering with the large Chinese state-owned Dong Fang Electrical Machinery (DFEM) corporation has guaranteed availability of neodymium materials for permanent magnets. Thus taxation rates vary from 0% to very low and in effect the company avoids the more aggressive forms of taxation.

Reopening mines will have a positive effect on prices and a healthier demand-and-supply scenario. Nonetheless, the direct implications of the restrictions have affected non-Chinese permanent magnet producers and their product pricing.

Looking after the Environment

While the world looks to clean energy solutions to save the environment, the current mining conditions for rare earths have been poor. Again, the industry in China mushroomed without control. Rare-earth residue contaminates the ground water supply and wind blown dust contaminates soil with toxic and radioactive substances.

A new stringent set of industry standards is expected to be introduced in China in 2011. Mines will have two years to comply, and if they do not meet the regulations, they will be forced to shut down.

Eventually, China hopes to reduce the number of operations from 123 to 10 world-class rare-earth mines and the number of processing plants from 73 down to 20. This will again aid in introducing and regulating strict environmental procedures.

Investment in the Future

Although the developments in China are having negative impacts on the companies that depend on these vital materials, lucrative investment opportunities are emerging. The development of mining and production resources in countries outside China will require heavy investment and resolute support to pass over the volatile start-up phase before reaching a mature state.

In the long term, this is in the best interests of all. It will assure industries a steady supply of the rare earths that are so vitally needed to continue the transformation to a clean-energy run world. Likewise, it will spur other innovations in renewable energy that may not have been commercially viable without the rampant price increase in rare earths set off by China.

International organisations such as REITA, the Rare Earth Industry and Technology Association, monitors and promotes rare-earth mining activities outside China. They forecast that in as little as two to three years, China would be unable to meet the 10%—15% annual growth in global demand for specific rare earths, which leads to global industry vulnerability. Furthermore, countries outside China, with the exception of Japan, are facing another obstacle. They need to rebuild their entire supply chains and infrastructure to facilitate the downstream processes of taking rare-earth materials into finished rare-earth products. These processes were foregone once the countries outsourced the entire chain to Chinese suppliers.

Significant expansion is being forecast for the use of rare-earth materials in green energy applications precisely because of their favourable results. The main thrust in development today is to increase the strength of the magnetism and resistance to demagnetisation. Additionally, new versions are being created that will resist even higher temperatures.

With the critical role of rare-earth magnets in the development of clean-technology, new ways to secure sustainability of rare-earth materials will ensure a brighter future.