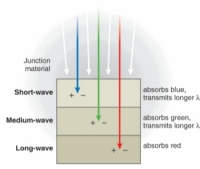 At first glance, photovoltaic cells look like nearly ideal energy sources because they can convert sunlight into electricity with no emissions. However, in practice the high cost of making solar cells and their low efficiency limit the range of potential applications. Solar cells have succeeded in a wide range of “off the grid” applications, from powering pocket calculators to satellites and the International Space Station. But at a typical cost of 25 to 50 cents per kW-h (kilowatt-hour), photovoltaic power can’t compete with conventional power plants at 1 to 5 cents per kW-h.

However, a new generation of solar cells is emerging that can convert more than 40% of input solar energy into electricity. Late last year, Boeing’s Spectrolab subsidiary (St. Louis, MO) demonstrated a multijunction photovoltaic cell with 40.7% efficiency. The development was supported by the U.S. Department of Energy as part of its Solar America Initiative, which targets supplying more than a million American homes with solar energy at 5 to 10 cents per kW-h. This summer, a team led by Allen Barnett of the University of Delaware (Newark, DE) announced a new approach to building solar cells that promises 42.9% efficiency. It is part of a Defense Advanced Research Projects Agency (DARPA) project called Very High Efficiency Solar Cells that targets efficiency of more than 50%. The initial goal is supplying portable power to soldiers in the field, who now may need up to 20 lb of batteries for a three-day mission, but Barnett says the new approach also can be used in civilian power generation, including rooftop solar cells.

Conventional photovoltaic silicon solar cells are a variation on photodiodes. As in a photodiode, incident light excites an electron from the valence band into the conduction band, but no external voltage is applied across device. Instead, the p-n junction itself separates the carriers, generating a voltage across the junction and producing a photocurrent.

The efficiency of the process is inherently limited by the range of energies absorbed by the semiconductor. Photons with energy smaller than the bandgap can’t excite electrons to the conduction band. The semiconductor absorbs photons with energy larger than the bandgap, but the difference between the photon energy and the bandgap energy goes to heating the solar cell, not to producing electricity. Those effects combine to limit a semiconductor with a single bandgap to converting at most 31% of the input solar energy into electrical energy.

Silicon photovoltaic technology is the most mature and performs reasonably for existing applications. Silicon solar cells can exceed 20% efficiency, and production versions have efficiencies in the 15% to 20% range. That’s good enough to attract support from the German government for rooftop installations feeding into the domestic power grid. Arrays of silicon cells are being installed for power generation in areas with abundant sunlight such as northern Africa, southern Italy, and Spain. But silicon is stiff and manufacturing costs remain high for large arrays, so a number of alternatives are being investigated.

Low cost per unit is critical for large-scale deployment of solar cells, such as on rooftops, making semiconducting polymers attractive because they can be coated and printed onto flexible substrates. But efficiency remains limited to about 5% for a single-element cell and 6% for a solar cell consisting of two photovoltaic layers with different bandgaps stacked on top of each other.[1] Other approaches are also being investigated, including dye sensitized solar cells, which have exceeded 10% efficiency in small-scale devices, but have yet to reach 5% over large areas.[2] Although advocates say that lower manufacturing costs would offset lower efficiency to generate power at lower cost, questions remain about operating lifetimes, and the area needed to generate large amounts of power. The nature of roll-to-roll processes “does not lead to a tightly controlled reproducible product,” says Henry Brandhorst of Auburn University (Auburn, AL), and performance of the entire array can be limited to that of its weakest element.

Stacking two or more photovoltaic semiconductor compounds with different bandgaps on top of each other can circumvent the 31% efficiency limit. In this way each compound can absorb its own slice of the spectrum as the light passes through the stack (see Fig. 1). The light first passes through the compound with the largest bandgap, which absorbs light at shorter wavelengths and transmits photons with less than the bandgap energy. The second compound has a smaller bandgap, so it absorbs photons with more than the bandgap energy and transmits those with less energy. Successive layers work in the same way.

The current record for a multijunction solar cell is 40.7% efficiency, reported by Spectrolab (Silmar, CA) at the end of last year, using sunlight focused to high intensity. A surface cell of aluminum gallium indium phosphide (AlGaInP) absorbs visible photons to generate electricity. Longer wavelengths pass through to a gallium arsenide (GaAs) layer, which absorbs wavelengths in the 700 to 1000 nm band and transmits longer wavelengths to a germanium cell at the bottom of the stack, which converts photons from 1000 to about 1700 nm into electricity. The whole structure is fabricated on a germanium (Ge) substrate (see Fig. 2)

Emcore (Albuquerque, NM) has reached 39% efficiency with sunlight concentrated by a factor of 1000 onto its own triple-junction cell, which is similar but uses slightly different III-V layers.

“Forty percent is amazing,” says Brandhorst, but the DARPA program hopes to reach 50% by converting shorter wavelengths and adding innovative optics to concentrate light and divide spectral bands. So far, Barnett’s group has not assembled a complete prototype, but measurements of separate components show that the design has an optical efficiency of 93%, which would allow energy-conversion efficiency to reach 42.9%.

The fundamental building block of the architecture is a cell with a versatile design capable of being modified to meet a range of applications (see Fig. 3). A simple Fresnel lens collects input light and directs it into a pyramidal concentrator. The concentrator design shown is hollow, but it also could be solid. The concentrator delivers the light to small dichroic optics, in this case a prism, which divides the input light between solar cells that absorb different spectral bands. The figure shows two multijunction photovoltaic elements, but initial experiments divided the light into three bands-shorter than 900 nm for GaAs and GaInP, 900 to 1100 nm for Si, and longer than 1100 nm for InGaAs/InGaAsP. Other combinations are being investigated.

The optics concentrate sunlight by only a factor of 8 to 20, much smaller than Emcore’s factor of 1000. Although higher concentration would reduce the size of the photovoltaic elements, it requires pointing the array close to the Sun and tracking solar motion to keep the solar spot on the element. Brandhorst doesn’t consider pointing a big deal, but Barnett would rather avoid it. “At eightfold concentration you don’t have to do any pointing. At 20 you have to do minimal pointing,” Barnett says. But he notes that the cost-performance point is better.

The architecture leaves broad room for adjustment, so the concentration factor can be picked to match the application. Facing a portable system toward the Sun wouldn’t be a problem for soldiers using it for power in the field. But Barnett says a lower-concentration with broader collecting angle could provide rooftop power for eight hours a day, without a pointing system.

Design of the photovoltaic elements also can be fine-tuned. Splitting bands between separate photovoltaic junctions can avoid the transmission losses inevitable when stacking photovoltaic junctions with different bandgaps. Efficiency also can be boosted by adding a GaInN/GaN cell with 2.4 eV bandgap to capture short-wavelength light. Projected contributions of each solar cell in a proposed six-junction device, ranging from a 2.4 eV GaInN/GaN cell to a InGaAsP cell with 0.7 eV bandgap have been determined (see table). For peak efficiency, plans call for four stacks-one GaInN/GaN only, one GaInP and GaAs, a third silicon only, and a fourth two compositions of InGaAsP-offering total solar-cell efficiency of 54% with 20-fold concentration, and 50% efficiency counting optical losses.[3]

Traditionally solar cells have been arranged electrically in series, but that limits total current to the current generated in the weakest cell. The DARPA project design instead gives each cell a separate connection feeding its own electrical power converter, which can be made inexpensively with modern chips.

Solar cell technology has come a long way, but the big challenge that remains is to make new applications cost-effective. Low-power off-grid applications are much easier than replacing conventional power plants.

System design is a challenge. A rooftop of solar cells sounds like a great idea, but batteries or other technologies are needed to store energy generated during the day for nighttime use. For large-scale power generation, the big economic issue is the cost of the generated power. That depends on the installation of the solar arrays divided by their lifetime and adjusted for the amount of solar illumination. Installation costs, in turn, depend on efficiency, energy storage technology, area requirements, and land costs. A system that makes perfect sense in the North African desert would be foolish in a cloudy northern city like Vancouver. The demand will also depend on energy needs and pressures to control greenhouse gas emissions.

Photovoltaics alone will not solve our formidable energy problems, but they may be a significant part of the solution.