More
Home Solar Solar’s Year of Action in the US

Utah, USA — May 9 was a big day for the solar industry. Forget big — huge. It’s a rare occasion when the most powerful person in the world takes to the bully pulpit to sing the virtues of a particular industry, and even rarer when that praise is backed up by action and dollars. But that’s precisely the gift that advocates of the U.S. solar industry were given when President Obama announced a massive, $2 billion federal funding package in combination with executive orders and hundreds of private and public sector commitments to drive forward one of the most rapidly growing renewable energy industries in the nation.

Breaking Down the Plan

In answer to the call — and in answer to the increasing demand for more widespread availability and improved affordability for solar energy — more than 300 organizations across the private and public sectors have announced commitments that fall in lockstep with the President’s vision to make 2014 “a year of action” for solar. The organizations include affordable housing developers, rural electric cooperatives, state and local governments, and a variety of retailers in the commercial sector. In combination with a number of stated administration initiatives, the commitments made will result in the deployment of over 850 MW of solar energy. They will also result in investments in energy efficiency that will decrease carbon pollution significantly, save billions per year on energy bills, and ready tens of thousands of prospective job seekers for careers in the solar industry.

Rhone Resch, President and CEO of the Solar Energy Industries Association (SEIA), called Obama’s announcement “the most significant speech the President has ever made about solar” and said it would go a long way toward educating the public about the many successes of the industry and how corporations around the country are embracing it.

Resch added that he believes the projected 850 MW of solar deployment that will result from the President’s announcement is just the tip of the iceberg. “These are programs that will have multiplying effects and could result in literally tens of gigawatts of solar deployment,” Resch said. “The list of companies is going to grow massively. The amount of commitments will also continue to grow.”

Minh Le, director of the Department of Energy’s SunShot Initiative, said the large number of announced private sector commitments — including those from corporate giants like Walmart, The Home Depot, Apple and Google — are crucial to demonstrating that solar investment has come of age as an energy alternative that makes strong business sense. 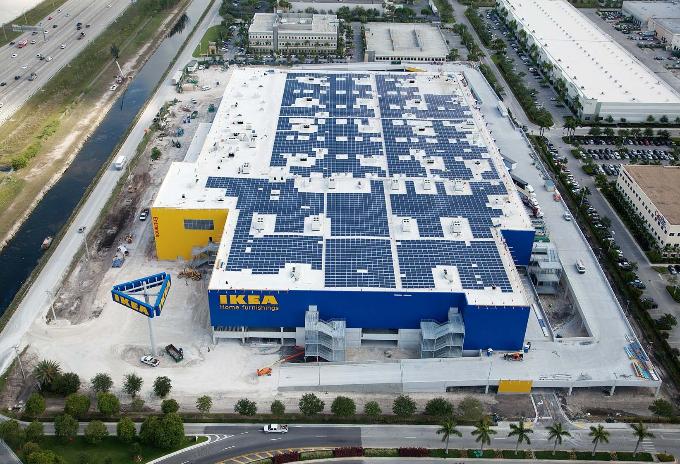 A new 1.1-MW solar array built by REC Solar atop the future Miami-Dade IKEA store opening this summer in Sweetwater, FL. IKEA is one of the of the many commercial sector leaders that made solar commitments as part of Obama’s Year of Action solar speech. Credit: IKEA.

In the President’s speech, he announced that five leading financial institutions — Citi, Goldman Sachs, Boston Community Capital, and the Clean Energy Finance and Investment Authority of Connecticut — have committed to large-scale investments and the development of innovative lending programs to further solar deployment. Boston Community Capital and Connecticut’s Clean Energy Finance and Investment Authority will each focus on funding and developing solar projects in their respective states, while Citi and Goldman Sachs have said they will focus their efforts on nationwide solar investments through certain financing mechanisms and the formation of partnerships with private and public entities. 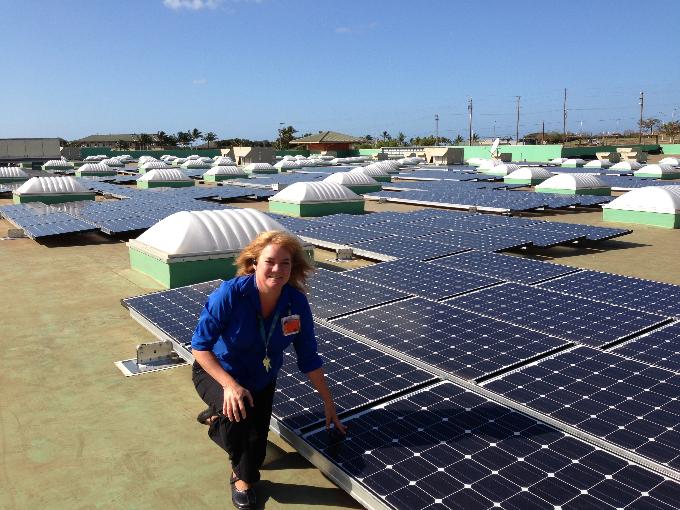 Walmart and SunEdison completed the installation of new solar power panels on the Walmart store in Kapolei, HI. Walmart is one of the of the many commercial sector leaders that made solar commitments as part of Obama’s Year of Action solar speech. Credit: Walmart.

But it’s the inroads being made on the federal side that Resch believes could prove the most impactful when it comes to fostering exponential growth for the U.S. solar industry. This includes building on the proven success of the Defense Department’s renewables program by enabling the General Services Administration (GSA) — which owns and operates all federal government facilities — to take advantage of innovative financing options that will lower energy costs and increase renewable energy production through the sharing of resources.

“What this means is third-party ownership,” Resch said. “This would allow the biggest energy consumer in the world to be able to use some of the more innovative financing techniques developed in the solar industry to deploy literally gigawatts of solar on government-owned facilities throughout the country — from federal courts, to VA hospitals, to post offices. The list goes on. Literally every county in the country has some type of federal facility. That alone is a very important piece.”

Additionally, it was announced that the Treasury Department and the Internal Revenue Service will work to clarify the manner in which certain investment rules apply to renewable energy installations, and specifically to real estate investment trusts (REITs).

“The Treasury Department and the IRS will be considering how to update rules and how they treat REITs,” Resch said. “This is massive, because if you open up the REIT structure of financing for third-party ownership, it could be the Holy Grail for financing solar projects around the country.”

Le said further discussions exploring new solar financing models were held at the recent SunShot Grand Challenge Summit. He pointed to a keynote speech by Billy Parish, founder and president of solar project finance company Mosaic, as indication that creative discussions surrounding the development of innovative financing options abound. “Parish announced a new program that Mosaic will be taking on which will make it as cheap, or cheaper, for consumers to get solar loans as an alternative to relying on solar leasing,” Le said. “This is one of many really exciting opportunities that will be forthcoming in the next few years.”

Bringing the Economic Benefits of Solar to the Underprivileged

Another important component of President Obama’s far-reaching solar plan focuses on lowering out-of-pocket energy costs for American families and businesses. To jumpstart those efforts, the administration has called upon a number of leaders in multifamily affordable housing to look to increased solar deployment with the intent of not only lowering bills for tenants, but also to bring much need economic boosts to low income communities.

EAH Housing, a nonprofit housing development and management corporation, is among more than two dozen multifamily affordable housing leaders who have made commitments to expand the use of solar in their properties. Currently, 37 EAH Housing properties have 2.3 MW of installed solar capacity and two more projects are expected to be completed in 2014. In coming years, EAH Housing has expects to add 10 MW of solar capacity in its effort to provide 10 percent of the White House’s Climate Action Plan goal of 100 MW of installed capacity at federally subsidized housing.

“Solar has become a key tool in our strategy to support our residents and affordable housing communities,” said Laura Hall, COO for EAH Housing. “By upgrading existing communities, we can extend the long-term affordability of a property for the benefit of working families, their children and a growing senior constituency. 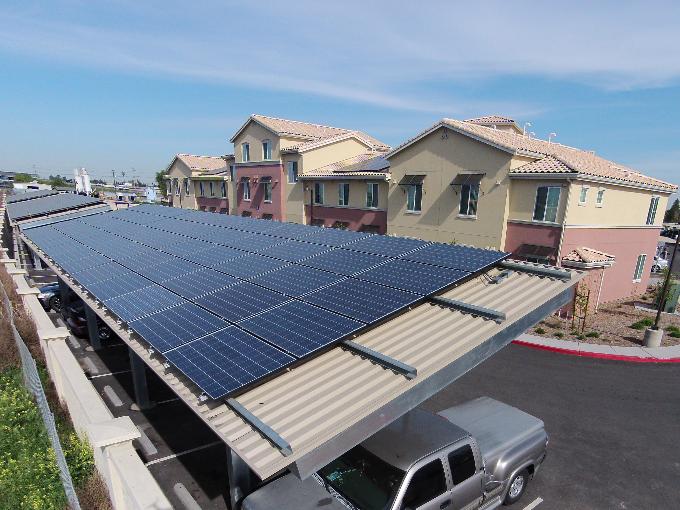 Solar is a feature on some of EAH Housing Units at the Avena Bella Development in Turlock, California. Credit: EAH Housing.

In addition to encouraging affordable housing leaders to make use of solar technology to power their multifamily dwellings, it was also announced that Fannie Mae has joined forces with the U.S. Department of Housing and Urban Development (HUD) and the Federal Housing Administration (FHA) to provide financing that would enable property owners to make energy-saving enhancements.

Promoting Job Growth through the Building of a Skilled Solar Workforce

One of the key implications of the President’s “Year of Action” announcement can be summed up in a single, powerful word: jobs. In specific, and of utmost appeal to American workers suffering the ill effects of stateside jobs migrating to other countries, are the creation of jobs that cannot be outsourced. This consists not only of hands-on solar installation employment opportunities that will come as a result of increased solar deployment throughout the U.S., but also those that will result from planned training programs offered by community colleges across the nation.

With the stated aim of helping 50,000 workers enter the solar industry by the year 2020 — and building on the SunShot Initiative’s track record of having trained 22,000 people for solar industry jobs in the last four years alone — the Department of Energy’s Solar Instructor Training Network (SITN) has committed to supporting increased availability for training programs on community college campuses.

Le said training focuses not only on providing the skills necessary to be able to perform solar installations, but also encompasses training in related fields. “We’re moving beyond typical solar installer training programs to include training in other related fields, such as real estate appraisal,” Le said. He pointed to recent reports that found homes with solar installations selling for more than their equivalent counterparts as evidence of the importance of a more well-rounded approach to solar education. Le said coursework would also be made available to local government code officials responsible for permitting solar systems, so that they will have a better understanding about the intricacies of residential PV systems.

“This announcement recognizes that solar is one of the fastest growing sources of new jobs in this country,” Resch said. “Last year, the solar industry increased employment by 20 percent. We now have 145,000 people employed in the industry and that number is going to continue to grow by 20 to 40 percent per year. We need more people to become trained. That means creating opportunities for those who are unemployed, those in other industries that have struggled, and perhaps most importantly creating job opportunities for our returning troops.”

While the state of the U.S. solar industry may appear to be lunging forward, Resch cautions that President Obama’s sweeping plans are just the first of a series of necessary steps that will have to be taken in order to continue the momentum.

“We have a lot of work ahead of us,” Resch said. “It’s good to have the support of the administration, but it also means a huge amount of work to ensure the rules are put in place that actually work effectively. It’s not a done deal, but it is a great beginning and an opportunity for the industry to rally together and focus on what it’s going to take to continue this growth and open up new markets across the entire country.”

In addition to announcing these corporate solar commitments, Obama has shown his own commitment to solar by installing solar panels on the white house. The video below offers some great details about the project, and explains how and why it was done.

This article is the cover story for the July/August 2014 digital edition of Renewable Energy World. You can preview the issue at this link.