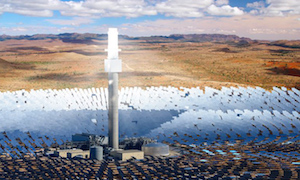 A 150MW solar thermal power plant will be built in South Australia by global company SolarReserve.

The Aurora Solar Energy Project located in Port Augusta, about 300km north of the South Australian capital Adelaide, will incorporate eight hours of storage or 1,100 MWh, allowing it to operate like a conventional coal or gas power station.

The AU$650 million plant — the biggest of its kind in the world — will have a capacity of about 135 MW under normal operating conditions with the ability to increase that output in favorable conditions.

It will be situated about 150km northwest of Jamestown, where Elon Musk will install the world’s largest Lithium-ion battery at Hornsdale Wind Farm.

In September 2016 the State Government launched a tender process to procure 75 percent of its long-term power supply in order to attract a new competitor into the electricity market, increasing competition and putting downward pressure on power prices.

The offer from SolarReserve was the lowest-cost option of the shortlisted bids with the Government paying no more than $78/MWh.

“Aurora will provide much needed capacity and firm energy delivery into the South Australian market to reduce price volatility,” he said.

SolarReserve will establish an Australian headquarters in Adelaide by the end of the year with construction of the Aurora plant on a vast pastoral station, pictured below, about 30km north of Port Augusta.

The project will use thousands of mirrors (heliostats) to reflect and concentrate sunlight onto a central receiver on top of a tower. The process heats molten salt, pumped to the top of the tower and flowing through the receiver, to 565 degrees Celsius.

The molten salt provides a stored heat source that is used to generate steam to drive a single turbine that generates electricity. The facility can generate power at full load for up to eight hours after sunset.

The project is a big win for the Port Augusta community, which is still recovering from the closure of a major coal-fired power station in the town last year.

“The Aurora Solar Energy Project will enhance South Australia’s reputation as a leader in clean, cheap renewable energy,” he said.

“This is a terrific result for the people of Port Augusta who have campaigned hard to deliver this outcome for their community.”

It will be the second solar thermal plant in the Port Augusta region. Sundrop Farms opened a greenhouse facility in October powered by thermal solar energy to grow more than 15,000 metric tons of tomatoes a year.

South Australia leads the nation in the uptake of wind energy and rooftop solar with renewable sources accounting for more than 40 percent of the electricity generated in the state. However, the closure of two coal-fired power stations in recent years has increased South Australia’s reliance on energy supplies from the eastern Australian states, particularly in times of peak demand.