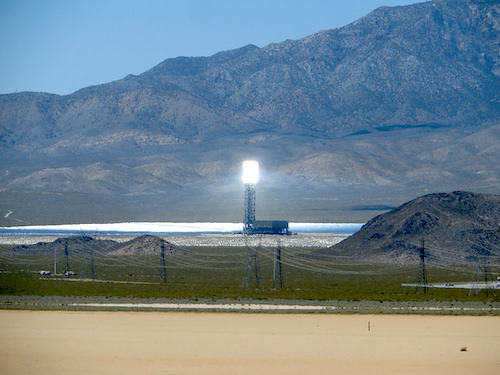 A closely held California renewable-energy developer is proposing the world’s largest solar farm in the Nevada desert, a $5 billion project that would rival the capacity of two nuclear power plants.

There are still a few details to work out for the 2-GW Sandstone project.

SolarReserve LLC needs to pick a site, line up financing and find buyers for the power, Chief Executive Officer Kevin Smith said in an interview Thursday. It will use solar-thermal technology, which is more expensive than standard solar PV power, but also has storage capabilities so it can send power to the grid all night long.

“Absent significant state- and federal-level subsidies beyond just the investment tax credit, there is virtually no way this project will be able to deliver electricity at a price that’s competitive today, much less five years from now,” said Nathan Serota, an analyst for Bloomberg New Energy Finance.

Instead of converting sunlight directly into electricity with photovoltaic panels, solar-thermal plants use thousands of mirrors to focus sunlight onto towers topped with vats of molten salt. The salt can reach 1,000 degrees Fahrenheit (538 degrees Celsius) and remain hot for as long as 10 hours, creating steam to power generators. SolarReserve has used the technology for a 110-MW power plant that’s in operation in Nevada, and is planning projects in Chile and South Africa.

The sprawling Nevada project would have 10 towers and cover 15,000 acres. The current biggest solar-thermal plant in the world is the 392-MW Ivanpah facility in California’s Mojave Desert. It has three towers and went into operation in 2014, and doesn’t have storage capabilities.

SolarReserve is eyeing two potential building sites on federal land, both of which will require new transmission lines, another hurdle.

The project would be built in stages over seven years and the company is seeking to break ground within three years, Smith said. SolarReserve plans to market electricity from the sprawling project to California utilities, which under state law must source half their power from renewable sources by 2030.

“We are presenting this to the California market as a more viable option than trying to deploy hundreds of thousands of individual batteries,” said Smith.