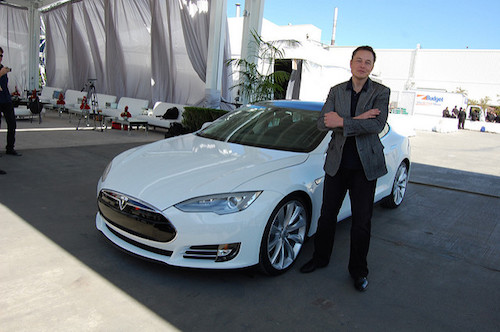 SolarCity Corp. is facing near-term roadblocks as installations slow and the pending acquisition by Tesla Motors Inc. hinders its financing efforts. For billionaire Elon Musk, the long-term picture is more significant, as he rolls out more products and services that will make the biggest U.S. rooftop solar company a key part of his energy strategy.

SolarCity is developing a roofing product that incorporates solar technology and a storage system that uses Tesla batteries at customers’ homes to provide power-management services to utilities. Both will be introduced “in the coming months,” according to a statement Tuesday.

Musk, the chairman and largest shareholder of Tesla and SolarCity, has touted his vision of a smart home powered by solar panels that charge electric cars. The new products go even further to demonstrate how he plans to fit the companies together, creating an energy company with broad reach that incorporates storage technology to make photovoltaic power a more important part of the grid.

“Solar and batteries go together like peanut butter and jelly,” Musk said Tuesday on a conference call.

SolarCity’s board agreed Aug. 1 to a reduced offer of $2.6 billion in Tesla shares, a little more than a month after Musk made a $2.8 billion unsolicited offer for the San Mateo, California-based company.

The pending deal delayed some financing deals for SolarCity, reducing its cash by 65 percent. The company held held $145.7 million in cash and cash equivalents on June 30, down from $421.4 million a year earlier.

“Because of the Tesla Motors acquisition proposal, we experienced greater-than-usual delays in closing new project financing commitments,” Chief Executive Officer Lyndon Rive said in the statement. At least one financing deal closed since the end of the quarter, as cash and cash equivalents increased to $214.6 million as of Tuesday.

The deal comes as SolarCity’s growth slows. The company expects to install 170 MW of panels in the current quarter, down from 201 MW in the second quarter. The solar company has trimmed its growth forecast after a strategic shift in October to focus on profitability, and its shares have slumped by more than half this year. It expects total installations of 900 MW to 1 GW for 2016.

Tesla and SolarCity shareholders must approve the deal, which the companies expect to close in the fourth quarter. Neither has set a date for shareholder votes.

In the meantime, SolarCity is developing a roofing product that will incorporate photovoltaic capabilities. Musk said it would appeal to homeowners who don’t like the look of rooftop systems, as well as people with aging roofs.

“It’s a solar roof — not a thing on the roof,” he said on the call. “If you need to replace your roof in the next five years, you’re not going to get solar. What if your roof looks better and last longer?”

The storage service will be able to provide frequency-regulation services to utilities, by monitoring energy flow on the grid and quickly dispatching or absorbing power when needed.

“We are releasing products our competitors just don’t have,” Rive said on the call.