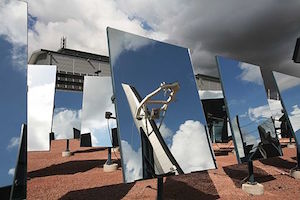 Solar plants that supply electricity at competitive prices after the sun goes down are about to become a reality in the Middle East, according to one of the region’s biggest developers of power plants.

ACWA Power International CEO Paddy Padmanathan confirmed his company is the low bidder on a $1 billion project that will feed electricity to the grid for the Dubai Water & Electricity Authority between 4 p.m. and 10 a.m. More such plants are likely to follow because Chinese companies will start driving down the cost of equipment, he said.

The 200-MW Dubai contract, which runs for 25 years, will harness a two-decade old technology called concentrated-solar power (CSP), or solar thermal. Unlike solar PV, which generates a charge directly from the sun’s power, thermal plants use mirrors to concentrate heat on water, turning it to steam to drive a turbine. The heat can be stored in molten salt to be used later. The technology to date has slipped behind PV on cost but is quickly becoming more competitive, the executive said.

“I expect concentrated-solar power, within 18 months, to be head to head with combined-cycle gas, if not more competitive,” Padmanathan said in an interview in London. “The focus has been on PV and batteries, but there’s a limit on how long they can hold a charge for. We’re proving that CSP can work through the night.”

Since it can retain heat, the plant can keep working after dark. The sun’s energy in some cases can heat molten salt to 490 degrees Celsius (914 degrees Fahrenheit), which allows operators to predict when electricity will flow.

While solar thermal plants are becoming cheaper, PV costs are falling too, raising questions whether the Dubai project really will be as attractive as ACWA expects, said Jenny Chase, head of solar analysis at Bloomberg New Energy Finance.

“This plant in Dubai is for delivery by 2021,” Chase said. “By then, we’re expecting solar PV and batteries to be in the same order of magnitude for cost and will be a lot more flexible than a solar thermal plant. Also, a lot of these projects are operating below what they’re meant to, such as the entire Spanish fleet and some in India as well.”

There are 319 GW of PV panels installed worldwide, compared to about 5 GW of solar thermal, according to BNEF data. The mass deployment has driven down costs of solar panel equipment by about 70 percent since 2010, with the latest record set in Abu Dhabi at 2.45 cents per kWh. In comparison, solar thermal was around 15 to 18 cents per kWh until recently.

“There are currently just two suppliers in solar CSP,” Padmanathan said. “The others have gone bankrupt. I know of at least five Chinese companies that are starting to enter the market.”

ACWA, which is based in Riyadh, Saudi Arabia, bid 9.45 cents per kWh, almost cutting in half the cost of CSP. Each of the bidders were also asked to submit an alternative tender. The offtaker will choose between the bid and the alternative bid, so the price may be even lower.

“I’m also hoping to build one in Saudi,” Padmanathan said. “Right now they’re tendering for solar PV and wind, but I think they’ll want a CSP project as well, especially when they see how cost competitive it can be.”