New Hampshire, USA — Highlighting once again that one of the key stories for renewable energy in 2014 will be renewable energy finance, Q1 2014 shows high growth for investments in solar. Total global corporate funding in the solar sector, including venture capital (VC), private equity (PE), debt financing, and other equity financings raised by public companies, came in at $7 billion, compared to $5 billion in Q4 2013, according to a report just released by Mercom Capital Group.

The report dives into venture capital funding, project funding, corporate mergers and acquisitions and third-party lease funding. All sectors showed an increase in the number of dollars invested and/or number of transactions showing just how favorably investors view solar. 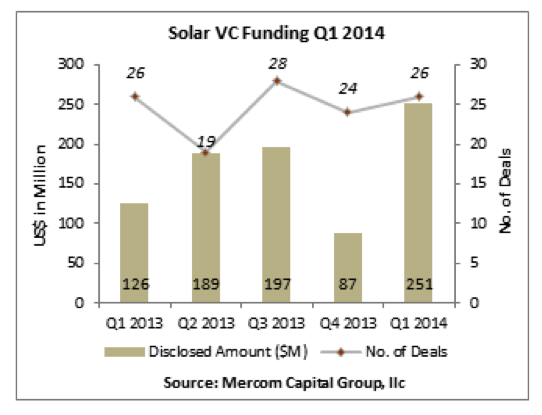 Raj Prabhu, CEO of Mercom Capital Group, commented, “It was a robust quarter for solar as financing activity surged in almost all areas. The big story continues to be strong capital markets. VC funding was up with several funding deals involving investment “platforms,” while third-party residential/commercial funds continue to raise record amounts.”

The largest VC/PE deal in Q1 2014 was the $125 million raised in a Series C round by Renewable Energy Trust Capital, a finance platform established to acquire and own solar projects and provider of a single comprehensive equity capital source. Investors included BlueMountain Capital Management, and Global Cleantech Capital.

There were 43 large-scale project funding deals totaling $3.6 billion announced in Q1 2014, which break out as follows.

Third-party Leasing M&A and Project Acquisition on the Rise

It was also a record quarter for project acquisitions in Q1 2014, totaling $1.5 billion in 42 transactions, with more than 1.7 GW in solar projects changing hands. See the chart below for more on this. 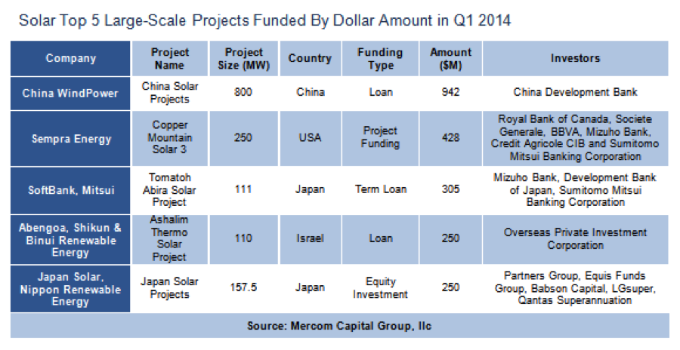 To learn more about the 79-page report or to purchase a copy, click here.