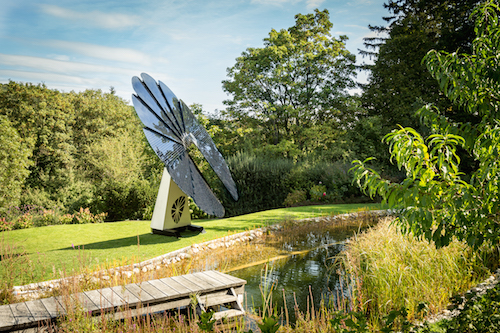 An innovative solar plus storage solution that was launched in Europe about 2.5 years ago is coming to the U.S. The product is called “SmartFlower” and it looks like a gigantic sunflower with a short, fat stalk. The company said it has sold about 1000 units into 20 different European countries since launch.

The SmartFlower wakes up at sunrise, fans out its solar panels to 194 ft² and automatically cleans itself in preparation for capturing the sun’s rays. SmartFlower then turns to face the sun at a 90°angle, and follows the sun throughout the day using dual-axis tracking to maximize solar energy yield. One SmartFlower produces the equivalent of a 4 kW rooftop system, according to the company.

Energy harvested during the day is stored in the lithium-iron-phosphate (LiFePO4 or LFP) batteries and managed through a “smart” energy management system that helps the homeowner decide when to use power from grid, the battery or the solar panels. The company is working on more smart features that that, for example, might enable the system to decide what to do if there is too much power — perhaps suggesting the homeowner turn on the air conditioner or the pool pump.

Founder and managing partner Alexander Swatek explained that the panels are high-efficient monocrystalline cells and are also produced in Austria (as is the rest of the product).

“We use a very special technology of 2mm hardened glass, which you can bend in any direction and it doesn’t crack, which is very important for outdoor usage,” he said.

From Utility-Scale Wind to Residential Solar

While the product itself is quite interesting and has won numerous design awards including the Red Dot 2016 Award and the Green Good Design Award for 2016, what’s also interesting is that the man who is passionately fighting to keep offshore wind project Cape Wind viable, is behind the company’s move to North America.

Jim Gordon has been trying to get his 130-MW offshore wind farm built off the coast of Massachusetts since 2001 and has successfully defeated 26 lawsuits against the project all filed by citizen groups who don’t like the aesthetics of the project. The Koch brothers have supported the opposition. In 2015 the project lost its PPAs because it had not begun construction and just the week, the project suffered another loss as the federal appeals court threw out two of the government approvals for the project.

Gordon remains hopeful that Cape Wind will one day come to fruition but for now he’s throwing his passion for clean energy toward the SmartFlower.

“I saw this on the internet about 3 months ago and the next day I hopped on a plane to Vienna, Austria,” he said. “The very next day.”

Gordon wrangled a meeting with founder Swatek and insisted that he become an investor and bring the product to the North American market.

“I like to be on the leading edge,” said Gordon, adding: “For so many years I’ve been dealing with environmental regulators and bureaucrats and NIMBYs (not in my backyard). I want to leapfrog over all of that and I want to empower the individual.”

The Smart Flower puts clean energy in the hands of the homeowner, business, or municipality. “It’s in your hands to make a decision,” said Gordon.

With a price tag of US $16,900, the product’s price point is right in line with a typical 4-kW system in most parts of the U.S. Plus, it comes in eight color choices and takes just a few hours to install said the company.

The SmartFlower was on display at Intersolar North America in San Francisco from July 12-14 and is considering exhibiting at Solar Power International in September. 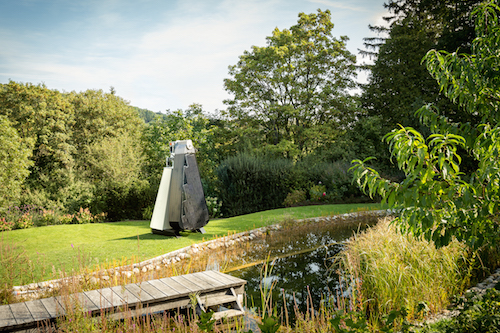