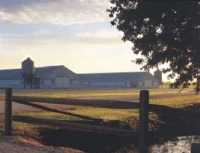 A first-of-its-kind solar-powered poultry house will soon begin operations at a [Delaware] farm owned by Allen Family Foods Inc. The house is part of a research project to evaluate the use of solar power as an economical source of energy for poultry houses.

The cost of grid electricity in Delaware has significantly increased over the last 12 months, and this has adversely affected the poultry industry. Poultry houses are highly energy dependent; chickens must be kept at carefully controlled temperatures with appropriate ventilation. Energy costs are borne by the growers, who are independent operators contracted by poultry companies to raise day-old chicks to maturity. Determining if solar power makes economic sense to the poultry industry will be rigorously evaluated during three years of study at the pilot, solar-powered poultry house. A research team comprised of University of Delaware faculty, students and professionals will monitor the house to assess the system’s efficiency in collecting and using solar power. Weather data at the project site also will be monitored. On sunny days, the solar radiation will be converted to electricity. This will be used to power the poultry house; any additional power that’s required will be drawn from Delmarva Power’s grid. At times when the photovoltaic system produces more power than the loads require, excess power will be directed to a back-up battery bank and to the grid via net metering. Delmarva Power has agreed to give credit for energy sent to its grid at the current market rate. The project is a partnership between Allen Family Foods, WorldWater & Power Corp. and GE Energy. Other contributing partners are the University of Delaware, the Delaware Department of Agriculture and the Delaware Department of Natural Resources and Environmental Control. “This project is important to help our poultry industry stay competitive and our producers remain profitable, as well as cut our dependence on foreign oil,” Delaware Secretary of Agriculture Michael Scuse said. Charles C. “Chick” Allen III, chairperson and CEO of Allen Family Foods, offered the use of a company-owned farm in Laurel for the pilot study. “We work with 550 independent contractors on Delmarva who raise our chicks,” Allen said. “I was happy to have the opportunity to collaborate on a research project that has the potential to reduce costs for these growers. I want to do anything I can to maintain the economic viability of the Delmarva poultry industry.” The pilot project will be operational in the first quarter of 2007, which is remarkable considering that the project partnership was forged less than six months ago. Robin W. Morgan, dean of UD’s College of Agriculture and Natural Resources, said that the project began as a modeling effort by the UD Center for Energy and Environmental Policy, and then took off at a meeting of the Delaware Science and Technology Council, when the topic of rising electricity costs was discussed. The council, which is chaired by Delaware Lt. Gov. John Carney, is a group of state officials and business and academic leaders who work to advance technology in Delaware. The pilot photovoltaic system, which is designed to evaluate a variety of use options and generate extensive research data, will cost approximately $500,000, but the project is eligible for a rebate of $250,000 from the Delaware Green Energy Program. Solar-powered systems also are eligible for state and federal tax credits. In addition, poultry growers can apply for renewable energy grants from the U.S. Department of Agriculture, and they will be able to earn “green credits” for their use of alternative technology and sell these credits to other businesses. “Success in this initiative will have a number of important benefits,” David S. Weir, director of the Delaware Biotechnology Institute, said. “First, it will improve the profitability and sustainability of the poultry industry in Delaware, thereby strengthening the state’s economy. It will help retain jobs in the poultry industry and create new jobs in solar cell production. And it will demonstrate a process whereby the public, private and academic sectors can get together to solve real problems. “There is one caveat,” Weir said. “For Delaware to be a leader in alternative energy technologies, the enactment of appropriate legislation will be required.” Margo McDonough has been a professional writer and editor for more than 20 years. Her articles have appeared in the Philadelphia Inquirer, The (Wilmington DE) News-Journal as well as a number of other publications. This article was reprinted with permission from the University of Delaware.