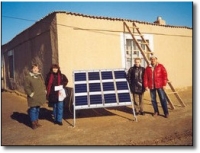 Villagers in Kostruba, a settlement on the edge of the Qizilqum Desert, 250 kilometers northwest of Nukus, capital of the semi-autonomous Uzbek region of Karakalpakistan, have electricity for the first time, thanks to a United Nations Development Program (UNDP) solar-power initiative.

Kostruba, Uzbekistan – November 26, 2003 [SolarAccess.com] The basic system consists of a panel of photovoltaic (PV) cells charging a battery inside a yurt (the traditional home of the remote desert region) that provides enough power to run an electric light and either a radio, small television or fan for up to eight hours. The Integrated Regional Information Networks (IRIN), of the United Nations Office for the Coordination of Humanitarian Affairs (OCHA), reported that the UNDP solar energy project has given the villagers of Kostruba something special to celebrate this Eid, the Muslim holiday marking the end of the holy month of Ramadan. “Before, these people had to subsist with kerosene lighting,” said Gulnora Rashidova, of UNDP’s clean energy initiative. “This was expensive, dirty and dangerous, and there were many fires.” IRIN reported that following UNDP’s introduction of solar PV technology, the long winter evenings in Kostruba are now filled with the sounds of laughter of village children gathered around a small television to watch Russian-made cartoons, while in the open yurts, village elders sit drinking tea and talking as a low-wattage energy-efficient bulb burns above them, allowing them to chat happily well into the night. Solar technology is also helping to provide Kostruba with clean water. “Two solar panels now power a pump that provides 400 liters of clean water per hour,” Rashidova said. “The fresh water has helped reduce the toll of diarrhea and other waterborne diseases that particularly afflict young children in rural areas with little water.” According to Botrykhan Bozgulbaev, Kostruba’s school principal, there has been a real improvement in the overall health of the community since the pump began working. UNDP has focused on Karakalpakistan as it is one of the most underdeveloped regions of Uzbekistan, and tends to get overlooked by development agencies, the government and foreign donors. “Without clean water, gas or electricity and subsisting on livestock farming, the residents of Kostruba have very little,” said Said Inogamov, a consultant with UNDP’s Clean Energy for Rural Communities in Karakalpakistan project. “In fact, the only resource in abundance is sunlight. That’s why we picked this place: it receives around 260 sunny days per year.” According to Inogamov, isolated communities like that of Kostruba had no chance of ever being connected to the electricity grid, but still needed the benefits of electricity. “Generators do the job, but the fuel is expensive and hard to come by, so solar technology has to be the answer,” said Inogamov. “Once installed, the systems are virtually maintenance-free and they offer a real leap forward despite their limitations.” Each domestic solar installation costs around US$2,000 for the hardware and a further $1,500 to transport and install in this remote region. But once local people have been instructed on how the system works and how to look after it, ongoing costs are minimal. “We’ve done a lot of work in trying to educate people and foster a sense of ownership,” said Inogamov. “For example, we’ve translated the (instruction) manual into Karakalpak (the regional dialect).” The project has been able to assist 27 families in the village, as well as supplying a solar-powered satellite dish, decoder and television set to the local school so the community has access to television channels. “Even during Soviet times there was no power here,” said Alautin Serkebaev, a local official from this largely ethnic Muslim Kazakh region. “Now at last our children can study at night; and we can know what is going on in the world through radio and television.” Some villagers, who had had no experience of electricity, initially met the solar electric installations with suspicion; and this led to a temporary social imbalance. “Many of our people refused to agree to the scheme, but this was really down to ignorance,” said Serkebaev. “Now they see the benefits enjoyed by their neighbors, everybody wants the system.” The next step, according to UNDP, will be to get more homes in the region equipped with solar electricity and to find a way to drive down costs. “We need to work towards manufacturing the system in Uzbekistan,” said Rano Bayhanova, a UNDP technology transfer project manager. “This will save money and provide essential jobs. Already plans are advanced to producing solar heating panels locally, this will be a big step forward.”