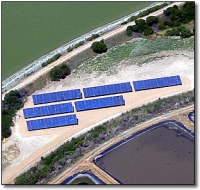 San Rafael, California – June 1, 2004 [SolarAccess.com] LGVSD provides sewer services to over 32,000 residents in an area that extends from the Marin Civic Center to Marinwood. On average, the District treats 3.56-million gallons of wastewater per day. Taking all the water pumping into account, and California’s generous rebates and incentives for solar projects, LGVSD saw a perfect opportunity to install a solar-electric project. “The decision to go solar was a natural one for us,” said Megan Clark, board member of Las Gallinas Valley Sanitary District. “Now we’re reducing our impact on the atmosphere by using 100% clean solar energy to power our reclamation pump station. The fact that the system pays for itself made the decision to install the system an easy one.” The District hired consulting engineer Tim Holmes of Kenwood Energy to develop a plan to increase the pump station’s overall efficiency and power the station with solar power. Additional pump station upgrades, to be completed later this year, will significantly reduce the total energy required to pump reclaimed water to and from the District’s ponds and to the pasture irrigation pivots. The solar power system was sized to meet the reduced pump station energy load and zero the pump station’s energy bills. Holmes also helped the District to select and manage a system integrator to supply and install the system. After completing a competitive selection process, the District selected Prevalent Power, Inc. to engineer, design and install the system. The majority of the construction labor was provided by union electricians from the International Brotherhood of Electrical Workers, Local Union 551. Solar Depot of Petaluma, California supplied the solar modules and power conditioning equipment. Additional subcontractors included Nelson Construction and Custom Tractor, also of Petaluma. The project was completed in April of this year. “The District and the Board of Directors deserve to be congratulated for taking the step to install a clean solar power system,” said Arno Harris, CEO of Prevalent Power, Inc., the local company that installed the system. “It’s a step that will help the environment, act as an important learning tool for the local community, and, in the long term, save money on energy costs for the District.” The system is made up of 504 BPSolar 3160B photovoltaic solar modules. Rated at 80.6-kilowatts peak power, the system uses a Xantrex 100 kW inverter to convert the DC power from the modules to AC power. Working in parallel with the utility grid, the system turns the pump station’s meter backwards during peak hours in the afternoon. After the pump station is upgraded to be more energy efficient, the solar power system will effectively zero the station’s electrical bills, saving the District around $22,000 per year. The system is expected to pay for itself in about 11 to 12 years, and will then provide another 20 years or so of “free” power to the District. Over its 30-year lifetime, the system will save the District an estimated $1.1 million in avoided energy costs Prevalent Power and Solar Depot provided financing for the system installation. Prevalent Power arranged for half of the system’s cost to be paid for by the California Public Utility Commission’s Self-Generation Incentive Program. Prevalent Power also provided construction financing. Solar Depot helped to finance the equipment purchase with Prevalent Power.