Are all the sunny reports of growth and jobs in the solar energy industry reliable?

Paula Mints, the Principal Analyst for the Navigant Consulting PV Services Program, only tells what the Sinatra/Rat Pack boys used to call the “ehmess.” That’s Hebrew for “truth” and the Mints/Navigant data is only ehmess. The word everywhere in the New Energy world is that if Paula Mints reports it, take it to the bank.

Mints says the solar photovoltaic industry left a lot of panels on the shelf in 2008 and 2009.

The 2008/09 production far outstripped demand and, as a result, installations in 2009 were greater than panel sales. The result is the lowerst cost per watt (peak) ever.

The industry, which has shifted dramatically in the last decade from remote, off-grid systems to urban and suburban grid-connected systems as it grew from the megawatt level to the gigawatt level, is also driving toward lower costs both with its increased production capacity and with innovative financing and incentive plans that are bringing the cost of an installed system down. ::continue:: 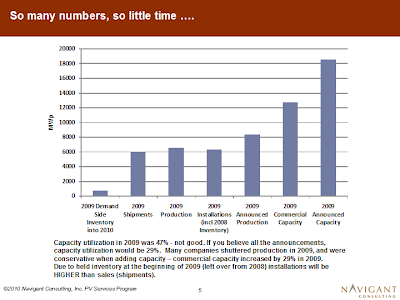 In 2009, the bulk of the manufacturing of photovoltaic panels – over half – was in China, Asia and the non-U.S., non-European, non-Japanese parts of the world. On the other hand, the demand for PV – over 80% – was in Europe.

Mints’ forecast is for continued growth in 2010, compromised by some reduced incentives (especially in Europe), a hesitantly recovering world economy and the need for new transmission (among other factors). She sees much bigger growth for solar PV in the 2011-thru-2013 period. 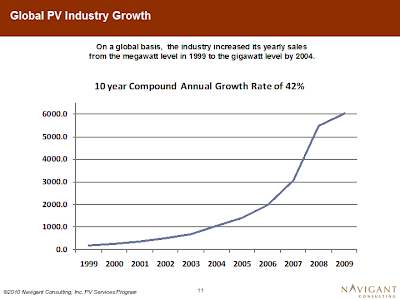 This post is based on Solar Forum: Where are we going and how will we get there? by Paula Mints (February 17, 2010, Rahus Institute Solar Forum presentation)