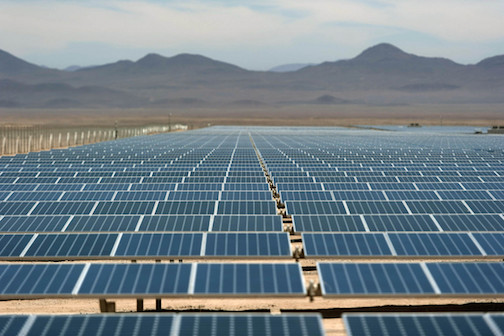 Valhalla Energia is seeking partners to build a 600-MW solar project in Chile that will incorporate hydropower to deliver energy 24 hours a day.

The company is in talks with investors to raise as much as 40 percent of the estimated $1.3 billion needed for the project — $900 million for the solar component and $400 million for a 300-MW hydropower system — according to Juan Andres Camus, Santiago-based Valhalla’s co-founder and chief executive officer. The rest will come from bank loans.

“We are looking for sponsors that can be part of the project as equity,” Camus said in an interview in Santiago on March 18. “We are in advanced negotiations.”

The Cielos de Tarapaca solar project aims to produce electricity around the clock, using an integrated solar and hydro system that pumps sea water uphill to a reservoir during the day and letting it flow through turbines at night. The project is in Chile’s northern Atacama desert, the same region where the struggling Spanish developer Abengoa SA recently mothballed its $1 billion, 110-MW solar-thermal power plant that retained heat to generate power at night. The two plants represent rival technologies to store solar energy and guarantee supply after sundown.

Valhalla received environmental approval in January for the project and expects to start construction in the second half of this year. Both the solar and the hydro plant will be about 100 kilometers (62 miles) southeast of the city of Iquique and are scheduled to go into operation in 2020.

“It is an expensive and risky project as the technology is rare in the region,” said Ana Verena Lima, an analyst with of Bloomberg New Energy Finance in Sao Paulo. “But of course everything will depend on its efficiency, on the contracts and financing conditions they can get.”

Valhalla is competing with a 616-MW solar plant owned by Empresa de Desarrollo de Energias Renovables Alen Walung SA, now under construction in Chile, to be the largest in Latin America.

In terms of profitability, Cielos de Tarapaca will be competitive with new thermal electric plants, according to Camus, who didn’t provide details on financing. The company will focus on long-term, bilateral contracts with the copper mines that dot northern Chile and wants to participate in the next auction of Chilean power contracts later this year. It is negotiating with local and international banks for financing.

“The big opportunity in Chile is energy supply 24 hours a day and, for now, solar energy cannot accomplish that,” Camus said. “The hydro project is a very efficient way of storing energy.”