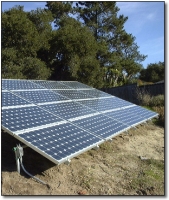 Several Zambian villages in remote parts of the country that have not been connected to the national power grid have benefited from an initiative to provide solar-power to their communities.

Lusaka, Zambia – June 14, 2004 [SolarAccess.com] In the modest offices of Nyimba Energy Service Company (NESCO), in eastern Zambia, a sign reads: “Solar is good … even in thatched houses, it will reach you wherever you are.” NESCO has pioneered a solar energy project, supported by the Swedish International Development Agency, that has transformed everyday life in the rural areas where it has been piloted. One such area is Nyimba, a remote district 320 kilometers east of the capital Lusaka, where residents are no longer restricted to candlelight or paraffin lamps. At Katalila, a village in the district, Abina Lungu now has a booming business grinding villagers’ maize well into the night with the help of solar lighting. Meters away from the grinding mill, Lungu’s house is also solar-powered. “I pay K30,000 (about US $6.25) as a rental charge every month to NESCO but we now want to buy our own solar systems because this has helped us a lot,” he told IRIN. Lungu has calculated that it would be cheaper to buy a solar-power system rather than rent one, as he expects prices for the systems to rise, given their popularity. To get solar-power into a home, shop or business, NESCO installs a system which includes a solar panel, battery, charge controller and power points at K160,000 [US $33.33], including the contract fee. Thereafter, consumers pay a monthly rental fee. “For me, it works out cheaper to use solar because paraffin is more expensive and even if electricity comes to Nyimba, not all the people will get connected,” said Lungu. He keeps a battery in his house, in a lockable ventilated cabinet with access for maintenance inspection, while a solar panel absorbs sun rays from the roof to light the bulb in his home. Lungu is one of a hundred NESCO customers fortunate enough to be connected, among them a clinic, a shop and a hotel. About 360 people are on NESCO’s waiting list. “We are struggling to satisfy demand,” said Nesco project manager, Stanslas Sankhani. The Nyimba district’s traditional leader, Chief Ndake, and his subjects have embraced solar-power as a stop-gap measure before Zambia’s rural electrification program extends to their area. He said the district had potential, as it was endowed with fertile soil and a fair amount of precious stones, but this remained untapped due to the lack of electricity. The Energy Regulation Board (ERB), Zambia’s power regulator, is closely monitoring the Nyimba project and similar ones in Chipata, the provincial capital, and Lundaz, another Eastern province town. The ERB said there was a need to investigate energy alternatives, given the cost of connecting rural parts of the country to the national power grid. Currently, only 20 percent of Zambia’s total population, and just two percent of the rural population, has access to electricity. This is despite the fact that Zambia is a net producer and exporter of hydro-electricity. “We have to look at alternative means to provide power to people and this pilot project has scored a fair amount of success. We need a combination of approaches and a way forward to get most parts of Zambia electrified. In some areas it makes economic sense to electrify, or develop mini-hydros, while other places will be difficult to connect to the grid,” said ERB spokesperson, Agnes Banda. The government has set a target to achieve 50 percent access to electricity by the year 2010. In the case of isolated areas, solar-power could be an alternative. However, the main problem with solar energy is the relatively high initial investment costs, noted a report, ‘Issues and Options for Rural Electrification in Zambia’, released in March 2002. But the document, prepared by CORE International, a US Agency for International Development partner, recognised the usefulness of solar power in rural areas – particularly for electrifying villages, pumping water and refrigeration in health clinics. CORE International described solar as a practical alternative to extending power distribution lines to remote and low-density populations. “It has been widely used in rural areas around the world. It has also been used in many urban areas because of its environmental benefits and its potential to reduce demand for fossil fuels,” the report noted. Article courtesy of the United Nation’s Integrated Regional Information Network.