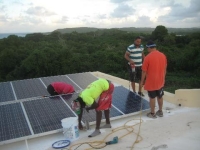 A sail off on the distant horizon; soothing, cool ocean breezes and swaying palms; white, sugar-sand beaches — who hasn’t dreamed of living the good life on a Caribbean island? The Caribbean islands have a strong, elemental attraction for many of us from colder, more temperate and overcast climes. For those who have ventured beyond a one, two or even three-week Caribbean vacation — or who may even have tried to fulfill their Caribbean dream — the reality, and practicalities, of life in the Caribbean can contrast sharply, even shockingly, with our idyllic visions.

That’s not to say those idyllic elements don’t exist, but becoming a permanent, or even semi-permanent, member of a Caribbean island community and society requires determination, plenty of patience and perseverance — along with healthy doses of skepticism, ingenuity and adaptability. Coming with open eyes, ears, and an open mind and heart can also help ease the transition. And as growing numbers of expats are discovering, so can installing a home solar-battery storage system.

Like many other expats, Bob and Susan first came to the small country town of Luperon on the Dominican Republic’s (DR) North — now “Amber” — Coast in search of a simpler, better life. About an hour’s drive from the provincial capital of Puerto Plata, Luperon is home to a well-sheltered marina and small expat community living alongside local merchants, shop owners, cattle ranchers and dairy farmers, fishermen and their families.

For Bob and Sue, building a home in this quiet, mostly peaceful town set amidst lush, green fields and semi-forested hills hard on the Caribbean coast was like a dream come true. Transforming that dream into a reality has meant paying a lot in the way of dues, however.

Among the many trials and tribulations experienced while building their Caribbean dream home was dealing with the notoriously high-priced and intermittent supply of grid power. Their decision to install a home solar PV-battery storage system wasn’t so much a matter of preference or “green living” as it was a matter of necessity. 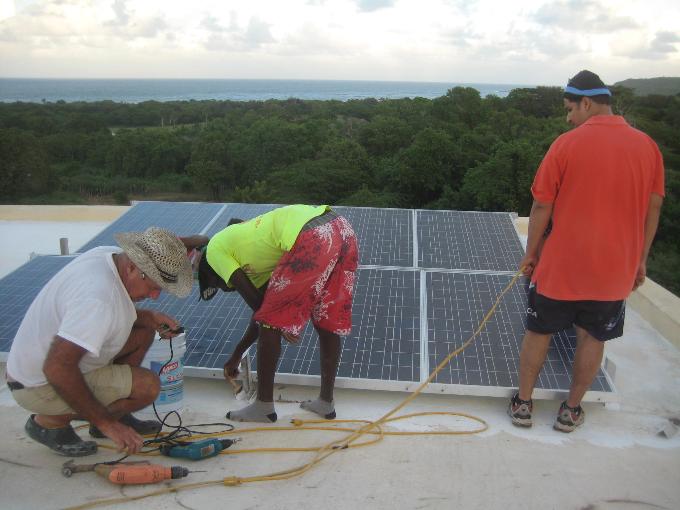 Bob and a small local crew relocate some of the solar PV panels atop Bob and Susan’s home, aptly named the “Casa del Sol,” in Luperon, DR.

“The one day of the year you can be assured you’ll have grid power is Christmas,” Susan told REW “Or,” as Bob added, “when a bigwig is in town.” Even when the grid is up, voltage can vary widely, taking a harsh toll and compounding the degrading effects of the hot, humid climate and salt-laden air on any kind of electric and electronic device.

Bob worked with a local electrician and electronics aficionado, Otoniel Guzman, owner/operator of Smart Electric Solutions, to install their home solar-battery storage system. It consists of 28, 230-240-watt silicon solar panels — a mix of Sharp and BP — wired in strings of four on the rooftop of the contemporary, 3,500 square foot Spanish-style home Bob and his wife Susan completed two years ago.

Even here in the Dominican “campo,” today’s travelers expect to find the modern conveniences a constant supply of electricity affords, such as cell phone and Wi-Fi connectivity. And being “do-it-yourself-ers,” Bob maintains a well-equipped workshop and runs a home-based motorbike rental and sales business. “We have to have power,” Susan put it simply.

Two charge controllers manage the flow of electricity between the strings of rooftop solar panels and the three banks of eight, 6-volt lead-acid batteries that serve as the Bob and Sue’s primary power supply. Otoniel built the converter/inverters, which carry his Smart Electric Solutions label.

One inverter converts utility line AC to DC electricity to charge the battery banks. A second serves as a back-up to the first, and more importantly, inverts DC battery storage to AC electricity for use throughout Bob and Susan’s home, apartments and Bob’s workshop — the equivalent of about three households. 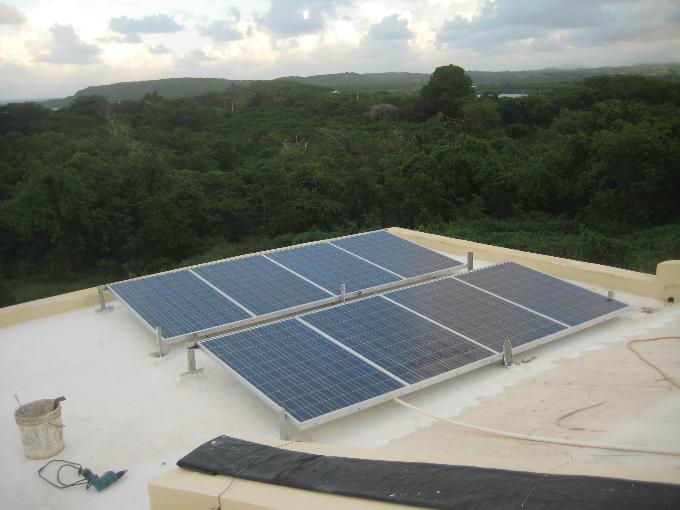 Running off electricity supplied by the battery banks, Bob has insulated the property from utility line power in order to assure a more secure, reliable and steadier flow of electrical power. Sine-wave inverters would provide a more reliable, higher quality flow of electricity, but they have to be bought and shipped in from outside the DR, and they’re subject to tariffs that make them that much more expensive, Sue and Bob explained.

Up and running for two years with the second inverter installed, Bob and Susan’s home solar-battery storage system meets nearly all of their daily electricity needs. “If I want to run my arc welder, I start my generator,” Bob said.

Besides their roughly 2,000 square foot two-bedroom home, the happily married couple rent out two good-sized efficiency apartments on the main house’s lower level, plus a large, detached studio apartment atop a garage/storage shed. All have kitchenettes, mini-fridges, ceiling fans and Wi-Fi. Air conditioning isn’t in the mix.

Bob said they have invested around $15,000 in their home solar-battery storage system to date. That includes having to rebuild an inverter twice following lightning strikes. In one instance, “we had the city power on, and it came in through the city power line,” Bob recounted. The other “was a close strike, and we didn’t have the power on, but it got us anyway.”

Though they still have to draw power from the grid — typically during the winter rainy season — Bob and Susan’s monthly utility bills have dropped significantly. The couple were paying around $225/month in utility bills in the high season when most or all of the apartments were rented.

With the newly configured solar PV-battery storage system, their monthly utility bill never exceeds $50. “And it’s more like zero during the summer, or $1, and that’s for the meter,” Bob told REW. “I can run the entire summer, when we might have one renter, on stored energy from the PV panels.”

The couple figure they will recoup their entire investment in 3-1/2 to four years. With an expected life for the PV panels of 20 years or more given proper maintenance, Bob and Susan will be enjoying practically free electricity for many years to come.

Like Bob and Susan, Christian P. decided to install a home solar-battery storage system to assure a  more reliable, higher quality and less expensive flow of electricity. Set in the low hills outside the popular tourist town of Sosua, stored solar energy supplies anywhere from two-thirds to three-quarters of the electrical power needs for Christian and his long-time girlfriend Altgracia’s 600 square meter (~6,600 sq. ft.) home and property.

A practically-minded entrepreneur and property developer, Christian and a friend came across a supply of 800 Mitsubishi thin-film, amorphous silicon PV panels — surplus from a large-scale PV project in Italy — by way of a mutual friend in the import-export business. Seeing this as an opportunity to install solar PV-battery storage systems in their own homes as well as turn a profit by selling them to local contractors and solar panel distributors, the trio negotiated a price that enabled them to accomplish both goals. 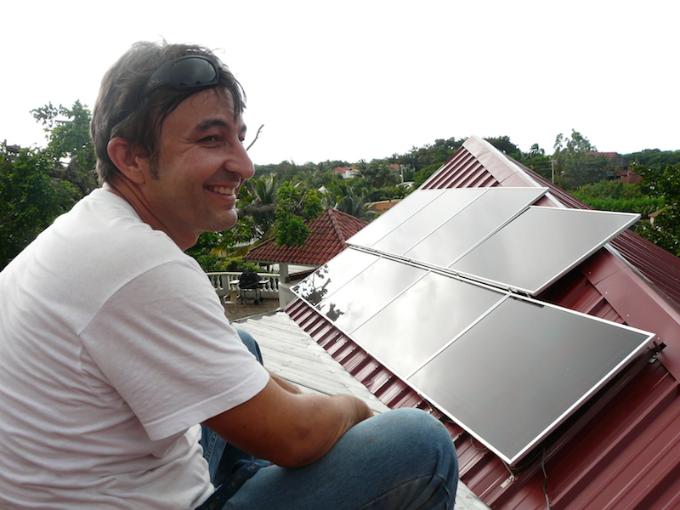 Christian P. and his solar PV installation in Sosua, DR.

A DIY sort of guy, Christian and Francis, a young, local Haitian handyman, installed the 28, 130-W amorphous silicon PV panels on the roofs of his home. Routed through an Outback charge controller, they charge two banks of eight 6-volt lead-acid batteries.

A locally supplied 8-kW inverter supplies 110/220V AC electricity throughout the property, which includes a main four bedroom house and two separate one-bedroom apartments. It also powers well-water and pool pumps, as well as a small aquaponics system Christian is experimenting with.

Also running into the inverter is a utility power line, which Christian taps into on a nightly basis to charge his battery banks. A separate solar water heater meets nearly all the property’s hot water needs.

While still experimenting by shifting panels around the inclined Spanish-style roofs of his home, the PV-battery storage system has been reliably meeting 65-75 percent of Christian’s electricity needs for about a year now.

As Bill and Susan do, Christian supplements his income by renting out three large en-suite bedrooms in his four-bedroom house. He also rents a detached one-bedroom apartment, while his father, Willy, lives in another. 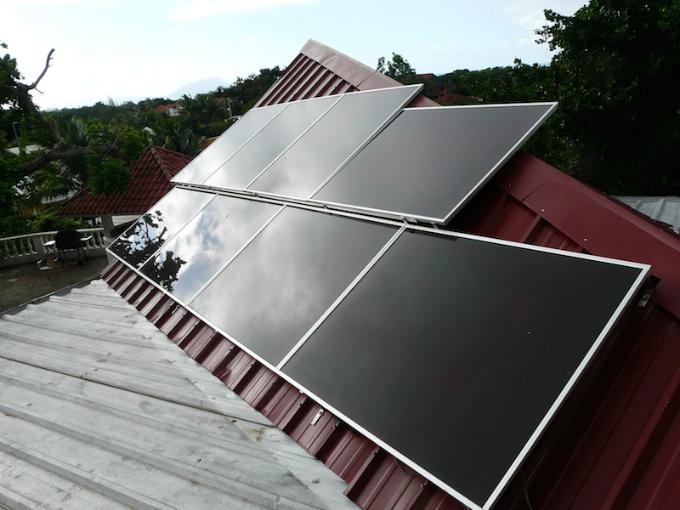 Having invested some $6,000 plus his own time and labor in his home solar-battery storage system, Christian says they system will pay for itself in two years or less. He estimates he’s saving between $300 to over $400 on his monthly utility bills.

Furthermore, enhancing the quality, reliability and security of electricity saves on wear and tear of the variety of electric appliances, equipment and electronic devices in use — from water pumps and heaters, lighting fixtures, refrigerators and freezers to electric tools, TVs, fans, Internet routers and computers.

Installing home solar PV-battery storage systems also helps the two couples’ apartment/room rental businesses. Besides the offer of staying in beautiful, modern homes on a Caribbean island, some guests are attracted by the “green living” aspect of staying in a solar home. For those aware of the high cost, generally poor quality and intermittent supply of grid power in the DR, the energy security the home solar-battery storage systems provide can be a deciding factor when choosing a place to stay.

Taken together, all the savings and advantages of installing home solar-battery storage systems provide the two couples with another intangible, yet still very substantial, benefit: peace of mind. And at the end of the day, all three take satisfaction in knowing that in their own, small way they’re helping protect the natural environment that still makes the North Coast and the Dominican Republic a special place.

Amid forecasts of explosive growth, the lower costs and multiple other benefits of solar PV-battery storage systems as compared to traditional fossil fuel-driven energy systems is becoming more and more apparent. In the U.S., leading home solar installation companies such as Solar City, SunPower and others are working to develop affordable home solar-battery storage systems that could fuel development of a mass market.

There has also been a lot of research, development and discussion in the energy, international development and politics-economics communities regarding the potential for lesser-developed and developing nations to “leapfrog” fossil fuel energy and build healthier, more sustainable economies and societies by aggressively deploying integrated renewable energy-energy storage microgrids.

As the experience of expats in the Caribbean and other locations where grid power is unavailable, unreliable or prohibitively expensive attests, home solar-battery storage solutions are already attractive investments, providing cheaper, higher quality and more reliable electrical power than fossil-fuel generation assets, as well as other benefits that extend well beyond homeowners’ financial bottom lines.