Suddenly, we have seen a spate of “death spiral” talk about electric utilities. Grid parity — through lowered costs — is supposedly triggering this decline. Homes are expected to defect from the grid, or maintain a limited link with it for reliability, thanks to solar panels backed up by batteries and gas-generators.

The argument: As households reduce their use of grid electricity using solar, the customer base needed to cover the utilities’ fixed costs drops, thereby increasing rates. The increased rates create incentives for more customers to deploy solar to reduce their bills, thus reinforcing progressive grid abandonment.

Contrary to such expectations, however, a REW article by Jake Rozmaryn states, “despite the seemingly obvious fiscal choice to switch to solar, it still remains an exceedingly hard sell. Part of that is due to the soft costs, which inflate the installation price tremendously. Cost perception is monumental for someone to make the switch.”

While lowered costs, hard or soft, help, they are a necessary but insufficient condition for residential solar to take off. What also limits the industry is that it confronts the market schism described in Geoffrey Moore’s 1991 classic, Crossing the Chasm(Figure 1).

Based on Geoffrey Moore (1991) Crossing the Chasm. Harper Business Essentials.

Let us segment the market following Moore and as shown above in Figure 1. To “innovators” and “early adopters,” let us add a 5 percent segment specific to the residential solar industry that consists of  “families with young children.” They use organic food for their preschoolers, possess college degrees, and have taken environmental science courses in high school and college.

The focus of residential solar deployment is concentrated on the first three segments amounting to ~20 percent. Since we are in the early stages of the industry, growth rates are high on a small base. This calls for caution. Moore’s thesis states that we may not rely on this segment alone; it is unlikely to be large enough.  For a business to flourish, it needs success with the “early majority.”

Moore argues that a gap exists between the early adopters of a new technology and the mass market. Many new technologies initially get pulled into the market by enthusiasts yet fail to gain wider adoption. The early majority typically thinks and researches, talks and consults, but does not readily buy. To reach them, companies need strategies to cross the chasm.

Grid parity presents little incentive for residential customers in the early majority. Electricity works reliably, and their bills are not huge when compared to wages. Climate change cannot compel solar deployment. The industry needs business drivers beyond lower costs to drive adoption. Given these segment attributes, the residential solar industry must brace for a lull in growth. 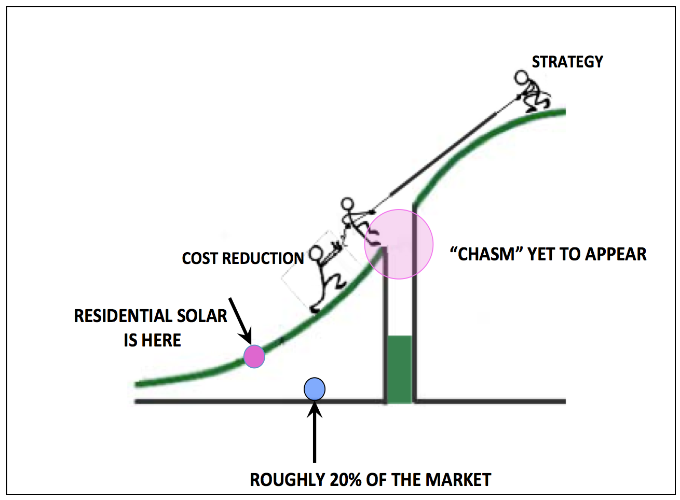 Cost reductions – solar panels and balance of systems – necessary but insufficient conditions for grid defection and solar takeoff. Modified from a presentation at Brown University by A123 Systems, 2012.

The “S” curve in Figure 2 shows the “latent market” stage — the slowly growing part of the industry that includes the residential solar market.

Many people in the industry make an erroneous comparison with telecom, claiming electricity customers going off grid is analogous to telephone customers going wireless. Writes Stephen Lacey: “Utilities may soon be on the verge of a “death spiral” as more customers leave the grid and implement distributed energy technologies like solar. A similar shift happened in telecom as the rise of mobile phones made copper lines nearly obsolete.”

This “cutting the cord” argument is unwarranted because, unlike telecom, the electricity business does not have a new, compelling, mass-market product like the cellular smartphone — representing a new service and requiring a new infrastructure — for customers to embrace.

The movement toward renewables is instead back-office substitution, not the introduction of a new consumer product. Grid parity is not about customer choice by walking the aisles of Sears, Best Buy, Home Depot, or Costco. Deploying solar may appear toparallel buying a refrigerator, cooking range, or a smartphone, but it is not.

Solar panels look dark, intimidating, and geeky to a consumer. They are a component of an industrial value chain, and not a consumer good. Even when the swap of renewable for traditional electricity occurs, the customer’s electricity experience remains the same as before, unlike telecom.

As solar photovoltaics attain grid parity, it signals to the electric utilities that they now have an additional choice for electricity generation beyond traditional coal or gas. Given that solar photovoltaic prices are likely to fall further and fossil fuel prices will likely rise, it makes sense for utilities to introduce solar in their generation mix. Grid parity means solar now substitutes and complements electricity generation by other means.

As lower-cost substitutes, solar benefits the utilities by bringing down their overall cost structure. With or without Renewable Portfolio Standards (RPS), utilities have reason to deploy solar. This is what NRG Energy appears to be doing, and what all electric utilities might do. And the sequence of deployment priorities is clear — grid-tied first, followed by businesses, and finally, residential customers.

If customers do defect, they might defect to the utility itself; why would they go to new service providers? The inevitable industry restructuring — metamorphosis — will be done by the utilities, just as telecom companies did, nudged by public policy and technology shifts.

The apocalyptic talk about the death and disruption in the electric utilities business has been gathering momentum. Here is a select list of writings on the theme:

We love disruption on occasion. When the current state of a market appears ill-suited to transformed needs, and yet companies in the domain enjoy power due to incumbency, incremental change appears insufficient. In Omar Khayyam’s words, we wish:

To grasp this sorry Scheme of Things entire,
Would not we shatter it to bits — and then
Re-mould it nearer to the Heart’s Desire!

We would like to rebuild a new structure from first principles. We seek destruction and reconstitution. The traditional foundations that regulated electric utilities — the natural monopoly argument and economies of scale — are broken; it is unclear how the new industry structure will emerge. Hence the appeal of disruption and “death spiral.”