WASHINGTON, D.C. — “Machine Gun Kelly,” Al Capone, the “Birdman” — Alcatraz prison has had some infamous residents on the craggy island known as “The Rock” in the middle of San Francisco Bay. 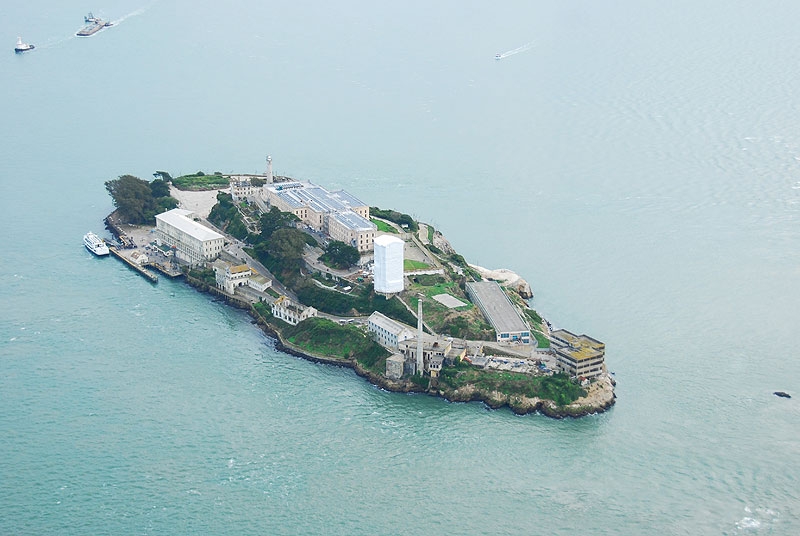 Alcatraz Island in San Francisco Bay is referred to as “The Rock” and was home to a notorious prison for 75 years. NREL recently helped the National Park Service and the DOE Federal Emergency Management Program transform the island’s electricity source from diesel fuel to photovoltaic panels on the rooftop of the Cellhouse building.

Now, the prison is host to 1,300 solar panels, powering lights and appliances that for three-quarters of a century were powered by diesel fuel ferried across the bay.

The panels are part of an effort by the National Park Service(NPS) and the U.S. Department of Energy’s (DOE) National Renewable Energy Laboratory (NREL) to bring clean energy to national parks and landmarks.

Blackberries and honeysuckles still grace Alcatraz Island, and black-crowned night herons and slender salamanders still circle above and below. But diesel fuel use has been slashed, and that means far less corrosion of pipes and smokestacks, and less pollution in the bay.

Instead, a 307-kilowatt photovoltaic (PV) array sits on the roof of the main Cellhouse building, attached to two 2,000-amp-hour battery strings and an inverter plant. The new 1,300-panel system produces close to 400,000 kilowatt-hours of electricity a year, reducing carbon dioxide (CO2) emissions by about 337,000 kilograms a year and reducing the time the generator runs from 100% to 40%. The NPS also made some energy efficiency changes, such as better light bulbs and changes in operation to reduce energy consumption.

A massive solar battery system helps power the island when the sun doesn’t shine — and it, too, is hidden from the view of the 1.4 million visitors the island and prison get each year.

The $3.6 million project was funded by the American Reinvestment and Recovery Act — and, importantly, it is saving money. The cost of transporting diesel fuel to the island (maintenance costs and the price of the fuel itself) boosted the cost of electricity for the island to about 76 cents a kilowatt-hour, said Andy Walker, a senior engineer and task leader for design assistance in the DOE Federal Energy Management Program(FEMP) at NREL. The PV project brings that cost to 71 cents a kilowatt-hour, and that includes the capital costs of buying the solar panels and erecting them on roofs. 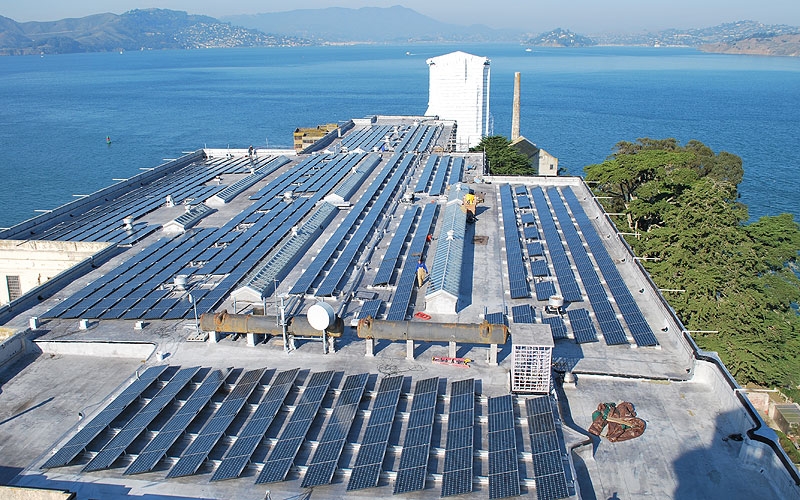 The National Park Service decided to put the solar panels on Alcatraz’s Cellhouse building because they are less visible to tourists than they would have been on the New Industries Building. The solar panels replace diesel-powered electricity and will save money — as well as 337,000 kilograms a year of carbon dioxide.

The project was a long time coming.

NREL’s involvement began in 1995, when FEMP enlisted NREL’s Applying Technologies team to monitor the strength of the sun at the island, do a feasibility study, and mock up what a solar installation would look like from up close and from across the bay.

FEMP and the NPS contracted with the Sacramento Municipal Utility District (SMUD) to install PV on Alcatraz’s New Industries Building and sell power to NPS for a penny less per kilowatt-hour than what it was costing for diesel electricity.

SMUD got as far as putting a new roof on Alcatraz’s New Industries Building and installing roof stanchions to hold the solar panels.

But a historic landmark group protested that the solar panels would be too visible. They could be seen by tourists from an exit door in the exercise yard — and that would mar the historic nature of the New Industries Building, where Al Capone once worked a sewing machine, and Machine Gun Kelly did the laundry.

The Cellhouse became a possible alternative because its roof was less visible from the ground or from the bay.

The NPS asked SMUD to put the panels on the Cellhouse roof, but SMUD wanted a guarantee that this time the panels would be up for good. The best the NPS’s Advisory Council for Historic Preservation could say was that it had “no objections at this time” to the solar panels being on the Cellhouse roof. That wasn’t enough assurance for the utility, and it dropped out of the project.

“It’s ironic,” Walker said, “because when the National Park Service was contemplating doing it on its own, they assumed that the Cellhouse would be considered more iconic than the New Industries building.” It turned out that there were fewer objections to panels being on the Cellhouse.

The NPS envisioned solar panels on both the New Industries Building and the Cellhouse, but problems with nesting birds and the visibility of the panels delayed installation, said NREL’s Byron Stafford. Happily, the progress made by the PV industry over the years — primarily higher-efficiency PV panels — made it possible to put the entire PV system on the roof of the Cellhouse, where it is less visible.

Kent Brogger, the former project manager on the Alcatraz project for the NPS, said “the expertise of NREL has been of great value” in coming up with a green solution for an island so isolated that electricity needs had been provided by diesel generators. 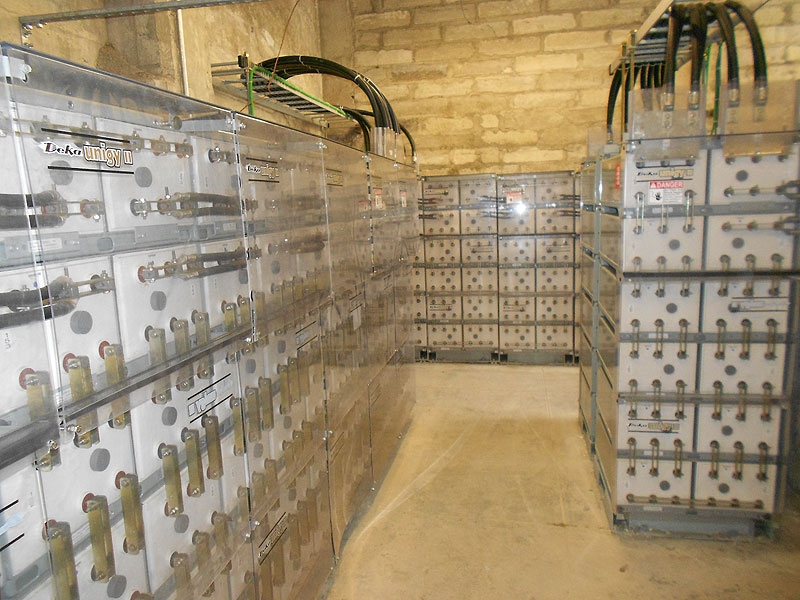 The battery storage system is integral to the solar panel project on the roof of the main Cellhouse building at the prison on Alcatraz Island.

NREL has helped the NPS with several projects, either through interagency agreements or NREL’s Work for Others program: “Right now, we’re helping to commission PV, solar hot water, and hydro-turbines at Mesa Verde National Park’s museum,” Walker said. Other projects include PV and ground-source heat pumps at the new Flight 93 Memorial in Shanksville, Pennyslvania, and a study of the PV systems at Buckler Meadows in Yellowstone National Park.

“We’ve had great support from NREL,” Paul Cloyd of the NPS said.

NREL is also integral to the effort by several military bases to achieve net-zero energy. And the lab has helped cities and towns recover from natural disasters to become leaders in clean technology.