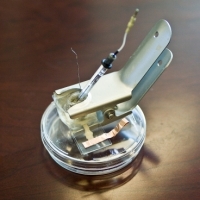 Cambridge, MA, USA — Plants are good at doing what scientists and engineers have been struggling to do for decades: converting sunlight into stored energy, and doing so reliably day after day, year after year. Now some MIT scientists have succeeded in mimicking a key aspect of that process.

One of the problems with harvesting sunlight is that the sun’s rays can be highly destructive to many materials. Sunlight leads to a gradual degradation of many systems developed to harness it. But plants have adopted an interesting strategy to address this issue: They constantly break down their light-capturing molecules and reassemble them from scratch, so the basic structures that capture the sun’s energy are, in effect, always brand new.

That process has now been imitated by Michael Strano, the Charles and Hilda Roddey Associate Professor of Chemical Engineering, and his team of graduate students and researchers. They have created a novel set of self-assembling molecules that can turn sunlight into electricity; the molecules can be repeatedly broken down and then reassembled quickly, just by adding or removing an additional solution. Their paper on the work was published on Sept. 5 in Nature Chemistry.

Strano says the idea first occurred to him when he was reading about plant biology. “I was really impressed by how plant cells have this extremely efficient repair mechanism,” he says. In full summer sunlight, “a leaf on a tree is recycling its proteins about every 45 minutes, even though you might think of it as a static photocell.”

One of Strano’s long-term research goals has been to find ways to imitate principles found in nature using nanocomponents. In the case of the molecules used for photosynthesis in plants, the reactive form of oxygen produced by sunlight causes the proteins to fail in a very precise way. As Strano describes it, the oxygen “unsnaps a tether that keeps the protein together,” but the same proteins are quickly reassembled to restart the process.

This action all takes place inside tiny capsules called chloroplasts that reside inside every plant cell — and which is where photosynthesis happens. The chloroplast is “an amazing machine,” Strano says. “They are remarkable engines that consume carbon dioxide and use light to produce glucose,” a chemical that provides energy for metabolism.

To imitate that process, Strano and his team, supported by grants from the MIT Energy Initiative and the Eni Solar Frontiers Center at MIT, produced synthetic molecules called phospholipids that form disks; these disks provide structural support for other molecules that actually respond to light, in structures called reaction centers, which release electrons when struck by particles of light. The disks, carrying the reaction centers, are in a solution where they attach themselves spontaneously to carbon nanotubes — wire-like hollow tubes of carbon atoms that are a few billionths of a meter thick yet stronger than steel and capable of conducting electricity a thousand times better than copper. The nanotubes hold the phospholipid disks in a uniform alignment so that the reaction centers can all be exposed to sunlight at once, and they also act as wires to collect and channel the flow of electrons knocked loose by the reactive molecules.

The system Strano’s team produced is made up of seven different compounds, including the carbon nanotubes, the phospholipids, and the proteins that make up the reaction centers, which under the right conditions spontaneously assemble themselves into a light-harvesting structure that produces an electric current. Strano says he believes this sets a record for the complexity of a self-assembling system. When a surfactant — similar in principle to the chemicals that BP has sprayed into the Gulf of Mexico to break apart oil — is added to the mix, the seven components all come apart and form a soupy solution. Then, when the researchers removed the surfactant by pushing the solution through a membrane, the compounds spontaneously assembled once again into a perfectly formed, rejuvenated photocell.

“We’re basically imitating tricks that nature has discovered over millions of years” — in particular, “reversibility, the ability to break apart and reassemble,” Strano says. The team, which included postdoctoral researcher Moon-Ho Ham and graduate student Ardemis Boghossian, came up with the system based on a theoretical analysis, but then decided to build a prototype cell to test it out. They ran the cell through repeated cycles of assembly and disassembly over a 14-hour period, with no loss of efficiency.

Strano says that in devising novel systems for generating electricity from light, researchers don’t often study how the systems change over time. For conventional silicon-based photovoltaic cells, there is little degradation, but with many new systems being developed — either for lower cost, higher efficiency, flexibility or other improved characteristics — the degradation can be very significant. “Often people see, over 60 hours, the efficiency falling to 10 percent of what you initially saw,” he says.

The individual reactions of these new molecular structures in converting sunlight are about 40 percent efficient, or about double the efficiency of today’s best solar cells. Theoretically, the efficiency of the structures could be close to 100 percent, he says. But in the initial work, the concentration of the structures in the solution was low, so the overall efficiency of the device — the amount of electricity produced for a given surface area — was very low. They are working now to find ways to greatly increase the concentration.

Philip Collins ’90, associate professor of experimental and condensed-matter physics at the University of California, Irvine, who was not involved in this work, says, “One of the remaining differences between man-made devices and biological systems is the ability to regenerate and self-repair. Closing this gap is one promise of nanotechnology, a promise that has been hyped for many years. Strano’s work is the first sign of progress in this area, and it suggests that ‘nanotechnology’ is finally preparing to advance beyond simple nanomaterials and composites into this new realm.”

David Chandler is a writer in the MIT News Office.