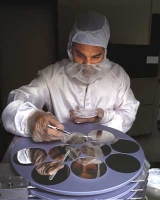 St. Louis, Missouri & Washington, DC [RenewableEnergyAccess.com] A photovoltaic (PV) cell achieved a milestone earlier this week with a conversion efficiency of 40.7 percent. Produced by Spectrolab, Inc. — a wholly owned subsidiary of Boeing — and funded in part by the U.S. Department of Energy (DOE), the breakthrough could lead to PV systems with an installed cost of $3 per watt and produce electricity at a cost of $0.08 to $0.10 cents per kilowatt-hour.

The 40.7 percent cell was developed using a structure called a multi-junction solar cell. This type of cell achieves a higher efficiency by capturing more of the solar spectrum. In a multi-junction cell, individual cells are made of layers, where each layer captures part of the sunlight passing through the cell — allowing the cell to absorb more energy from the sun’s light. According to Spectrolab, high efficiency multijunction cells have an advantage over conventional silicon cells in concentrator systems because fewer solar cells are required to achieve the same power output. “These results are particularly encouraging since they were achieved using a new class of metamorphic semiconductor materials, allowing much greater freedom in multijunction cell design for optimal conversion of the solar spectrum,” said Dr. Richard R. King, principal investigator of the high efficiency solar cell research and development effort. “The excellent performance of these materials hints at still higher efficiency in future solar cells.” For the past two decades researchers have tried to break the “40 percent efficient” barrier on solar cell devices. In the early 1980s, DOE began researching what are known as “multi-junction gallium arsenide-based solar cell devices,” multi-layered solar cells which converted about 16 percent of the sun’s available energy into electricity. In 1994, DOE’s National Renewable Energy laboratory broke the 30 percent barrier, which attracted interest from the space industry. Most satellites today use these multi-junction cells. “Reaching this milestone heralds a great achievement for the Department of Energy and for solar energy engineering worldwide,” Alexander Karsner, Assistant Secretary for Energy Efficiency and Renewable Energy at the U.S. DOE. “We are eager to see this accomplishment translate into the marketplace as soon as possible, which has the potential to help reduce our nation’s reliance on imported oil and increase our energy security.” Almost all of today’s solar cell modules do not concentrate sunlight but use only what the sun produces naturally, what researchers call “one sun insolation,” which achieves an efficiency of 12 to 18 percent. However, by using an optical concentrator, sunlight intensity can be increased, squeezing more electricity out of a single solar cell. “This solar cell performance is the highest efficiency level any photovoltaic device has ever achieved,” said Dr. David Lillington, president of Spectrolab. “The terrestrial cell we have developed uses the same technology base as our space-based cells. So, once qualified, they can be manufactured in very high volumes with minimal impact to production flow.” Development of the high-efficiency concentrator cell technology was funded by NREL’s High Performance Photovoltaics program and Spectrolab.