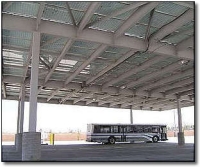 Global Solar Energy has designed and installed a photovoltaic (PV) canopy that generates power while shielding up to 20 buses from the hot desert sun. Global Solar completed the canopy in March 2004 for the Antelope Valley Transit Authority, which provides bus service in the high desert communities of Antelope Valley, California.

Tucson, Arizona – May 20, 2004 [SolarAccess.com] The system will generate 190,000 kilowatt hours of power a year, reducing the authority’s electric bills while providing valuable shade in an environment where summer temperatures routinely exceed 100 degrees Fahrenheit. “When those buses are parked in the afternoon sun, they get so hot that drivers have to run the air conditioners for a long while before the vehicles are cool enough to pick up passengers,” Global Solar President Michael S. Gering said. “So this canopy will help the transit authority save money on fuel as well as utility costs.” The canopy, which covers nearly 11,000 square feet, includes 405 ASE 300/DGF modules, a Xantrex PV100208 DC to AC inverter and a 125kVA 208/480 high efficiency step-up isolation transformer. The roof is composed entirely of solar panels, allowing the transit authority to maximize the rebate benefits available for photovoltaic structures. The system will allow the transit authority to reduce its monthly operating expenses while contributing to a cleaner environment. By reducing the authority’s need for energy produced by fossil fuels, the system will effectively offset the production of more than 200,000 pounds of greenhouse gasses each year.